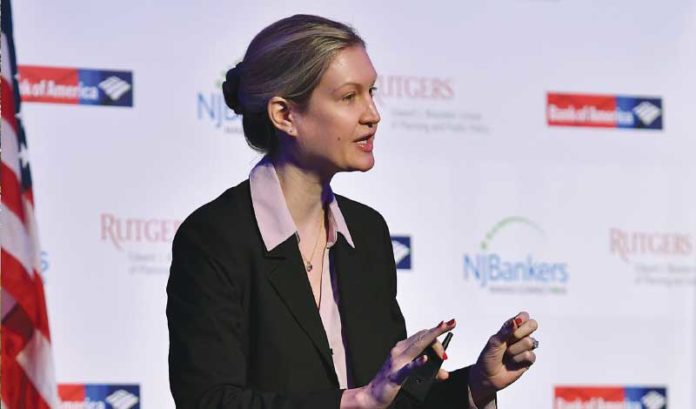 Constance Hunter spends her days analyzing global economic factors and how they might affect business performance for one of the Big Four financial services firms.

But, she said you won’t find her or any of her female counterparts’ work discussed in many academic classrooms.

“The lack of representation of women in economics textbooks may seem trivial, but it is a big deal,” Hunter, chief economist at KPMG, said after delivering her economic outlook at KPMG’s 2018 Women and the Economy event, recently hosted by the firm’s Short Hills office at Kean University in conjunction with KPMG’s Network of Women and New Jersey Women’s Network-to-Network.

“What we represent to younger generations is what they then aspire to.”

Though KPMG has announced its intention to employ 30 percent women in partnership roles by 2020, Hunter, chief economist since 2013, said this is not yet typical of her industry — nor many others.

“With women having been participating in the labor force more and more since the 1960s, women now make up (nearly) 50 percent of the workforce,” Hunter said. “Given that we are close to parity and that women have steadily been earning more college degrees than men, we hopefully would see that distribution represented throughout the economy — yet, income gaps are prevalent at every single education level.”

Economics, however, is a key area in which women have not been earning more degrees than men.

According to the American Economics Association, women are just 28 percent of economics majors at the nation’s Top 100 universities, and there has been no increase in the share of women entering the pipeline to become professional economists since the turn of the century.

As a result, just 13 percent of academic economists in permanent U.S.-based roles are women.

She said the lack of women studying for financial roles further compounds the prevalence of unconscious bias in the industry.

“There are simply a handful of female chief economists, myself included,” Piegza said. “And there is this overwhelming feeling that women are not only the minority but also struggling to make roles for themselves in the male-dominated industry of finance.

“For example, I once gave a presentation and was met with a series of questions, one of which was from an older gentleman, who said, ‘You’re an economist? You don’t look like an economist.’

“He was referring to the fact that I am a relatively younger female, rather than what the typical stereotype for the industry is of an older, white male.”

The future of the industry — and the economy — depends on more young women pursuing careers in the fields of finance, accounting, mathematics and more, she said.

“There is no doubt a continued need to push young women into these fields,” Piegza said. “If we don’t, we’re doing ourselves a large disservice. The economy needs those skills, and we certainly can’t rely on our male counterparts to fill those jobs.”

Since 2012, she has spent her days — and sometimes nights, she said — analyzing the macroeconomic and legislative environment affecting commercial real estate markets.

That has been a welcome change, she said, from her days on Wall Street, where she worked as an executive with companies such as State Street, JPMorgan Chase, and Barclays.

“There are still plenty of deadlines, but perhaps not with the same intensity and pressure as there was on the trading floor,” Learner said. “People are not making decisions just seconds after economic data is released. In my industry, people are signing 10- to 20-year commercial leases, and so the decision-making processes have longer lead times. That lends itself to more long-term oriented analyses.”

The switch, she said, has allowed her more time and freedom to pursue outside interests, such as serving as a board member with the American Friends of the Israel Philharmonic Orchestra.

It also has allowed her, she said, to participate in some very interesting conversations — including the one surrounding the revitalization and redevelopment of Newark.

“My economic outlook for the city this year will be my most optimistic yet,” Learner said. “I think it’s increasingly becoming an attractive place for companies — perhaps, such as Amazon — who may view the opportunity to help remake a city as a positive, to locate and for people to live in.”

These important discussions represent the growing need for economists outside of financial services and Wall Street, she added, in industries in which women, especially, may be able to find more balance and flexibility.

“More and more firms in many industries where the demand for services is a factor of overall consumption are seeing the value in employing economists,” she said. “As an economist, I would make the argument that every field needs one.”

According to her research, Hunter said the U.S. wage gap — which remains one of the highest in the Organization for Economic Co-operation and Development at nearly 20 percent — is most prevalent just when women are about to reach pinnacle points in both their career and personal lives.

Piegza said that, as long as women are still predominantly the primary caregivers for children, labor force participation rates may continue to be unstable.

“When we look at the labor force participation rate, which is at a multidecade low, a good portion of dropouts are women,” she said. “If women can go out into the marketplace and make $1,000, but need to spend $1,200 in child care costs for the week, does it make sense for them to be away from their families?

“Furthermore, if that mentality is widely accepted, if I am a firm looking to fill a higher-level position, and there is a 28-year-old man and woman who are both ideal for the job, might I be concerned about her possibly entering family-building years?”

Piegza, a mother to a new infant son, said she, too, struggles to find balance.

“Work seems to overlap nearly 80 percent of my day, and, while I am certainly working to slow that progression, it is still very demanding,” she said. “The economy never sleeps. If I am not at work, I’m traveling, or I am thinking about work.

“Striking a balance may be one of the greatest challenges for women in this job. Being able to allocate as much time as is needed to my role as a chief economist while still being a mother and a wife is very difficult.”

How are business leaders feeling about 2019? JPMorgan survey says …