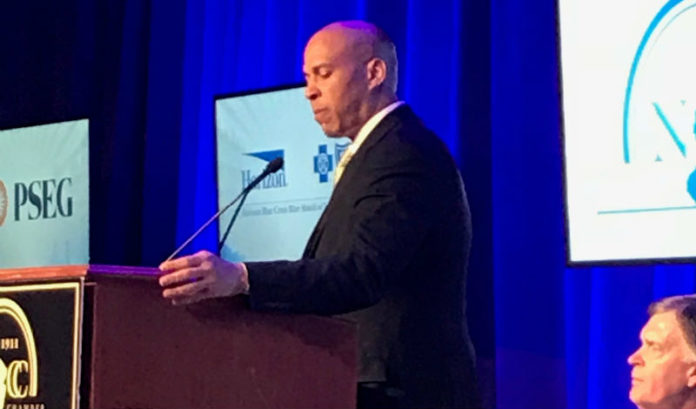 When U.S. Sen. Cory Booker went to Washington, he took the ideas that worked when he was mayor of Newark with him.

The result: Opportunity Zones, a new community development created by Booker (D-N.J.) and Sen. Tim Scott (R-S.C.) and placed in the Tax Cuts and Jobs Act of 2017.

The goal is to encourage long-term investments in low-income urban and rural census tracts — not cities — nationwide. In them, investors can take advantage of unrealized capital gains.

“When I was mayor of Newark, we were able to get the urban tax credit through, which was a huge tool in the toolbox to attract Panasonic and major corporations,” Booker told ROI-NJ last week during the Walk to Washington event.

“I have a lot of experience with how to attract a lot of business to the city. Now, I want to attract businesses to our state.”

Last Friday, New Jersey mayors were sent a letter encouraging them to express interest in the program.

Gov. Phil Murphy has until March 21 to nominate 25 census tracts to the U.S. Treasury.

Booker, in the letter, said New Jersey has plenty of areas that could benefit.

Hugo Neu’s Michael Meyer, the director of development for the company’s Kearny Point project, said his project is a perfect fit.

The Kearny Point project is 138 acres in South Kearny, between the Ironbound in Newark and Jersey City’s West Side, that Meyer is turning into a creative office redevelopment. Meyer feels having that area designated as an Opportunity Zone would have a huge impact on its development and return on investment.

“We’re about to launch into our next phase, which will include the reuse of one of those ship craneway buildings,” he said. “We will be turning it into 300,000 square feet of creative office. That project has estimated development cost of $110 million.

“We are in the process of pulling together the capital stack, and we are quite confident, if we get designated an Opportunity Zone, that at least $50 million of these funds would be able to go into that project and help accelerate the timeline.”

Meyer said Kearny Point is an example of what Opportunity Zones are all about.

“In order for this program to be most successful, the governor needs to find census tracts that have a large amount of investment opportunity,” he said. “There’s got to be underlying feasible economic return in each of these census tracts in order to attract capital.

“Because of the nature of our census tract — we’re largely commercial and industrial — there’s a large amount of viable investment economic opportunities that will benefit this low-income community.”

Meyer said becoming an Opportunity Zone also would speed up the project.

“It will help us accumulate capital investment more quickly,” he said. “We’ll be able to reach our capital stack goals sooner that we otherwise would, allowing us to build the project our more quickly.”

Booker said in the letter that the zones are one way of incentivizing companies to stop moving their money overseas.

“According to the Economic Innovation Group, over $2 trillion in unrealized capital gains are currently sitting idle on balance sheets and eligible for investment in Opportunity Zones,” the letter said. “In an era of capital moving overseas or going towards uses that don’t maximize opportunity for most Americans, our bipartisan legislation will help lower these barriers and jumpstart economic development and entrepreneurship by stimulating the flow of investment into the communities that need it most.”