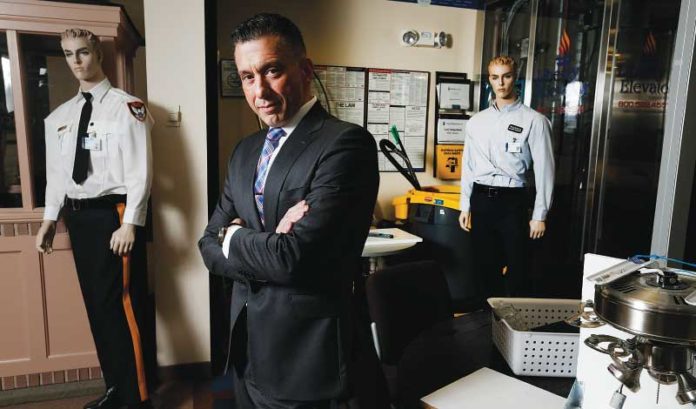 In New Jersey’s commercial and residential real estate properties, there was a quiet revolution playing out over the past decade.

It’s only so silent because of how minor it seems from the outside, but when nearly every property changes the way it operates, that’s no minor change.

The thrust of it is this: Buildings at one point had a singularly-focused security person manning the entry, and concierge people at the front desk who paid little attention to security. Those occupations have been brought together, largely due to the pioneering of Parsippany-based Planned Companies.

“Now, you have one well-rounded individual who looks out for safety while also providing basic concierge services, instead of having to have two different individuals for that at the front desk,” Chief Revenue Officer Dino Iuliano said. “It’s an idea that has taken off.

“Now you’ll find a lot of buildings — almost every building — will have a company providing them combined personnel.”

It’s a model the local company came up with 15 years ago.

“And, in the same way we revolutionized the industry over that time, we’re about to make that same big change in this sector by bringing in technology for the first time to these services,” Iuliano said.

The sheer size of the company puts to rest any doubt of it overstating its influence. Planned Companies has more than 3,300 employees and $120 million in annual revenue.

It has also been in existence for a long time — more than 100 years.

The janitorial, maintenance, concierge and security services company was founded in 1898 by the current owner’s great-great-grandfather as a simple window-washing operation.

Besides New Jersey, it also has a presence in Connecticut, New York, Pennsylvania, Delaware, Maryland, the District of Columbia, Virginia and even San Francisco — where a valued New York client begged the company to set up shop.

Iuliano said the company has grown through a 95 percent or better retention rate of clients, and, up to this point, simply word of mouth.

But, given the company’s large role in serving the region’s commercial and residential properties, it’s now wanting to tell people what Planned Companies is about.

“We know people have an interest in hearing about us, and there are so many opportunities to tell people our story,” Iuliano said.

During its century behind the scenes, the company never had a year it didn’t grow, even during financial downturns, he said.

“During the real estate market getting hit by the recession a decade ago — even if there (weren’t) new buildings coming on the market — the buildings we serve and others that were already up and running needed services we provide,” he said. “What we found is there will always be a need for these services.”

Those services are something the company is looking to improve on by infusing technology into the long untouched-by-tech areas of janitorial and property maintenance work. The company is rolling out software that can monitor, for example, when windows on a certain floor were last cleaned. That information can be used to make the work of the property’s staff more efficient.

It’s all being developed, tested and serviced in-house at Planned Companies, which sets it apart from what competitors have tried to do with the implementation of technology, Iuliano said.

“We’re really going to be using this to aid our growth, while also never forgetting our customer service background,” he said. “It’s a new, fresh day for the industry that we’re very excited about. And people are going to hear a lot more about Planned Companies.”

Industry
Brett Johnson -
March 8, 2021
The hospitality business owner grips his head in his hands, wishing he would've retired two years ago — so he didn't have to leave...