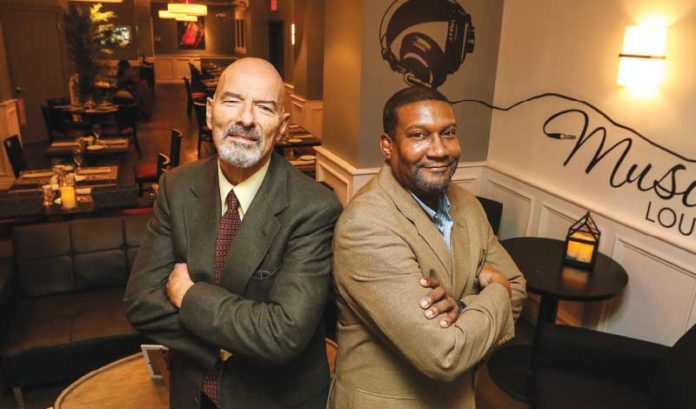 Newark was a different place more than half a century ago, Paul V. Profeta said.

It was a city where homegrown jazz vocalists such as Sarah Vaughan and many other legendary artists performed at venues such as The Cadillac Club and The Playbill.

It was a market in which the local record label, Savoy Records, produced musicians such as Charlie Parker and Fats Navarro and once held a recording session some called “the greatest jazz session,” featuring Parker, Dizzy Gillespie, Miles Davis, Curley Russell and Max Roach.

And it is a time that Profeta is helping to bring back today, most recently with the creation of Eleven Clinton/Smothered Blues, a farm-to-table soul food restaurant featuring live jazz performances each weekend.

“Eleven Clinton/Smothered Blues was created to evoke the feel of a traditional jazz club, a niche I felt was underrepresented in the current landscape of downtown Newark,” said Profeta, owner and president of Paul V. Profeta and Associates in West Orange, a leading real estate investment firm with millions of square feet in assets nationwide.

In his ongoing mission to help launch and expand minority businesses in Newark, Profeta enlisted Charles Hunter, seasoned restaurateur and general manager, to help him create the concept and pay homage to Newark’s deep musical roots.

“This is an endeavor with a lot of heart and soul,” Hunter said. “I immediately connected with Paul’s integrity and his altruistic mission to bolster business in the community and help along the renaissance and rejuvenation of Newark.

“That is what is driving this concept.”

Profeta said that, while he remembers growing up in Maplewood and taking the bus from his home to downtown Newark after school, those sorts of days quickly ended with the stigma of violence, stemming from the race riots of 1967.

“The fact that the public reacted so negatively for so long by staying out of Newark befuddled me,” he said.

There is absolutely no reason for that sort of hesitation today, he added.

“In Newark, we’ve got Amtrak, NJ Transit, the PATH train, five interstates, the busiest port and airport on the East Coast, and more than 50,000 students between Rutgers-Newark, New Jersey Institute of Technology, Seton Hall Law School, Essex County College and more,” Profeta said. “Newark has such an incredible set of assets that people often do not reflect on.”

One concern Profeta did have, he said, was the fact that, despite 280,000 people living in Newark — more than 140,000 of them being African-American — the number of minority-owned and -run businesses always has been incredibly low.

Profeta therefore invested millions of dollars into the Profeta Urban Investment Foundation to help revitalize Newark as a vibrant business, shopping and residential hub by increasing employment and local pride through minority-owned businesses.

More than a dozen applicants thus far have been provided with flexible interest-free loans and consistent business mentorship from the foundation.

“But Newark, especially, had been starving for the jazz that had been born and brought here,” Profeta said.

There are, Profeta said, monthly jazz Vespers services at Bethany Baptist church; WBGO, one of the biggest jazz radio stations in the country, is headquartered in Newark; and the Institute of Jazz Studies at Rutgers University-Newark boasts the most extensive library and archive of jazz music in the country and a new wine and beer bar, Clement’s Place, featuring monthly jazz performances.

But what Profeta really wanted was to see a minority-owned and -run jazz dinner club.

“It takes so many talents to run a restaurant, and you’ve got to hit it out of the park in each category due to the fact that there are just so many choices for consumers,” Profeta said. “It all must fit together — the food, the price point, the marketing, the ambiance, the décor, the service — to be successful.

“Plus, restaurants are high risk, with an astounding percentage of them failing within the first two years. Therefore, no institution will loan money to open a restaurant, with restaurants normally being launched with money from friends and family or venture capital.”

It was the only black-owned and operated restaurant in Newark at the time, Profeta said, until McPherson decided to return to her kitchenette full-time.

Profeta, however, would not become part of the popular statistic. Instead, he said, he regrouped — and discovered whom the Newark-based jazz club truly needed to be successful.

Charles Hunter was an accomplished Harlem-based restaurateur who had been looking for his own restaurant for years.

“I started as a cater waiter in Queens when I was 17 years old and eventually was opening up restaurants, such as Sag Harbor in New York, for Barbara Smith, before moving into corporate as East Coast regional manager for Bloomingdale’s Food Services,” Hunter said. “When I decided I wanted to pursue my own thing, the banks would treat my restaurant as a concept.

“They would say, ‘A restaurant is a figment of your imagination, and since we can’t know how good your imagination is, we can’t lend you the money. Why don’t you try borrowing from friends and family?’”

Instead, Profeta found Hunter, and he opened his restaurant concept in November of last year.

Eleven Clinton/Smothered Blues is open for both lunch and dinner, with live jazz performances on Friday and Saturday evenings, as well as Sunday brunch.

“We sometimes work with our good friend John Schreiber, president and CEO of the New Jersey Performing Arts Center, to help us source talent,” Profeta said. “Plus, we still have a lot of connections to local jazz talent from having started Duke’s, and Charles is close with WBLS radio in New York.”

The dining area and bar can seat 90, while a back room used mainly for private events can seat 25.

“We also cater on- and off-site events,” Hunter said. “For example, we recently hosted a cocktail party for Prudential Financial, and will continue to work with City Hall and the Visitor’s Bureau on their events as well.”

“We source locally from Profeta Farms in Flemington,” Hunter said.

While the restaurant’s main patrons include, of course, Newark residents and employees, Hunter said it is not unusual from travelers from the nearby Marriott Hotel to pop in on weekends, too.

“We had an engineer in town from the Midwest, for example, who was walking down the street when he heard the live jazz and came in,” Hunter said. “He came in every day after that for two weeks and brought his business associates with him.

“I feel like we are providing an education, in the simplest sense, on food, music and culture.”

It is just the beginning for what Newark will soon look, feel and sound like — everywhere.

Adding up all the planned, currently in-construction and purchased developments, Profeta said, comes to at least 10,000 residential units.

“That means we need to create whole new markets for a population of nearly 20,000,” he added.

That is why, Profeta said, he and Hunter are discussing opening future restaurants.

“Those 20,000 people are going to support more than one restaurant, and I hope we are the ones feeding most of them,” he said.

In the meantime, the duo said they plan to make Eleven Clinton/Smothered Blues the popular destination restaurant they always had intended it to be.

“Newark has turned the corner,” Profeta said. “By paying homage to this great city’s roots, I am confident that Eleven Clinton will become a place ‘to see and be seen’ before events at the Prudential Center and for an emerging after-work and weekend scene, helping to breathe a vibrant nightlife back into Newark.”

Hunter said he could not be prouder with what he is doing in his career.

“I really believe that we are the forefront of the renaissance of Newark and the dining culture that is soon to come,” he said. “I see nothing but a positive future ahead.”

“We currently are working to partner with a culinary school in the area, to create externship opportunities for graduates to spend a month or two here honing their skills and their crafts on-site,” he said.

And Hunter said he has his nearly 40 employees on the same path.

“I have told each staff member whom we have brought on board that when they are here, they are not just working, they are learning,” he said. “They will be learning different skillsets. If they were a dishwasher when they started, we want them to be a line cook when they leave.”