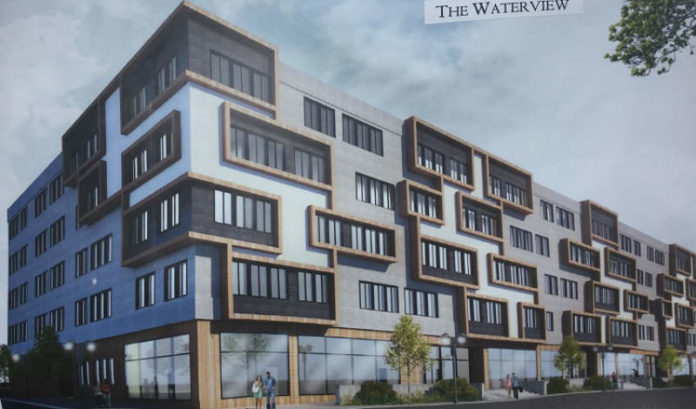 Bayonne Mayor Jimmy Davis announced Tuesday that the city of Bayonne sold a piece of land within the former Military Ocean Terminal that will become home to a new 97-unit luxury apartment complex.

The sale included an immediate $2.2 million payment to the city. Once completed, the building will generate $250,000 in tax payments per year.

The complex will be comprised of a mix of one- and two-bedroom apartments and will have retail on the first floor.

“This property was given to the city over 18 years ago and has remained vacant since that time, not paying any taxes or creating any economic activity. But that all changes now,” Davis said. “Along with the recently announced Costco and Atlantic Realty’s project of 525 residential units, all three of these projects will be underway this spring. Together, the three developments will generate over $2 million in annual taxes on land that essentially has been tax-exempt since it was created by the U.S. Army in the 1930s, representing a tremendous win for Bayonne taxpayers.”

(READ MORE from ROI-NJ on Bayonne’s deal with Costco)

The developers of the site are currently negotiating a lease with a well-known, but undisclosed, restaurant, the city said.

“We are excited to be part of the revitalization of Bayonne and look forward to being part of the community for years to come. The potential for MOTBY is unlimited with amazing water views,” said Shaun Gupta, CEO of Mahalaxmi Bayonne LLC.