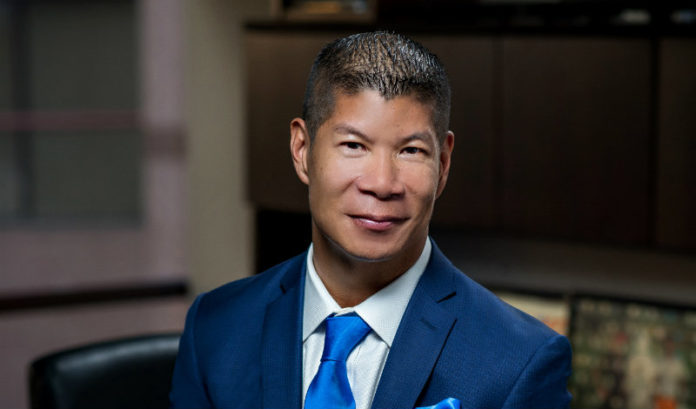 Eric Poe laughs when he recalls the many times his ads have made people angry.

As the head of Princeton-based Cure Auto Insurance, he loves selling auto insurance through unusual ads that push boundaries.

Like the one where a man, through his comments, obviously has been cyberstalking an old friend. At the end of ad, Poe hits the punch line: Don’t follow too closely when driving.

Or the one where a son, sitting with his father, who is lying on his deathbed in a hospital, fails to hear dad’s last words of advice before he flatlines because the son is looking at the attractive nurse in the hall outside the room.

The punch line: Don’t get distracted when driving.

After an uproar following the latter one — “How could you mock such a heart-wrenching moment?” — Poe filmed two alternate endings.

It only made his critics angrier. And that was just fine with Poe.

“I wanted to make fun of the people who take these things so seriously,” he said. “That’s what I get upset about.

“Corporate America is too P.C. because 5 percent of the population voices their complaints. I don’t care about those complaints because I know the 95 percent, the normal people, think it’s funny. You have to take your life less seriously.”

As the chief operating officer of a family business that started 29 years ago, he oversees 200 employees and $100 million in assets.

Growing the company in this competitive market isn’t easy.

So, Poe relies on his sense of humor in ads that anyone who drives through New Jersey knows from billboards.

But the company also runs plenty of television ads, including during the biggest television event of the year, the Super Bowl.

Cure has been running ads in the Super Bowl since the second New York Giants-New England Patriots game, in February 2012.

And, while other advertisers spend all year coming up with their pitches, Poe says he waits until two weeks out — when he finally knows the teams in the game.

“When the spots are germane to the actual teams that are playing, I think it resonates so much deeper than just a clever ad,” he said.

This year, they certainly were.

Poe and Cure Auto Insurance bought two 15-second regional ads. Some ran in the New York market, some ran in Philadelphia. And they played to the audience.

In Philly, whose hometown Eagles were in the game, he said, the vision was simple: Make fun of Tom Brady, the quarterback of the opposing team, the Patriots.

The ad said: “If you cheat on car insurance, you get arrested. If you cheat in football, you get to sleep with a supermodel.”

The mocking of Brady and his wife, Gisele Bundchen, was unmistakable.

And, amazingly, it almost didn’t happen.

The original said, “you get to play in the Super Bowl.” But that was nixed over the use of “Super Bowl,” which cannot be used due to NFL trademarks.

“They wanted us to say, ‘The Big Game,’” Poe said. “But that doesn’t work, that doesn’t resonate with anyone.”

Being able to adjust on the fly, Poe feels, makes his ads better.

“If we actually thought about it for months, it wouldn’t be that funny,” he said.

On three occasions, he said, his ads were rejected by the network.

Because of that, Poe said, Cure is required to turn in its copy 48 hours sooner than most other advertisers.

Not that he minds.

Poe said the Super Bowl is the ultimate payoff.

“It’s scary the increase,” he said. “If you look at our new business following the Super Bowl ad, it’s 50 percent higher for the six months following the game, then it starts dwindling. You can see an immediate spike. We get such an influx of calls, it’s amazing.

“I can tell you, if you do it right, the Super Bowl is the mecca of advertising.”

The cost, he said, is worth it.

Even if he wouldn’t give exact figures.

A national, 30-second spot for this year’s game reportedly went for more than $5 million. Cure’s ads were shown regionally — and were for just 15 seconds.

Poe who gets help from the creative team at Avenue Red and production assistance from Sarah Schatzinger, said it cost his company less than $50,000 to make the ads, far less than what national companies pay for their national spots.

And, he said, the return on investment is immediate.

Poe said he started getting texts and calls from friends as soon as the ad ended. And, while he knows business will continue to pick up, he said he got a true answer to the ad’s impact the day after the game.

“I got a call from a friend this morning,” he said. “She said, ‘I was just at the gym and these two women on the treadmill were talking about the Cure Auto commercial.’

“I said, ‘That’s the type of message you need to have.’

“If you don’t nail it, if you don’t get people talking about it the next day, you haven’t done your job. It’s a waste of your money.”

For Poe, good advertising isn’t about promoting the product as much as projecting a feeling. Humor, he said, is the best way to do that.

“Can you make something universally funny?” he said. “It’s hard to make somebody laugh in 15 seconds or have someone feel an emotion in 30 seconds.”

Even if, sometimes, that emotion is anger.