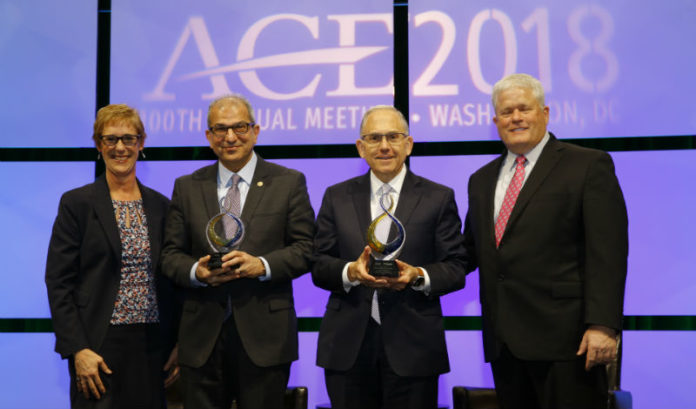 Stevens Institute of Technology and Saint Peter’s University were honored with national awards for institutional transformation by the American Council on Education at its annual meeting Sunday in Washington, D.C.

The award was created to recognize institutions that have responded to higher education challenges in innovative and creative ways and achieved dramatic changes in a relatively brief period. ACE invited nominations and applications for the award, under two categories, from any U.S. college or university eligible for ACE membership.

“Stevens Institute of Technology and Saint Peter’s University both illustrate how addressing issues head-on — plus a lot of hard work and collaboration — can help transform an institution,” ACE President Ted Mitchell said.

Stevens President Nariman Farvardin has led the transformation at Stevens since coming to the school in 2011.

“The demand for a Stevens education has never been higher,” Farvardin said. “With the continued commitment of the university community, the potential of Stevens is limitless.”

Stevens, located in Hoboken, is ranked 69th overall in U.S. News & World Report’s 2018 National Universities rankings, up from 71st in the previous year and 88th in 2011, making it the second-fastest-rising college in the nation among the Top 100 national universities.

Stevens was named as one of the top 25 “Most Innovative Schools” in the nation in the U.S. News & World Report Best Colleges 2018 rankings.

Saint Peter’s, located in Jersey City, is ranked No. 97 among regional universities in the North by U.S. News.