Home Politics How the 5th Dist. is getting big trucks (for free) from the...
Facebook
Twitter
Linkedin 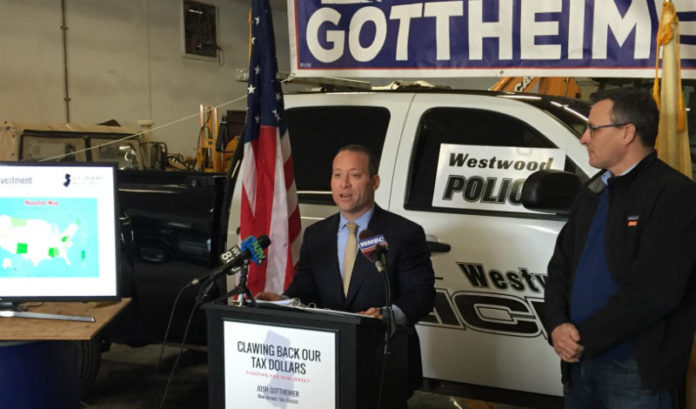 When the nor’easter blew through Bergen County last Wednesday night, the borough of Westwood was ready.

It quickly deployed its new bucket truck and was out trimming trees and taking down branches before they came down by nature, causing even more havoc in the storm.

And here’s the catch: Thanks to a program that allows towns to acquire used military equipment from the federal government, it came to Westwood for free.

In fact, since joining the 1033 program, a federal government surplus program brought to the town’s attention by Josh Gottheimer, the first-term U.S. representative from District 5, the town has picked up $775,000 worth of equipment at a cost of less than $5,000 for delivery and minor service.

Birkner said the town was planning on buying the truck, valued at more than $200,000, in the new budget. But, working with law enforcement, which oversees the program, Westwood officials were able to find a truck in top condition that they could acquire simply by applying for it.

“It was a life-saver,” Birkner said from a media event from the Westwood Public Works department building. “And with this storm, the timing couldn’t have been better.

“It was incredible; those guys were out the night of the storm all night long. We had a multitude of trees and limbs that had snapped and limbs that were hanging precariously. We were able to get up and get them right away before they could cause any more damage. That helped the utilities to be able to do their job.”

Gottheimer said the program is just one way he is fighting to help New Jersey get a better return on its investments.

Presently, the state gets only 33 cents’ aid for each dollar it sends to the federal government, one of the worst returns in the country.

Gottheimer said it’s time to turn that around to benefit residents, municipalities and businesses.

“I just believe any which way we can cut taxes and get tax relief for people is critical, given how expensive our state is to live and for businesses to operate,” he said.” I think it’s critical to find any way we can to get relief.

This program is just one way.

Gottheimer and Birkner were joined at the event by the mayors from Paramus, Hackensack and Fair Lawn, all of which have benefited from the program.

Doing so, Gottheimer said, is easy.

In fact, his office has hired a director of return on investment, Jake Briggs, to help in the process.

“(His) core responsibility is to find every single federal grant dollar that our communities qualify for and then to work closely with our mayors and departments who are applying for those grants,” Gottheimer said.

It’s simple, he said, once municipalities learn how the program works.

“I think a lot of towns just didn’t know about it,” he said. “We have somebody on staff who just works on it. We say, ‘Here’s the application overall for 1033, but here’s another grant coming up and here’s when it’s due.’

“(It) just takes resources, but there needs to be understanding that, if you do it, you can save a lot of money. I think once these towns start to do it and use that muscle, they are going to realize, ‘I can save a fortune for my taxpayers.’”

Acting Police Chief Matthew McClutchy said the town has been able to acquire a number of trucks (including a Chevy Silverado and a Ford F150) and cargo vans — vehicles he said no one would know are from the military.

“This equipment, that would otherwise be destroyed or auctioned, we get to utilize,” he said. “Critics of the program worry about the militarization of the police department, but based on my experience with the program, those concerns are not valid.”