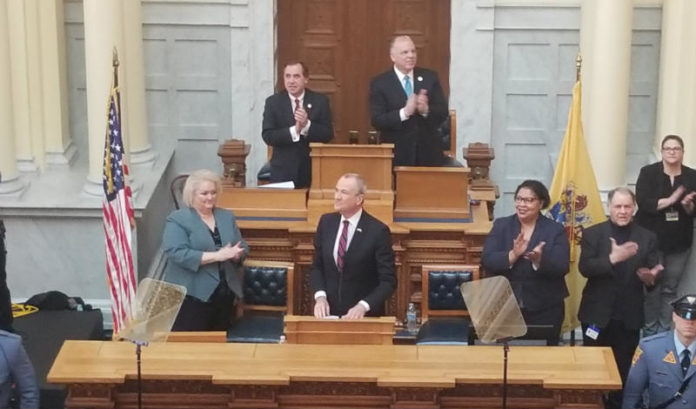 Gov. Phil Murphy presented his first budget, which includes appropriations totaling $37.4 billion and a projected surplus of $743 million, on Tuesday in Trenton.

“This is a budget that is balanced both fiscally and morally,” Murphy said. “Our constitution requires the former, but our conscience demands the latter.”

The budget appropriations represent an increase of $2 billion from last year.

Several budget topics look to have a direct effect on businesses around the state. They include:

Murphy announced a $242 million subsidy, a 172 percent increase, for New Jersey Transit, the largest-ever expansion in a single year.

The move would boost the total state subsidy to the transportation agency to near 2012 levels, when it received $285 million, according to NJ Transit financial filings.

Since 2012, former Gov. Chris Christie cut 90 percent of the agency’s subsidy and diverted $3.4 billion from the capital budget to pay for daily operations, according to Bloomberg.

Christie first gutted the agency in fiscal year 2013, when the subsidy was reduced from $285 million to $68 million.

After supporting U.S. Rep. Josh Gottheimer’s charitable donation workaround to the federal $10,000 cap on state and local tax deductions — used by at least 41 percent of New Jersey property taxpayers — Murphy announced Tuesday that the state will increase the cap to $15,000.

This will benefit more than 500,000 taxpayers across the state, Murphy said.

NorthJersey.com reported that New Jersey’s average SALT deduction in 2015 was $17,850.

Unsurprisingly, Murphy brought up his greatest campaign revenue idea: legalizing recreational marijuana and expanding medical marijuana. He anticipates the move will net the state an estimated $80 million in revenue for this year.

The initiative could raise $20 million in revenue through medical marijuana expansion and $60 million from legalized marijuana.

Amid criticism from the business industry about the series of new and additional tax proposals in the state, Murphy did not back down from his campaign promise to impose a millionaires tax. Establishing a millionaires tax will generate $765 million in additional gross income tax revenue in fiscal year 2019, according to Murphy.

Recently, the New Jersey Chamber of Commerce’s Tom Bracken said the anticipated revenue is nowhere near the numbers the chamber has looked at.

The loophole, which predominantly benefits private equity, hedge fund managers and real estate investors, allows them to pay a lower tax rate on investment profits. It is also a target for Murphy.

In his budget address, the governor anticipates $100 million in revenue generated from imposing increased taxes.

Despite the criticism and threats of leaving the state from businesses, especially from the manufacturing industry, Murphy’s budget plans for a four-year phase-in to the $15 minimum wage. This includes a jump to $11 per hour for fiscal year 2019. Murphy anticipates this will boost income of 1.2 million residents.

Murphy also announced his opioid spending plan — a sum that is half of what his predecessor committed last year.

In keeping with the administration’s goal to counter federal-level mandates and address federal-level issues at the state level, Murphy announced the creation of a new gun violence research center at a public university.

“This budget also provides $2 million to establish a new gun violence research center, to be based at one of our state universities,” Murphy said. “Congress has refused to fund such necessary research for over two decades. It is now up to the states to lead. This investment will start this long-overdue process. When we formed States for Gun Safety, I recognized the critical need for the data-driven research we need to enact better public policy. Working together with our partner states, we’re taking that approach.”

Though there was no major announcement tied to tax incentives, Murphy addressed his ongoing audit of the incentives the state has given.

“I am excited about the prospect of attracting Amazon to Newark,” Murphy said, giving a shout out to Mayor Ras Baraka, who was sitting in the crowd.

“We were told these tax breaks would nurse New Jersey back to health, and, yet, our economy still lags.

“Now, I have been clear that I do not oppose the concept of tax incentives on its face, but they must be distributed responsibly and as part of a broader package of incentives and investments that the state can make to better the climate for all businesses, not just a few favored actors. It needs to be done with precision and accountability, and in alignment with our future aims.

“This is one reason why I have directed the state comptroller to undertake a comprehensive audit of our tax incentive programs. We need to see what we’ve actually gotten in return for our $8 billion.”

Building blocks: New director of development talks about how her experience...