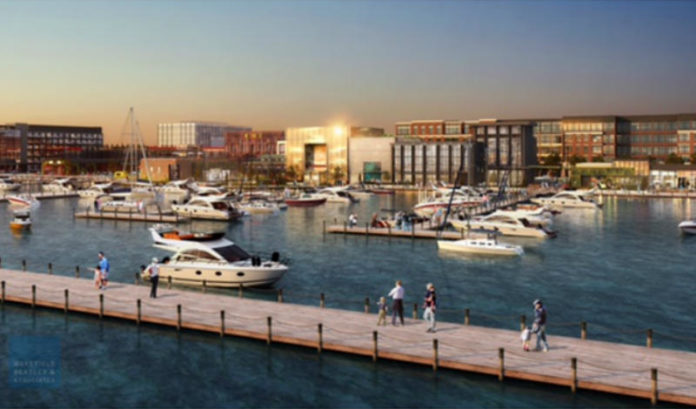 Riverton, the $2.5 billion, never-seen-in-New Jersey type of development coming to the banks of the Raritan River in Sayreville that was announced last November, is taking small steps toward its eventual completion.

So said Mark Toro, the managing partner of North American Properties, which is bringing a concept Toro calls “experiential mixed-use” to the state.

Toro and members of his team met with residents of Sayreville on Tuesday night to talk about the 418-acre project, which mixes retail, restaurants, office space, hotels, parks and a marina in a work-live-play community of the future.

“(In November), it was an idea — now, it’s a plan,” he said. “We have spent the last six months or so building a team out and creating a plan.”

Toro said the group hopes to make announcements regarding retail anchors this fall and put the first shovels in the ground next spring.

From there, he said, it should be a five-year build out.

There are plenty of financial and legislative steps in the process.

Toro said the project has received concept approval by the Sayreville Economic Redevelopment Authority, which is the agency that governs the site.

It will still require approvals from more local and county agencies — and North American Properties is awaiting word from the state Economic Development Association regarding an ERG incentive grant of $233 million that was approved for a previous iteration of the project, as well as a payment in lieu of taxes agreement from the town.

The ERG approval could come as soon as this summer.

“We are going to amend that (ERG) grant to match the scope of that project,” he said. “The project essentially has taken a concept that was ill-fated and now obsolete, a regional mall, and replaced it with an experiential mixed-use, which is what we perceive to be the future.”

Toro said the company is hopeful and confident it will get all of the necessary approvals. So much so, he said, that the project manager recently moved to New Jersey.

“A deal isn’t done until it’s done,” he said. “Until the ERG grant is in place, we don’t have a project. It’s a critical component.”

David Weinert, a partner and senior vice president of North American Properties, heads up the retail leasing component — and has been approaching national retailers for months.

No deals have been signed. Weinert, a well-known industry veteran, said deals usually take 12 to 18 months to complete.

And while the property seemingly will hurt the malls closest to it, Menlo Park Mall, Woodbridge Town Center and Freehold Raceway Mall, Weinert said that, because of the uniqueness of the project, the properties will not necessarily be competing for the same tenants.

“Nothing against Menlo Park, or Woodbridge or Freehold, but here’s what’s going on today: There’s about 150 cool expanding retailers that will never set foot in those malls,” he said. “That’s just not where they are going to go.

“That’s my unique point of differential merchandising opportunity. I don’t want to take away from the mall to develop Riverton, and that’s the beauty of the whole retail model. It’s not a zero-sum game. It isn’t about taking away or getting the mall to shut down, it’s just delivering what the consumers want.”

Weinert and Toro both said they are hearing from retailers who are looking to plant a flag in the New Jersey market.

Toro said he was eager to meet and talk with residents.

“This is what we do,” he said. “In every community that we enter, we get to know the residents. We talk about building communities. This is the first stop in the community-building process.”