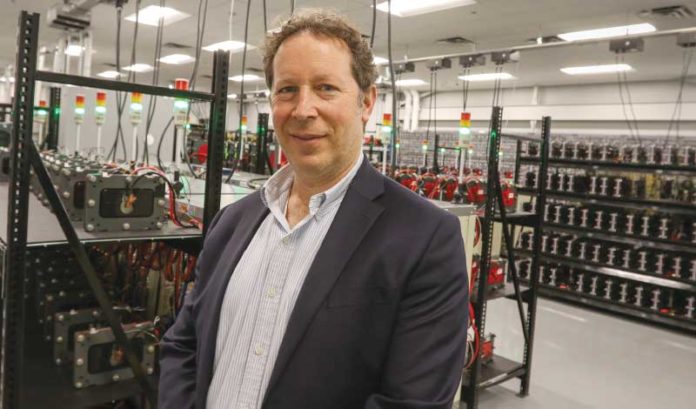 Michael Oster is CEO of a local energy storage company, which means he undoubtedly stands to benefit from the latest decree from federal energy regulators.

The Federal Energy Regulatory Commission, or FERC, passed a rule at the end of February that puts energy storage on an equal footing with existing power grid resources. It devises tariffs for operators of regional grids that will open new doors for energy storage systems.

But, in a twist that hints at just how flourishing a sector this is, no one has ever sounded so nonchalant about such gleaming prospects.

“It’s good that they’re allowing energy storage assets to be recognized in this way, but, even without it, there was a very fast-growing curve we’ve already been seeing in this sector,” Oster said.

Oster has felt the winds blowing in this direction from a long way off at Edison-based Eos Energy Storage, a decade-old company he co-founded. Even prior to the recent regulatory decision, his business was swept into an unprecedented growth period.

“To give you an idea: Leading up to that announcement, we received about $6 billion of qualified inquiries from six different continents,” he said. “At the same time, we received $40 billion of not-yet-qualified inquiries, meaning very large potential projects from developers and utilities that may not be proven or have the tariff structures in place — yet, they still make a lot of sense.”

For Oster, this signals that energy storage has a highly in-demand status not only in the United States, but across the globe. And its role was starting to be valued well before the regulators opened the floodgates.

And Oster’s take is no self-serving estimation of the industry’s outlook. Nathan Howe, as an environmental attorney who interacts with many different layers of the energy sector at Newark-based McCarter & English LLP, seconds his enthusiasm for energy storage.

“The greatest evidence that storage is already here in a big way is that FERC didn’t just recognize that it’s here — they rolled out a welcome mat for it,” he said. “This technology is at an inflection point right now. All the attention is on it.”

The technology itself only happens to share a category with pumped storage hydroelectric projects, which have existed for nearly a century and still encompass much of the country’s energy storage. What FERC was addressing in its rule-making has a much shorter history.

The new battery systems can be expanded the size of a car parking space and multiplied to a scale needed to operate on a regional power grid. Howe described it as a jack-of-all-trades in the energy market, capable of filling gaps in power generation in times of scarcity and serving as distribution when the grid would be otherwise strained.

It’s only being heard about now because of the technology’s price declining at breakneck speeds, even within the past year.

“It used to be a few years ago that solar was sort of expensive, and a just few months ago that batteries were expensive, so no one really talked about it that much,” Oster said. “Now, with solar often costing less than natural gas and other fuel sources and with batteries falling down in price very quickly, this is starting to cost so much less than other forms of power generation.”

There have been various innovations in the battery space, with lithium ion-based technologies being the most prominent on the market today. But Oster said Eos Energy Storage’s protected Znyth battery has proved to be the lowest cost of the energy storage systems already commercialized or near that point.

But the local company is up against some major corporations that have been making significant investments in this space, such as Tesla Inc. Dennis Toft, chair of Chiesa Shahinian & Giantomasi P.C.’s environmental law group, said that’s only one of the many private enterprises with a developing interest in energy storage.

“Tesla is the one everyone knows about, but there are lot of startups and entrepreneurial companies out there that are trying to improve this technology right now,” Toft said.

Eos Energy Storage’s niche is tailoring its batteries for stationary, utility-scale energy applications. This requires a battery that can withstand lots of use, keep running for many years and doesn’t cost a lot.

Although regulated utilities haven’t been inclined to be the first adopters of this technology, Oster expects them to represent a dominant market share for energy storage companies in years to come, especially after the recent FERC decision.

Courtney McCormick, a vice president in a renewables and energy solutions department at Public Service Electric & Gas, said the technology’s future is an ongoing conversation for the state’s largest utility.

“We’re spending a lot of time — folks across the organization — thinking about how energy storage will transform how the modern utility manages supply and demand on its network,” she said.

The utility has already gotten involved in energy storage with five pilot projects, four of which are now completed. The projects paired solar arrays with storage solutions for a variety of purposes, such as running a wastewater treatment plant in Caldwell or a high school in Hopewell.

“My team — I’ll give them the full credit because they’re a great group of engineers — have done tremendous work in developing these projects,” McCormick said. “But, now, we’re looking at the next phase of, how can we pioneer the use of energy storage on the distribution system?”

Modern energy storage systems enable utilities to store and distribute renewable energy from sources that drop off at certain periods, such as solar power at night or wind power without strong winds, which is why Doug O’Malley, director of the clean energy advocacy organization Environment New Jersey, is a proponent for its expanded use.

“Energy storage is like the forgotten stepchild of the clean energy movement,” he said. “But renewable technologies are going to need a robust energy storage component to hit the renewable energy mandates we’ve set.”

As O’Malley explained it, energy storage is not something you’ll live or die on if constantly-burning fossil fuels are the grid’s sole focus. But Gov. Phil Murphy has made bringing clean energy into the fold in the Garden State a focal point of his platform.

“That goal didn’t get a lot of attention — but it should,” O’Malley said. “And New Jersey has not invested a ton into energy storage as a whole, which needs to change. Murphy’s goals are the right place to start. Other states are out ahead of us on this, and we need to catch up.”

California, New York and Massachusetts have been cited as states leading in introducing energy storage.

New Jersey may start to evaluate its own increased participation in this as an offshoot of the committee-approved nuclear subsidy bill, which directs the state’s Board of Public Utilities to conduct an overarching analysis of energy storage.

“There’s a lot happening all at once in New Jersey,” Toft said. “People have to get comfortable with the possibility that the state will move forward quickly with energy storage projects.”

Although the details of a larger rollout of energy storage — and what it will mean for the state’s residents and business owners — remain to be seen, energy experts see New Jersey as an ideal location for these systems.

“We’re a densely packed urban and suburban region with congested transmission,” Howe said. “We’re not a great place to construct a lot of new energy capacity because of those dense population centers. And storage helps cut down on some need for capacity.”

Howe said one way to weigh the impact that more grid-linked energy storage could have in New Jersey is the resiliency aspect. Stored energy that can fuel the grid at any time could keep businesses running during what would otherwise be an outage, he said.

Energy storage systems are also recognized for their potential to alleviate some of service hiccups that occur during natural disasters. There are several projects already underway to install energy storage-equipped microgrids connected to hospitals and other critical facilities.

Allen O’Neil, another McCarter & English attorney with an energy expertise, added that another upshot of additional local energy storage — and, perhaps most convincing for businesses concerned that a utility overhaul means higher rates — is that it could represent cost savings, at least in the long-term.

“It may take time to get there, but you can look at solar projects and the way they went from being cost-prohibitive to very economically competitive today,” he said. “Just consider regulators and how they’re looking at this — they don’t want to endorse something that’s going to increase costs for everyone. They’re looking down the road and expecting this will result in cost savings. Like many, they believe energy storage is the way forward.”

A nondescript, 60,000-square-foot building in Edison may hold the distinction for being the largest test floor for battery technology in the world.

Michael Oster of Eos Energy Storage said the facility’s capacity, which he claims outstrips any testing center that he’s heard of in the industry, is essential for prototyping, assembling and testing of the company’s technology.

The time it takes to fully design and test energy storage systems is significant. Early adopters may need at least a year of information gathered through tests, while others may require five or more years of testing.

“Even though our systems are inherently safer than most, we don’t fault utilities for wanting to be careful,” Oster said. “We’re excited to work with the ones that are moving on it now.”

Reach Doug O’Malley of Environment New Jersey at: domalley@environmentnewjersey.org or 609-392-5151.