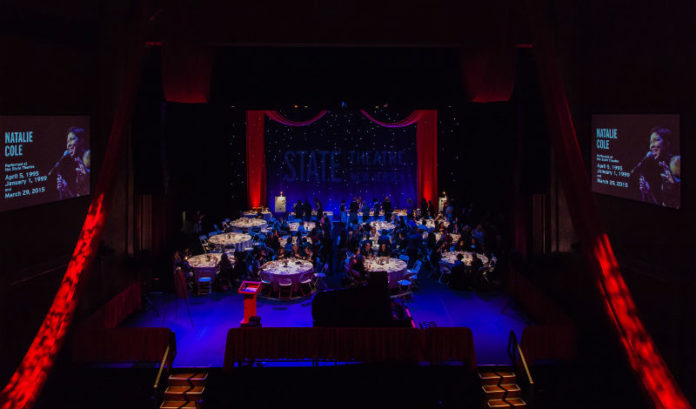 The second annual Women’s Tea at the State Theatre New Jersey in New Brunswick on Wednesday not only raised funds for the theater’s Arts Access initiative but also celebrated the incredible legacy of female artists who have appeared on its stage over the nearly 100 years it has been open.

“These women have been leaders in driving the change in their communities and, like all of you, their impact is broader than their titles as performing artists,” Linda Van Derveer, director of major gifts and planned giving at State Theatre New Jersey, said.

More than 100 New Jersey businesswomen — and a few businessmen — attended the event designed to benefit the community via Arts Access, which last year provided more than $730,000 worth of free and subsidized tickets and educational opportunities to more than 60,000 children, families, veterans and seniors.

Glenis Redmond, State Theatre New Jersey’s artist-in-residence, poet and educator, performed a spoken-word piece about Harriet Tubman and spoke about the importance of inclusivity in the arts.

“I take the same passion that my foremothers had, and I use it in the community to help young people gain their voices and tell their stories,” she said. “There is an aspect of social justice to the work that we do. Diversity is making sure that everyone is at the party; inclusion is making sure everyone is asked to dance.

“That is why we are always wanting to talk to business partners and sponsors to expand this work.”

Monica Yunus and Camille Zamora, co-founders and co-executive directors of Sing for Hope — a nonprofit that has helped place more than 400 free pianos, each one designed by a different visual artist, in New York City schools and in communities — also performed as world-renowned guest sopranos.

“Sometimes, the arts tend to fall into that ‘feel good’ mentality, but are not thought to have much of an impact,” Yunus, who grew up in Ewing, said. “They absolutely do.”

“It is about reframing the value proposition of the arts,” Zamora said. “This event, packed full of incredible influencers in this region, is an example of how there really is no ‘arts crisis.’ We are here together to talk about how we can leverage the power of this shared and treasured theater and the creativity that goes on here. It’s a very special thing to be able to have direct access to people’s hearts — that can move all kinds of business goals and key performance indicators.”

Sponsored by major companies such as KPMG and PNC Bank, as well as organizations such as Leading Women Entrepreneurs, the event was a resounding success, May Van Norman, senior director of development, said.

“We are just so happy to be celebrating Women’s History month with all of you today, as well as the importance of the performing arts in our world,” she added.