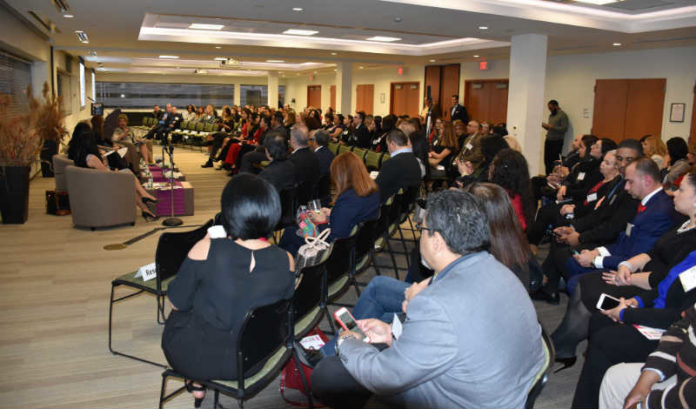 Diversity and cultural intelligence are keys to success in a global economy.

Nowhere is that clearer than in the number of growing small businesses — of which Latinas are the fastest-growing segment — and the increasing push to have diverse boards and leadership teams.

The Statewide Hispanic Chamber of Commerce highlighted some if its successful businesswomen at its annual event this week: The Art of Being a Modern Latina.

Some of the anticipated struggles — overcoming stereotypes, discrimination because of their accents, and balancing their cultural values — have, in fact, been key character-building experiences rather than deterrents.

Patricia Campos-Medina, a well-known political and labor leader in New Jersey, moderated the panel, held at Bergen Community College in Lyndhurst. She asked the women to tell the crowd of more than 100 men and women if their ethnic heritage ever got in the way of their work.

Smith said she found that, sometimes, her otherness helped her climb in corporate America — at Coca-Cola and General Motors.

Gil-Valleta said she was disheartened by the question.

“It makes me sad if anyone is thinking that being Latina holds you back,” she said. “It’s not an endearing term, it’s not meant to be cute or diminishing, it’s empowering. Until we start believing that, we are going to stay our corner of whatever story we are telling ourselves as a community. And, yes, the numbers need to be elevated. However, as Gail just said, there’s a cultural advantage for anyone that has a bi-cultural, bilingual upbringing. We have one of our sponsors (Goya Foods), a company that is the fastest-growing food company today because they owned their Latino-ness.”

And, too often, the non-capitalistic cultures lose out on opportunities to monetize on things that are considered everyday and foreign in the U.S. landscape.

Caribbean, Latin American and South Asian countries, among others, have long known and appreciated the value of coconut water.

But none thought to market it.

“It still makes me sad when I think about Mike Kirban — does anyone know who that is? That’s the guy who ‘discovered’ coconut water. We all grew up with that,” Gil-Valleta said. “But it turned upside down a $3 billion category in the beverage industry because we didn’t realize this cultural thing we grew up with could turn into Vita Coco.”

On the flip side, being Latina does come with all the pitfalls women in the workplace often face. That includes thinking twice about applying to jobs that they aren’t wholly qualified for and hesitating to speak up at meetings.

On the former, Campos-Medina asked the women how they overcome the imposter syndrome in the workplace.

Cortes said she knows the feeling all too well.

“I have suffered from that. I was always the first Latina in any department I worked in. And I was actually the first Latina in the newsroom when I walked in, in 1996,” Cortes said. “Part of me (questioned) why are they looking at me, did I wear too much lipstick. Then I (thought), no, I belong here. I know what I’m talking about, I belong here. So, I had to talk to myself and shut up that little voice in your head.”

Cortes was also recently elected to the North Brunswick Township school board.

Gil-Valleta said not following the “fake it ’til you make it” strategy is key.

From Bon Jovi to Doby: Parkway to rename 9 service areas after N.J. Hall of Famers

Setting the tone: Commercial industry was able to work through pandemic, but faced its own distinctive challenges

On location: A look at some of the films that have been made in Jersey in recent years … and some that are still...

Politics
ROI-NJ Staff -
August 4, 2021
In an unusual show of anger, Gov. Phil Murphy lashed out at anti-vaccine protestors during an event Wednesday in Union City. “These folks back there...

Food & Hospitality
ROI-NJ Staff -
August 4, 2021
German Doner Kebab, a global fast-casual restaurant chain that says it is revolutionizing the kebab, will open its first restaurant in the United States...

Retail
ROI-NJ Staff -
August 4, 2021
In a move that could have great impact in New Jersey, CVS Health announced Wednesday that all of its employees nationwide will make at least...

Food & Hospitality
ROI-NJ Staff -
August 4, 2021
Geoponica Greens, an indoor hydroponics vertical farm business based in Chesilhurst, is expanding its existing operations to the historic Mill One warehouse in Hamilton...