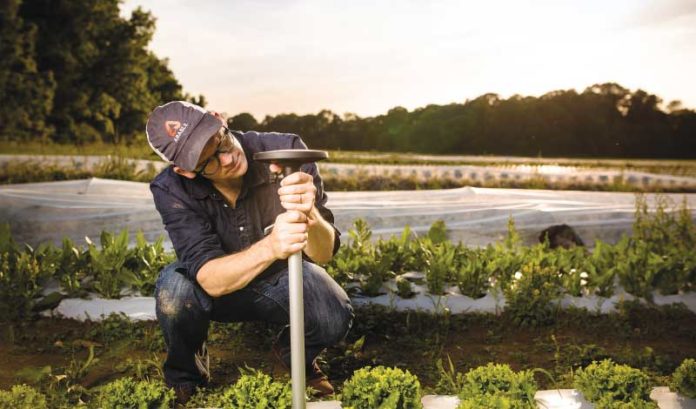 There are nearly 9,000 farms in the Garden State.

Adam Wolf said he wants to be able to help all of them flourish.

“So much of agriculture is driven by chance events, such as weather conditions and human or machinery failure,” Wolf said. “Arming farmers with meaningful data leads to them spending less time trekking through their fields and helps reduce crop loss and financial risk.”

Wolf, founder and CEO of Arable Labs in Princeton, developed the smart technology with which to help capture that data.

The Arable Mark IoT can be installed in the ground within seconds to provide real-time and predictive analytics of more than 40 metrics, including precipitation, temperature, solar radiation, plant health and ripeness to help farmers make more informed decisions via cloud-based software.

All Wolf needed to expand the technology, he said, was working capital.

“The overhead for a small business like ours is substantial,” he said. “Working with the New Jersey Economic Development Authority really helped us stay lean.”

Arable Labs was one of 39 companies to be approved for the state’s Technology Business Tax Certificate Transfer Program in 2017. Administered by the NJEDA and the New Jersey Department of Treasury’s Division of Taxation, the program enables eligible technology companies to sell New Jersey tax losses and research and development tax credits to raise funds to finance their growth and operations.

“The program was created through legislation to monetize the limited assets that a technology or biotechnology company has,” Kathleen Coviello, vice president of technology and life sciences investments at the NJEDA, said. “Many of these young companies need working capital today rather than once they grow to become income-positive.”

The assistance Arable Labs received from the NJEDA was instrumental in making that goal a reality, Wolf said.

“Since 90 percent of our expenditures are in research and development, we were able to collectively take all of that and get somewhere on the order of $250,000 cash back to continue to expand,” he added.

Not bad for a company in a field Wolf said he once nearly stopped believing in.

Just after completing his bachelor’s degree in agricultural science and his master’s degree in agronomy at the University of California-Davis, Wolf said the major was discontinued in 2001.

“It was crazy to think that the world might not need agronomists anymore,” he said. “It felt like there really wasn’t a place for me and, yet, I loved what I was doing.”

After signing up for a lot of manual work in the fields, Wolf said, despite the odds, he ultimately would continue pursuing his scientific studies.

He earned his doctoral degree in biology from Stanford University in 2010 by studying the fusion of models and data.

“We have so many models of how the world works, but so little data to back them up,” Wolf said. “For example, if you drive from New Jersey to Washington, D.C., using a paper map, it will give you a guideline of how long it will take. But it is missing a lot of the story: road conditions, traffic, detours, time of day, etc. Now, with the ‘Internet of Things,’ it is routine for all of us to use Google Maps to help plan our day.

“We can now combine how we think the world works with some data and real-time monitoring of what actually is happening to improve our models and predictions to better enable anticipatory action.”

Applied to agriculture, Wolf said, that means it no longer is OK for famine to exist in some parts of the world, or for natural disasters such as droughts or floods to create food insecurities, without being able to anticipate and plan a response in advance.

“I recognized that, for me to achieve the impact and change that I wanted to see in the world, I had to start a company to do this myself,” he said.

His journey led him to become an associate research scholar at Princeton University, under the guidance of professor Steve Pacala.

“That is where we developed the earliest prototypes that led to Arable Mark IoT,” Wolf said. “By 2014, we could pinpoint harvest dates up to six weeks out — meaning farmers could know their labor needs in advance.”

“The oldest generation is retiring and there are very few people coming into the industry as trained agricultural professionals,” he said. “There is a real need for productivity tools and eyes in the field to help prioritize and provide decision support for people who are managing more acres than ever before in history.”

The need for such technology led to initial funding from the National Science Foundation, which, in turn, led to exposure in the commercial space, Wolf said.

“We developed a proof of concept study with Driscoll’s strawberries, for example, which led to even more interest from investors and continued funding from the NSF to expand,” he added.

Then, Chris Vignone, CEO of PM Business Advisors — a New York-based business consultancy with offices in Basking Ridge — got involved.

“He really took on all of the risk and prepared the paperwork, only to be rewarded much later,” Wolf said. “Without Chris and his business, we never would have been able to take advantage of the program with the NJEDA.”

Coviello said the NJEDA had been speaking with Arable Labs since shortly after its inception in 2014.

“We had been letting them know about our business incubator and small business resources,” she said. “There had been a lot of touchpoints before they came into the Tax Certificate Transfer Program.”

To be eligible for the program, technology or biotechnology companies in New Jersey with fewer than 225 employees must not have had positive net operating income on either of their last two full-year income statements.

“When I meet with companies and I ask them if they are making money, and they sheepishly say no, I tell them this is one of the few times that they can lose money and have it be a good thing,” Coviello said.

Collectively, the approved applicants shared more than $46 million through the program in 2017 by selling a percentage of their net operating losses and research and development tax credits to unrelated profitable corporations.

“It wasn’t an investment — we didn’t sell stock in the company — so it was just money back in the bank,” Wolf said.

The program allowed Arable Labs to scale up in a big way last year, Wolf added.

The company now employs 22, with half of its workforce in New Jersey and half in California.

While the hardware and software costs just $1,000, Wolf said the technology is not only ideal for small farms but also for big-name brands that depend on crops for the reliable production of their products.

“While farmers generally are looking for better decision support concerning irrigation, plant nutrition, crop protection and more, the brands that you see walking down the grocery store aisle — many of which are based here in New Jersey — use agricultural products to make the food that we eat,” he said. “They, too, are interested in the yield and the quality of the crops when they are ready.”

“I think, how can I help enable the world that I want to live in and that I want my family to live in?” Wolf said. “I want to see people making decisions that lead to real reductions in food waste and an increase in agricultural efficiency and productivity. I’d like to see consumers be able to get the food that they want that is epically produced and sustainably grown. And I’d love for that food to be more delicious, flavorful and diverse.”

Wolf said New Jersey is the best place to help make his dream a reality.

“As far as a place with intellectual ferment, great employees and business and investor networks, the state is simply unmatched,” Wolf said. “I am just so grateful that life brought me here and that I get to stay and grow my business here.”

“Arable Labs, for example, was able to access cash, which often is difficult for young companies,” she said. “This was a great way to do so without giving up ownership in the company.”

Coviello said Arable Labs’ story is just one of the many examples of why she encourages all such companies to speak with the NJEDA upon forming.

“When we meet with companies, we try and make sure that they are aware of our whole suite of offerings,” she said. “We encourage folks to talk with us early.”