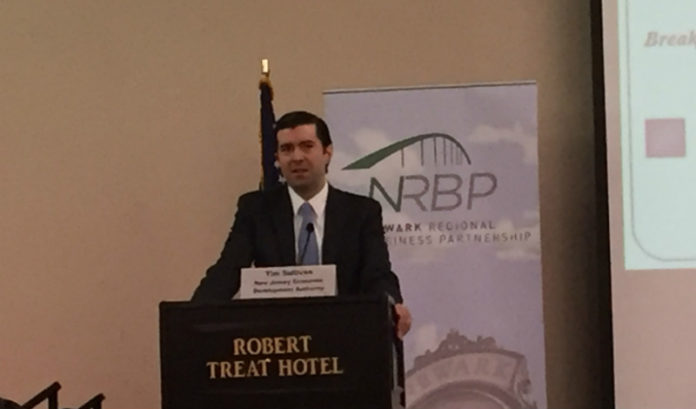 Amazon had every economic development organization in the country scrambling last fall, when it put out a request for proposals seeking a location for a second headquarters.

Tim Sullivan, the new head of the New Jersey Economic Development Authority, said the billion-dollar e-commerce giant did them a favor in the process: Amazon showed everyone how important cities are to the future of economic development.

Sullivan, speaking at a Newark Regional Business Partnership event Monday morning, stressed how New Jersey needs to be ready for this next wave of development.

“(For) those of you who have been making the point about economic development being organized around cities, they made it really easy when they put out an RFP that said basically, ‘We want a big, thriving city — that’s where we want to be.’

“This is one of the largest and most successful companies in the world, and that’s what they want.”

All of these things, he said, can happen in urban areas.

“We need to be thinking about continuing to focus and strengthen our cities,” he said. “We’re increasingly seeing it — and you don’t have to take my word for it — companies and talent want to be in cities.

“We saw that proof positive with Amazon.”

Newark is one of 20 national finalists to land Amazon’s HQ2. But whether it does or not, Sullivan said, the state must be ready for the next Amazon. And companies of all sizes, not just the giants.

“If our cities aren’t well-positioned to respond to those opportunities, we will miss them,” he said. “And that will be a shame, because that’s 20, 50, 100 years of the next iteration of that kind of development (that) is going to be organized around those kind of decisions and those kind of investments.

“So, we have to position ourselves, make the smart bets to capitalize on that.”

Sullivan, who noted he has been on the job for four weeks and one day, said he’s telling this story to business development professionals across the state.

It’s his way, he said, of showing that the EDA wants to be a partner in these efforts.

From county and municipal governments, to labor, to anyone involved in real estate, and others, Sullivan said the EDA is eager to help.

“It takes a team effort to bring the kind of visionary projects to life that you all want to see happen,” he said. “That means sometimes the EDA and the state will be in a backup role, singing harmony, and sometimes we’ll be a little further out front.”

Sullivan also said the EDA will not dictate all the moves of the state.

“We don’t have a monopoly on good ideas, we’re eager to hear good ideas,” he said. “There are great opportunities, but we will only capture them together.”

Sullivan, a New Jersey native who worked in economic development in both New York City and Connecticut, said he’s seen this work before.

And that collaboration is the only way areas can succeed.

“Companies, tenants, decision makers, investors want to see collaboration and partnerships at all levels,” he said.