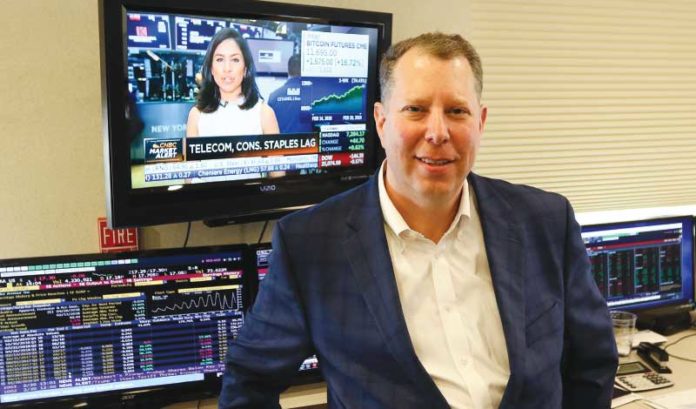 When he was younger, he always was captivated by the businessmen on the mountain.

“These guys always had the money and the time to ski in some of the best places in the world,” Ken Schapiro said. “I wanted to be one of those people who went up several times a year — that was my goal and objective and a passion that I caught onto which changed my life.

“It is actually what caused me to go into business for myself, because it’s not like I could get a job at IBM and still go heli-skiing for several weeks out of the year.”

Schapiro, founder and president of Condor Capital Wealth Management in Martinsville — an independent registered investment advisory firm that currently manages $1 billion in assets — has skied some 9 million vertical feet of slopes only accessible by helicopter, a feat he said has been accomplished by fewer than 100 skiers.

Heli-skiing is more than just an adrenaline rush.

“I am lucky to have pursued this passion,” Schapiro said. “But it was not my only one.

“I also believe very much in transparency, which is how I’ve grown successful. That is how and why we started this business — to tell people what their (investment) performance was when no one else was.”

In creating not only the fee-based, employee-owned investment advisory firm, but also The Robo Report, the first and only report on the performance and portfolios of robo advisers, Schapiro has quickly become one of the most disruptive players in the financial services industry.

Schapiro said he, his brother and his sister grew up working before and after school at their father’s private medical practice in Flemington.

“There would be ongoing business at the house from 8 a.m. to 10 p.m., with people then showing up during off-hours with all sorts of medical emergencies,” he said. “That is a different way to grow up than most.”

However, per his father’s instruction, Schapiro invested his $50,000 worth of earnings in stocks so that, by the time he graduated from the University of Colorado with a Bachelor of Science in finance and an MBA in marketing, he had $150,000.

Some of which, Schapiro said, he spent on learning how to heli-ski.

“My brother had gone twice before and said it was the best thing,” he said. “So, I went with him when I turned 21.”

“It changed my life, especially because I would meet all these luminaries in business early in the season, when it was much less expensive,” he said.

Their lifestyles and levels of wealth gave Schapiro the confidence to start Condor Capital Wealth Management in 1988 at the early age of 23.

“My father’s friend Alf, then a large producer in the life insurance business, encouraged me to visit his friends in financial planning and wealth management to survey their businesses and understand what it was they were doing for people,” Schapiro said. “And, roughly 30 years ago, this business was much different. It was filled with high-commission brokers and a lack of transparency.

“So, when I returned, I said: ‘Alf, what everybody is doing is not what we want to do. I think that the wave of the future is fee-only financial planning; when you charge a fee, you have no incentive to buy, trade or sell unless it is in the client’s best interest. So, we are going to charge low fees and report our performance to people.’”

Their fees, Schapiro said, would be based on the size of a client’s portfolio rather than on commissions or a certain number of trades, to avoid conflict of interest regarding investment decisions.

It was a sound strategy at a time when discount brokerage firms and independent registered investment advisory firms were just beginning to gain significant market share.

“I also told Alf that I wanted to own our own dirt,” Schapiro said.

Schapiro and his partner had been working in North Plainfield, where Alf had run his own insurance business. That is when Alf’s wife found the perfect building for company headquarters: the former Martinsville School.

“It was abandoned, it was for sale — it was a good deal,” Schapiro said.

Condor Capital Wealth Management relocated to Martinsville in 1996, shortly before Schapiro bought out Alf as part of a planned growth strategy.

“We are now way more efficient and lower-cost than most firms,” Schapiro said. “When we are benchmarked against the industry for how many advisers we have per client, for example, we are the outliers. But we have a tremendously diverse clientele and employee base.”

While Schapiro typically works with $1 million-plus clients, he said, Condor Capital’s minimum is $250,000.

“Clients are generally older at most wealth management firms, but ours skew a bit younger than most,” Schapiro said. “And, while most of our clients are from central New Jersey, about one-third also come from all over the United States, from places such as Florida, California, Colorado and more.”

“We are known for having a tremendous millennial staff here,” Schapiro said. “Most investment management firms do not look like Google. But we buy food for our employees from the time that they show up to the time that they leave, and we also invite everyone to participate in the employee stock ownership plan to contribute to and be invested in the growth of the firm.”

This has allowed Schapiro to hire and train many of his 20 employees from the ground up.

“Young people today want to be challenged and they want to be rewarded,” he said. “Many companies don’t reward their employees with ownership, but I liked that it aligned everyone’s interests.”

For Schapiro, the best interests of his employees — and his clients — are always at the top of mind.

In addition to managing Condor Capital, Schapiro was responsible for creating BackEnd Benchmarking — and The Robo Report — last year.

“Robo advisers started becoming popular around three years ago, and it became very apparent to me that this interesting technology would be successful,” Schapiro said. “However, while they filled a need in the marketplace, they really were not transparent. People would invest their money without knowing who was performing better or worse.”

So, Schapiro began opening and funding accounts with various robo advisers to gain insight into how the automated investment products performed and reacted under changing financial markets.

“Then we started publishing our findings — something no one had ever done before,” Schapiro said. “Needless to say, we became a very unpopular disrupter in the industry. The Vanguard Group, for example, tried to shut us down by sending us legal letters and closing our accounts. But, we had backup accounts. And we told them how that didn’t look good on them.”

In a continued effort to help investors, fellow advisers and the public make more educated financial decisions, Schapiro said he does not intend to stop there.

“The goal, really, is to backend benchmark any financial product in order to bring transparency to the whole investment community,” he said. “We intend to gain some funding and take this business plan to the next level soon.”

“If I am successful, I will not be a well-liked person in the financial services industry,” he said. “Consumers, however, will love me.”

Heli-skiing has given Ken Schapiro, founder and president of Condor Capital Wealth Management in Martinsville, the opportunity to travel to remote mountains that have never been skied, he said.

“The sport has taken me to great places, where I have met amazing people and have had tremendous experiences,” he added.

But what, exactly, is it?

“When I talk about heli-skiing, people think I get dropped out of a helicopter like I’m James Bond,” Schapiro said. “The truth is, it’s like a lift — the helicopter lands, I get out in my ski boots, and I put my skis and gear on.

“Does the helicopter land in precarious places? Sure. Does it hover? Sometimes. And, depending on where you go, the mountains can be extremely steep. But I am 52 years old, and there is now a limit on what I am going to do. I am no longer interested in skiing off cliffs higher than 3 to 5 feet, that’s for sure. I’m not going to ski off something that is 20 feet high unless I absolutely have to.”

Schapiro said while his most frequented heli-skiing spot is in a tree-lined area of the Monashee Mountains in British Columbia, he is excited to travel this year to the Thompson Pass in Alaska, a 2,805-foot-high gap in the Chugach Mountains.

“That place is like the mecca of steep skiing,” he said.

About Out of Office

Out of Office is a regular feature in ROI-NJ. Do you know a top business leader with an unusual story that needs to be told? Email Tom Bergeron at tbergeron@roi.wxp.io.