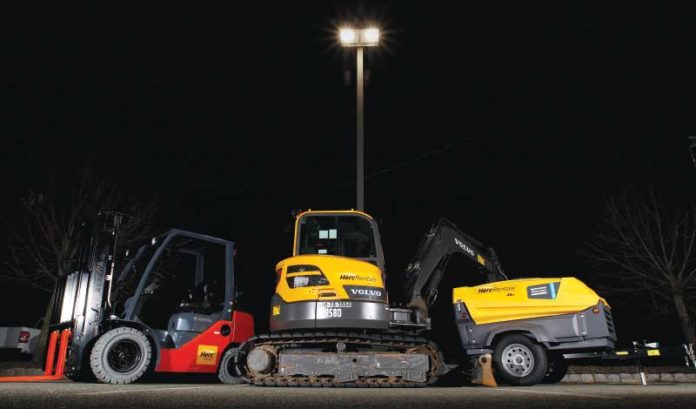 Sergio Sousa’s rise through the ranks at Herc Rentals is no different from that of many people at many companies.

He started 20 years ago in the most entry-level of positions, a yard worker, essentially serving as a gofer. Slowly but surely, he worked his way up through the ranks, progressing from every level of mechanic to a road technician, to a service manager, to his current position, a branch manager in Newark, where he oversees the company’s aerial division.

His rise, however, differs from those at other companies for one reason: He has moved from the ranks of the union to a non-union management position without issue or concern — and with the backing of Herc Rentals management.

Rob Cowing, Northeast region vice president, said the company is proud of its relationship with its union workers.

“It’s very unique,” he said. “The drivers, mechanics and yard workers are all union, and we support that. And we’re not afraid or concerned about promoting union members into management.

“A lot of people I talked to say, ‘We’d never do that, because it’s going to affect management with this union sense of rules.’ It’s the opposite here.’”

Sousa would be the first to agree.

He said the camaraderie among the staff is a key reason they work together so well.

“We’re a family,” he said. “We spend more time with each other than our own families, so we need to get along.”

Sousa, in fact, said moving into a nonunion management job only strengthens the bond between employees, as it allows both groups to get a better understanding of their roles.

“Me, coming in as a union guy, I always assumed those guys didn’t do anything,” he joked. “But as soon as I stepped in their shoes, I said, ‘Oh, now I see what I didn’t see as a union guy.’”

Things were not always this way at Herc Rentals.

In fact, when CEO Larry Silber was brought in during the summer of 2015 to lead the company’s spinoff from Hertz into its own public company, he was stunned at the morale among employees.

Silber quickly changed that. Numerous employees at Herc Rental locations around the state gave him credit for not only treating everyone equally — union or nonunion — but by increasing the give-and-take between all levels of the company.

Simply put, they said, Silber and Chief Operating Officer Bruce Dressel listen to what the employees have to say and often give them the go-ahead to implement changes.

“Everybody has the feeling that they care,” Sousa said. “Not just about our equipment, but about our thoughts and ideas.”

Sousa, in fact, is in his second tour as a branch manager. He previously served in the role under the Hertz regime, but moved to a different position when he saw how the job was viewed.

“When I did my first stint, it’s not that they were bad people, but some of the stuff they were asking us to do had nothing to do with the business,” Sousa said.

Silber and Dressel are different, he said.

“They came from our business, so they understand it,” he said. “It’s like being able to speak English again.”

Silber said it’s all part of a business plan that has helped him quickly turn around the company.

You get a group that’s solely focused on the company, no matter what their status is, Cowing said.

“If you ask anybody at any level in the company who they work for, they’re going to say, ‘Herc Rentals,’” he said.