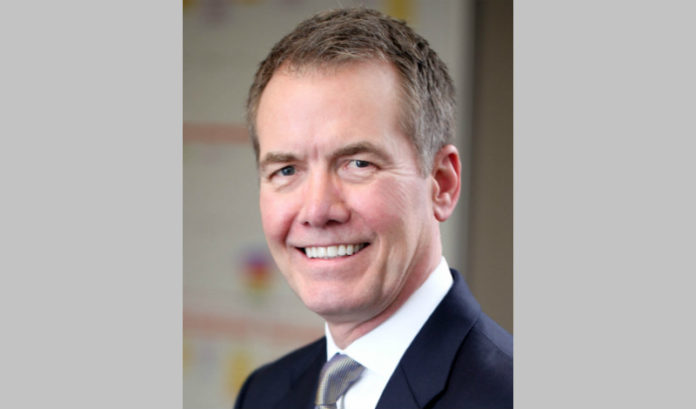 Carteret Mayor Dan Reiman remembers driving around with Todd Anderson earlier this month, just a day before the ribbon-cutting of the latest Hampshire Cos. project in his town.

It was an Extra Space Storage Center. And, as they drove past the location, Reiman noted how you could see through the fence on one side of the property, revealing a not-so-pretty side of the neighboring business.

“The next day, he had his guys out there putting in additional fencing before the ribbon-cutting,” Reiman said. “It beautified the site. It made the property look better and cleaner, and that what was important to him.

“There wasn’t a detail too small that he wouldn’t get engaged in. This was last-minute, the day before the ribbon-cutting. He didn’t have to do anything, and there he was, making sure to put in additional fencing that he didn’t have to do.”

The married father of one will be a huge loss to Hampshire and the real estate business community, CEO and President Jimmy Hanson said.

“I, like every member of the Hampshire team, am shocked to learn of Todd’s sudden passing, as he was more than a partner or a colleague, but a member of our Hampshire family and a dear friend,” Hanson said.

“Although Todd’s 12 years at Hampshire were far too short, I will always remember the thought-provoking, energizing and stimulating daily conversations we enjoyed and the vision and creative ingenuity that Todd brought to work each day.  My deepest thoughts are with his family at this time.”

“He was a spectacular leader,” Reiman said. “I’ve had the pleasure to know and work with Todd for the past 10 years.

“When you shook his hand and made an agreement, you know you had an agreement — and you know it was an agreement that always was with the best interests of the community first.”

Reiman and Anderson shook hands many times over the past decade, starting with a deal involving P.C. Richard & Sons. It was then that Reiman realized how special Anderson was.

“Hampshire had acquired the old Wiz warehouse and they wanted to put a P.C. Richard’s up,” he recalled. “I said, ‘That’s great, but I would like a retail component, not just a warehouse distribution center.’

“Todd coordinated the discussion and, ultimately, it became not only a distribution center, but a retail outlet, a trainer center and their New Jersey corporate headquarters. That was all because of Todd’s efforts.”

It was the start of a relationship that enabled Hampshire to reposition or develop nine projects with an aggregate 2.25 million square feet and value in excess of $350 million within the municipality, bringing jobs and a wide range of successful companies to Carteret.

And each one came with Anderson’s touch, Reiman said.

“There have been developers who come in that you meet once and then they go on to different projects,” Reiman said. “Todd had this unique ability to connect. He was a genuine gentleman with a character you can trust.

“He always did the right thing and always talked about all of the details of the project, whether the scope, the design, the setback, the architecture — even whether local residents were being put to work through the local trade program, or helping to coordinate the job fairs for the tenants.

“He was always willing to reach out and go above and beyond to make sure the town, the administration and the residents were happy. There was nothing that was too small or too large for him to take care of.”

That extra service helped Carteret in many ways.

“Todd’s vision helped set the industrial market for West Carteret and the price point that they are now getting on some of these warehouse and logistic centers,” Reiman said. “There are two other projects under construction in the western portion of our industrial zone.

“Just last Friday, we chatted about the next phase, which will be an additional 600,000 square feet of projects that he’s been working on for years.”

“Since joining Hampshire in 2005, Todd was an integral member of the Hampshire senior leadership team, where his passion, hard work and creativity embodied the Hampshire Cos.’ motto of ‘Real Estate through a Different Lens,’” Hanson said.

“Behind Todd’s creative approach to real estate investment and vision, the firm was able to execute over 125 repositioning and transformational real estate projects with an aggregate value over $2 billion throughout the United States.”

Under Anderson’s leadership and vision, Hanson said, such transformational office repositioning projects included 8 Sylvan Way in Parsippany, Centra in Woodbridge and 175 Park Ave. in Madison. They allow thousands of employees of leading companies to work each day in 21st century transformative workplaces.

During his time at Hampshire, Anderson helped two major companies secure new headquarters in New Jersey, bringing The Medicines Co. to 8 Sylvan Way in 2008 and bringing Realogy to 175 Park Ave. in 2012.

Both deals were recognized by NAIOP New Jersey with its prestigious Deal of the Year Award.

Jon Hanson, chairman of The Hampshire Cos., said Anderson will be missed and remembered.

“I am honored to have called Todd a partner and colleague, but, most of all, a friend,” he said. “In his time at Hampshire, Todd’s vision, passion and creativity made him a valued member of our team and someone I came to rely upon for counsel and advice. My sincere condolences go out to Todd’s family during this difficult time.”

Prior to joining Hampshire, Anderson was a member of CBRE Global Investors’ Strategic Partners group, where he was involved in all asset management activities on the East Coast and Southeast.

Anderson, a graduate of the University of North Dakota, is survived by his wife, Dorota, and son, Jackson.

Leasing begins at Crossings at Raritan Station, next to borough’s train...