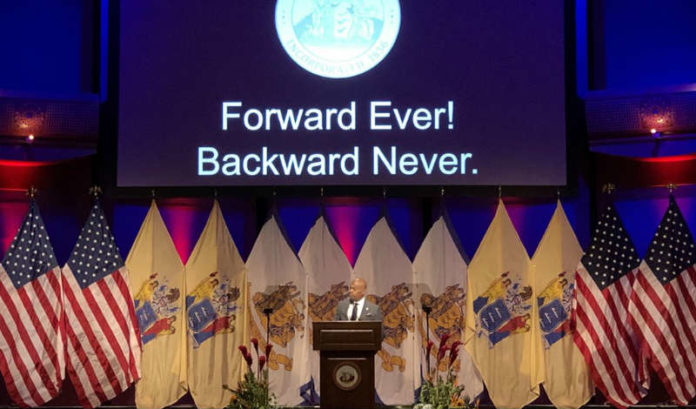 It will be his last before he runs for re-election.

But, based on his record of achievements — and the reactions from the more than 1,000 dignitaries, politicians, business leaders and residents who came to listen — it’s hard to imagine Baraka will not be in line to deliver four more.

Baraka, the rare politician who seemingly runs from credit, talked about how the city has turned since he took office.

It’s not just the improving metrics around education, crime, housing and development, but changing the narrative that has long plagued the city, he said.

“Four years ago, if you watched television, listened to the radio, read the newspaper or social media, you would have seen a bleak and negative narrative that was forced upon us and shaped the way people around the country viewed our great city,” he said. “It was so pervasive that some of us believed it, too, and it ripened into cynicism and recklessness. Not all of it was true, of course, but it began to take hold.

“However, just four years later, there has been so much progress going on that the media could no longer ignore it. … I am cutting ribbons almost every other week or breaking ground on new retail, restaurants, affordable housing, hotels, warehouses, market-rate units, university centers and more.”

Here are just a few things the mayor noted in his 61-minute address:

Development: He cited many of the city’s projects, including Military Park, the Hahne’s building and the Grammy Museum, and those under construction, such as One Theater Square, One Rector Street, Ironside and Triangle Park, which will connect Mulberry Commons from Penn Station to the Prudential Center.

Baraka also noted the efforts to make Newark a high-tech center, with its 27 miles of high-speed dark fiber. And, of course, he noted the city is one of 20 finalists for the coveted Amazon second headquarters.

Crime: Baraka said crime is at a 50-year low and the city has hired 500 new police officers since he took office, with another class or more than 100 anticipated this summer. The city also has taken 540 guns off the streets.

“The real story is that Newark police are making less unnecessary arrests while reducing crimes, and getting fewer complaints while reducing homicides and robberies,” he said. “While the rest of the country is talking about the Ferguson effect, Newark passed a Civilian Complaint Review Board. We have increased community engagement, opened a women’s support center with community involvement, implemented alternative policing strategies and have managed to achieve record highs in crime reduction.”

Unemployment: Baraka said unemployment is down from almost 12 percent when he started to 8 percent now. He said the city has created systems around Newark 2020, where corporate partners are committed to hiring more residents. He said 82 Newark residents have earned jobs after completing the Hire Newark employment ready boot camp at RWJBarnabas Health Beth Israel Hospital.

Housing: Baraka said the city has constructed 3,415 housing units outside of downtown, with 58 percent being affordable housing. It also has built a 125-bed homeless shelter, which he said has provided more than 14,000 bed nights since it opened.

Education: Baraka noted how Newark regained control of its public schools on Feb. 1 — and how the city’s public-school students are doing better, with now 78 percent graduating from high school and more going on to college than ever before. Baraka specifically noted Rutgers University-Newark’s efforts to help local students. Rutgers-Newark has increased enrollment of Newark high schoolers by 60 percent in recent years, giving full tuition to those with household incomes of less than $60,000.

More than anything, Baraka stressed the community needs to come together and stay together to move forward.

“We have been held apart by language, religious rituals, by individuals that do not understand that our national struggle is tied to our struggle for humanity,” he said. “By those that make money for themselves to keep us segregated and confused.

“We all want the same things: Wages we can live off, excellent education for our children, neighborhoods where our families are safe, to be free from sickness, disease and poison in our air and water, to have our constitutional rights upheld, to have the same chances as everyone and to be treated as human beings where we are documented or not.

“We can achieve this. We can make this happen.”