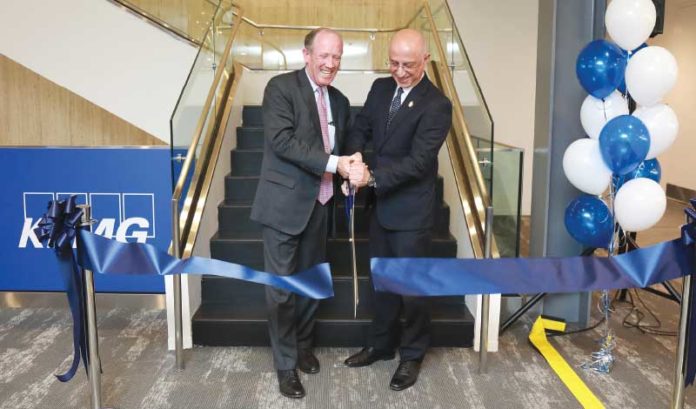 It’s one of many such events the mayor has attended in recent months as Montvale has had a business resurgence.

It wasn’t always that way.

When Mercedes-Benz announced in January 2015 that it was leaving Montvale for Atlanta, Ghassali said he and others had no idea the move was coming.

And they vowed to never let it happen again.

The efforts of many, including the volunteer-led Montvale Economic Development and Retention Committee, have helped the town have a resurgence.

And helped the town keep KPMG.

“We’re present in every state, so we did have a lot of choice and we are investing in a lot of spaces,” he said. “And, to be honest, when we were thinking about what to do here, that subject came up. Is this the place that we should be expanding or should we be moving jobs elsewhere?

“Once we looked at what we have here, what kind of people we could get and the fact that we saw the business benefits of bringing the technology groups into a high-tech environment where we could bring clients, we decided to bring it all together.”

Turner said Ghassali and his team deserve a lot of the credit for KPMG staying.

“He’s went out of his way to make sure he used his office within the bounds of what he’s able to do to make us feel as if we are part of the community,” Turner said. “That’s a very important aspect to it.