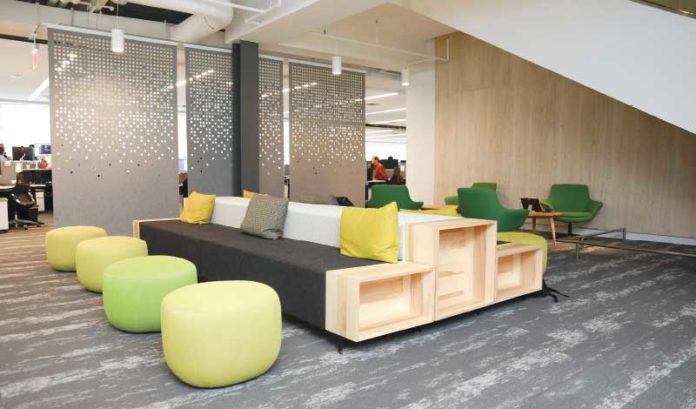 As you walk around KPMG’s state-of-the-art technology center, it’s easy to see why the company is so proud of its new building.

It’s not just the 86,000 square feet of space, but how it is utilized: desks in an open-space environment that can support employees present five days a week and those who work on and off campus, enough open-air and closed-door collaboration and meeting spaces to handle any needs, noise-mitigating walls, lighting that adjusts to outside sources of light, and — of course — all of the latest technology features, such as video conferencing and white boards in numerous collaboration areas.

But don’t call the center the prototype for the workspace of today.

“That’s what it’s all about,” he told ROI-NJ. “One of the things that we really focused on as a firm is how we could be future ready. A future-ready idea is really about the young people coming out of colleges.

“Our business model, we don’t have factories and we don’t have product in any other sense than we have people. We need people to come in inspired in the morning and come back the next day still inspired. This is all about trying to create an environment for people enjoying the workforce now or who are in the workforce early in their careers.

“Can we make it a culture that encourages collaboration, working together and innovation? Can we make it the kind of space that helps people think outside of the box?”

And do it with the latest technology.

“It’s a vision, not just a building,” he said. “It’s a vision of where we are trying to go on the Montvale campus. The vision inspires all of us to perform at our very best, whether it’s through collaboration, innovation, operating excellence, promoting the well-being of all our employees and, finally, supporting our community.

“That’s what the Montvale campus evolution is really all about. Today, we are celebrating the first step in that journey.”

That journey will bring 750 employees into one location, a technology center that is adjacent to KPMG’s existing 281,000-square-foot campus.

Together, the campus has the third-largest concentration of employees in the company, trailing only the offices in New York City and Chicago.

Those offices, however, are not as technology centered.

Felts said the benefits of the new technology cannot be overstated.

“For the first time in many years, all of our technology is in one location,” he said. “And that may not seem like a big deal, but when you think of technology and the people that need to talk and touch each other and try to drive where we are headed. Having them together at a place like this, where they can reach out, talk to each other and not just (use) videoconferencing and conference calls, that is really a big step for us.”

And not just for the future, for today.

And not just for the next generation, for all of the employees.

At least that’s what Turner has said has been the biggest surprise since the campus opened earlier this year.

“Before, a lot of the conversations I would have with people who were — let’s say more experienced — and were used to a certain way of working was defensive: ‘Don’t take away my privacy; I need what I’ve got,’” Turner said. “My goal was to create something that changed the conversation into, ‘Why can’t I have that’ — and that’s what we’re seeing.

“Everybody who comes to us and hears about it and sees the standing desk and the noise mitigation that we’ve put in place in the collaboration areas, they are saying, ‘What do we need to get that where we are?’”

Turner glanced out of the floor-to-ceiling windows in the cafeteria space.

It was a grey day. But not inside.

Because of the size of the windows, even the limited sun had an impact.

“To have people feel that light was part of the design,” he said.

Turner said that was stressed when the old building on the location was stripped down to make way for a more modern facility.

“The building that was here before was mostly solid. We wanted floor-to-ceiling windows all the way around and on all floors, and we moved as many offices as we could away from the windows,” he said.

“When you get natural light, people feel happier. And when people are happier, it’s well worth whatever you spend.”

Actually, you may save a bit.

Vanessa Scaglione, managing director, real estate, said some of the lights in the ceilings adjust to how much natural light comes into the building.

It’s just one of the many ways the company is going green.

And, while Turner is pleased to say the new building is environmentally friendly, he is quick to note that it all stems from his desire to create a friendly environment in the building.

“We spend more time working than we do anything else,” he said. “If we can create an environment where people enjoy being here and it’s fun, then we’ve got a great culture.

“It’s at the heart of everything we do.”