Home Politics Want to get into cannabis game? Working with local officials should be...
Facebook
Twitter
Linkedin 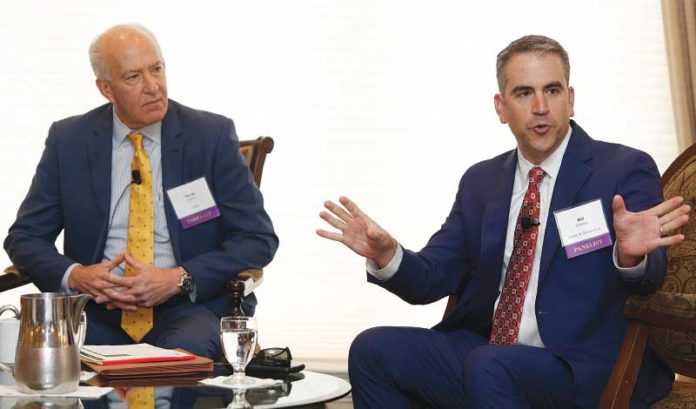 While New Jersey officials keep an eye on the mood in Washington, D.C., while figuring out the best way to proceed with legislation involving cannabis, experts say entrepreneurs looking to get into the game need to pay closer attention to municipal government.

So said Bill Caruso, an attorney and advocate on the cannabis industry for Archer & Greiner P.C. Caruso is recognized as a thought leader and major influencer in the industry.

“One area we’re losing the battle right now is at the local level, because of misinformation,” he said. “Although it’s turned a little back in our favor, we’ve seen town councils immediately rush out because they are confused about what they think they are going to be forced to do, and say ‘No.’

“They’ve actually frozen things, so they can be ready, but not have to pull the trigger.”

Caruso was speaking at ROI-NJ’s recent interactive panel discussion, “The State of Cannabis II: Understanding the Logistics of Cannabis.”

Juel said his equity firm tells interested entrepreneurs to make sure the towns they want to set up in want them there.

“We go around and speak to a lot of municipalities to see who is friendly,” he said. “You need to do that, because you may be able to get a license but not a permit in the area where you want to set up.”

“This advocacy at the local level matters,” he said. “It’s sort of a chicken and the egg (scenario). You can get your license and not have a location, or you can have a location and not get a license. You’ve got to do both at the same time.”

Caruso feels the interaction is good — and ultimately can help the process.

“There’s an ability to work with nervous mayors and governing bodies that want this or don’t want that,” he said. “I’ve heard people say, ‘I’m for medicinal, but I don’t want legal,’ and they don’t really understand it all.

“There’s a lot of opportunities there to get mayors right, get town councils right with this. Find that problem with the town, figure out how to all come together and solve it.”

Of course, none of this matters until the state passes legislation.

And even though Gov. Phil Murphy has said legalizing cannabis for recreational use is a top priority, Caruso admits advocates have a long way to go. And that, right now, a bill wouldn’t get through the Legislature.

Caruso, however, isn’t worried. Once again, he thinks it’s a good thing — and just part of the process.

“That’s why there’s not going to be a vote right now,” he said. “Sen. (Nicholas) Scutari (D-Linden), who is one of the leaders on this effort, has a bill … but if you put the Scutari bill up right now, it would fail, because it does not deal with a lot of the issues (people are talking about).”

Caruso talked about expungement — or the ability for people convicted of a crime involving cannabis to have it removed from their record if cannabis becomes legal.

“How you do that and what resources would have to be thrown at that? Because it’s an expensive and drawn-out process,” he said. “That’s right, that’s fair, that’s good, but it’s also very complex and expensive to figure out how to do that.

“Sen. Scutari has said: ‘It’s not in my bill. You can get it in our bill, but go figure out how to get it done and get the votes for it.’

“So, the advocates are out doing that. And there’s a bunch of issues like that that have to be worked out.”

Caruso viewed a recent objection from Sen. Ronald Rice (D-Newark) as a positive — simply because he was talking through the issue.

“The Legislature is engaged right now,” he said.

Caruso feels a bill that all sides will be happy with will be constructed.