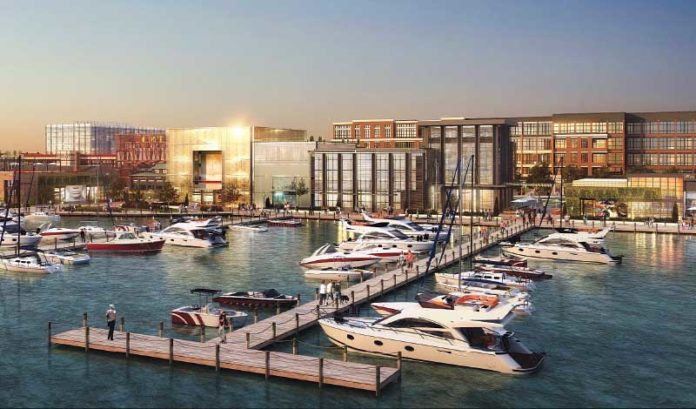 With three decades of experience of bringing cool, hip, trendy and high-end retailers to projects across New Jersey and across the country, he understands the value retail plays in any project.

“Retail always is at the forefront of people’s interest, just because we all live retail,” he said.

That’s why Weinert, who helped lead the upgrade of the Mall at Short Hills and worked on One World Trade Center, is so excited to lead the way on Riverton, a $2.5 billion next-generation “experiential mixed-use” project that Atlanta-based North American Properties is bringing to Sayreville.

He said this first-of-its-kind project for New Jersey — a mixed-use facility that will combine retail, office and a hotel with multifamily and single-family residential, an entertainment complex and a marina — will attract one-of-a-kind retailers.

Weinert said he’s been talking to retailers since the November announcement of the project.

He said those retailers have been waiting for his call.

“Lots of tenants have been on this site for a long time,” he said. “This is really considered one of the great sites in the country for retail. And the fact that we are now taking to market this very current plan, which is a retail-driven mixed-use development, is perfect.

Weinert, a partner and senior vice president at the firm, said a lot of digital brands are looking for places to open brick-and-mortar locations. Riverton, he said, may be that opportunity.

“There’s 30 native digital brands that were only pure-play online businesses before that are now opening stores,” he said. “It’s led by Amazon Books, with their 13 bookstores, but there are 29 more, and they’re all opening stores.

“These guys have realized online business is going to be capped if they don’t have a significant bricks-and-mortar presence. At the end of the day, it’s all about seamless integration between digital and bricks and mortar, or you’re going to fail no matter who you are.

“The state of New Jersey is minus about 29 of these native digital brands. The ability to sell a retailer to be in the sphere of the New York influence — to sell that opportunity is just huge. I’m going to say ‘unique point of difference merchandising’ a million times before we’re finished.”

Mark Toro gets it, too.

As managing partner of North American Properties, Toro has led the push to bring the 418-acre project to his home state.

The project, he said, is taking small but important steps toward its eventual completion.

“(In November) it was an idea — now, it’s a plan,” he said. “We have spent the last six months or so building a team out and creating a plan.”

Toro said the group hopes to make announcements regarding retail anchors this fall and put the first shovels in the ground next spring.

From there, he said, it should be a five-year build-out.

There are plenty of financial and legislative steps in the process.

Toro said the project has received concept approval from the Sayreville Economic Redevelopment Authority, which is the agency that governs the site.

It will still require approvals from more local and county agencies — and the firm is awaiting word from the state Economic Development Authority regarding an ERG incentive grant of $233 million that was approved for a previous iteration of the project as well as a payment in lieu of taxes agreement from the town.

The ERG approval could come as soon as this summer, Toro said.

“We are going to amend that (ERG) grant to match the scope of that project,” he said. “The project essentially has taken a concept that was ill-fated and now obsolete, a regional mall, and replaced it with an experiential mixed-use, which is what we perceive to be the future.”

Toro said the company is hopeful and confident it will get all of the necessary approvals. So much so, he said, that the project manager recently moved to New Jersey.

“A deal isn’t done until it’s done,” he said. “Until the ERG grant is in place, we don’t have a project. It’s a critical component.”

Toro said North American Properties has enough bandwidth to handle most of the project, though it expects to bring on a local broker to handle office leasing.

“That’s a local specialty,” he said.

In addition, the company is working with Maser Consulting, Gibbons P.C., Optimus Partners, Jaffe Communications and Over the Moon PR.

Despite the size of the project, Toro acknowledges it has not been seeking publicity.

“They’ll catch on,” he said. “It’s a matter of when announcements are made and shovels go in the ground.

“I’m told 400,000 cars a day or so go past that site; it’s one of the most high-profile sites in America. It will be hard for people not to get a clue. But we’re just beginning the process of PR and social media.”

Last Tuesday’s event at the Sayreville Senior Center was not meant to create publicity, Toro said, but rather to build a relationship with the town.

“This is what we do,” he said. “In every community that we enter, we get to know the residents. We talk about building communities. This is the first stop in the community-building process.”

Projects such as Riverton come in stages, Toro and Weinert both said.

Weinert’s effort will be more out in front. He knows how the pieces come together.

“The establishment of momentum traction is key,” he said. “Every project varies a little bit. On this project, we are the beneficiaries of 400 acres of development opportunity.

“There are a lot of live space users that I’d really like to get first, whether it be the big theater or the big gym or the big food hall or the big live entertainment venue. All of these things would give us traction in all of the other categories. So, when I go to the next group of retailers, I can sell that traction.”

Retailers on the boulevard of shops come next, he said.

“(Those retailers are) what drives the valuation of a mixed-use project, because it’s all about the street-level energy,” he said. “And if you create that right energy with the retailers, then the residential and the office and the hotel falls into place in a very robust way.”

Toro said the office market will feed off that start.

A Rutgers University graduate, Toro said he’s familiar with the New Jersey landscape — and the issues it has had with corporate campuses going bust.

His experience outside the state has shown him this isn’t just a Jersey story.

“New Jersey is not unique in that,” he said. “Our Avalon community in Alpharetta (Georgia) was just like New Jersey. All these corporate campuses were built and now they are being vacated because people don’t want to work there anymore.”

Toro said his experiential mixed-used projects have solved some of the problems.

“We did it with Microsoft in Alpharetta,” he said. “They were in a suburban office park and now they took two full floors at rents that rival those in Buckhead and Midtown Atlanta.

“And, while we’ve been talking about our community in Alpharetta, it’s also been done in Boston and Houston and Dallas and San Jose and Columbus. Each of those communities has drawn the interest of large corporate users because the next generation of what I’ll call knowledge workers seeks that lifestyle experience.”

That experience, Toro said, is ultimately what will drive the project.

“We have to create energy and we have to capture it and hold it 18 hours a day because that’s what this resident, guest, hotel, businessmen, visitors require,” he said.

Toro said his firm is hearing from retailers who are looking to plant a flag in the New Jersey market.

David Weinert, a partner and senior vice president who heads up the retail leasing component of Riverton, said the property will not necessarily take from the retail malls closest to it: Menlo Park Mall, Woodbridge Town Center and Freehold Raceway Mall.

Weinert said that, because of the uniqueness of the project, the properties will not necessarily be competing for the same tenants.

“Nothing against Menlo Park, or Woodbridge or Freehold, but here’s what’s going on today: There’s about 150 cool, expanding retailers that will never set foot in those malls,” he said. “That’s just not where they are going to go.

“That’s my unique point of differential merchandising opportunity. I don’t want to take away from the mall to develop Riverton, and that’s the beauty of the whole retail model. It’s not a zero-sum game. It isn’t about taking away or getting the mall to shut down, it’s just delivering what the consumers want.”