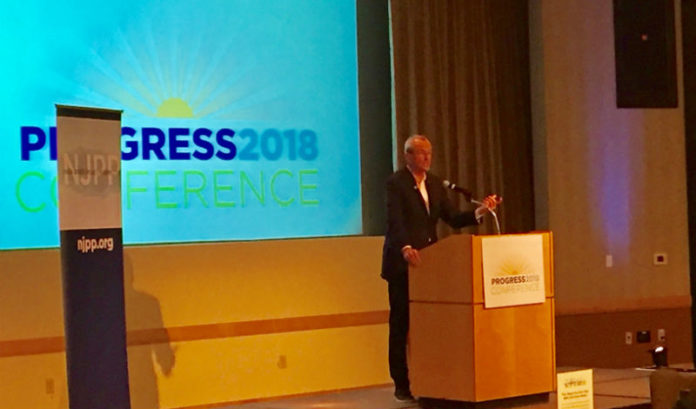 Gov. Phil Murphy, the keynote speaker at the New Jersey Policy Perspective Progress 2018 event last Friday at the Heldrich Hotel in New Brunswick, reiterated his belief that raising taxes is necessary to help implement his vision of a “stronger and fairer economy.”

More taxes — from a millionaires tax to a rise in the state’s sales tax — are coming. And Murphy feels he has the strong support of the state’s residents to implement them.

“This is the only way we are going to move New Jersey up and out of the deep hole we’ve been in for far too long,” he said. “(Residents) want those of us in leadership, beginning with me, to speak to them as adults, not at them. They understand we need to make tough choices, but they also respect when we must make those tough choices.”

Murphy sees increasing revenue through taxes is the only way the state can invest in the things it needs to grow — restoring a value proposition (pay more to get more) that he said has been lost in recent years.

“The budget I propose aims to restore this value for money equation to its proper balance,” he said. “Yes, the millionaires tax is the right thing to do, so we can invest directly in our middle class and our working families and in our students.

With that, Murphy took aim at his predecessor, saying Gov. Chris Christie ignored the plight of the citizens for his personal gain. He saved his harshest words for the sales tax decrease Christie implemented while raising the gas tax.

“That was a complete personal narrative tax gimmick, so somebody could say to increase the gas tax, which we had to do, we didn’t raise taxes,” Murphy said.

“Let there be no doubt, cutting the sales tax wasn’t done for any specific policy reason, whether we agreed with it or not. It was done as a gimmick, so some guy could stand up and say, ‘I didn’t raise taxes.’

“The days of gimmick, house of cards financial smokescreens are over. Period. Full Stop.”

The line drew one of many rousing ovations from the crowd during the 25-minute address.

Murphy acknowledged raising the sales tax will hurt the middle-class and working-class families he said he is aiming to help. But, he said, he feels it’s a fair deal.

“If you make between 75,000 and 125,000 in your household, I can tell you to the dollar what restoring that sales tax will mean,” he said. “I know exactly to do the dollar, the pain associated with that, but more importantly, I know the multiples of those dollars that we’ll be able to deliver to you and your kids over the next couple of years.”

He said he is confident he has the support of residents of all income levels.

“We know the people of New Jersey are with us on this one,” he said. “We’re not guessing on this one. We know they support ensuring that millionaires pay their fair share. The days of us vs. them are behind us.

“This is about fairness, it’s about equity. If you’re wealthy in this state, I want you also to look at the equation we are going to present in the coming years and say, ‘You know what, it’s worth it.’”

It’s a complete repudiation of the policies of Christie. Policies, he said, that were disproven decades ago.

“The value proposition was ignored by an administration that, while it could tell you the price of everything, had real trouble discerning the value of anything,” he said. “It was replaced by the thinking that if you protect the very wealthy and the biggest corporations, somehow, some way, things would work their way up for the average family.

“We know from the experience during the Reagan years of the ’80s that trickle-down and all that goes with it doesn’t work. So, I’m frankly not sure why we thought differently in 2010 or in the intervening years, or why President (Donald) Trump and the Republican congressional leadership in Washington still think that in the year 2018.”

Restaurants need to reapply for permits (by Dec. 1) to continue...