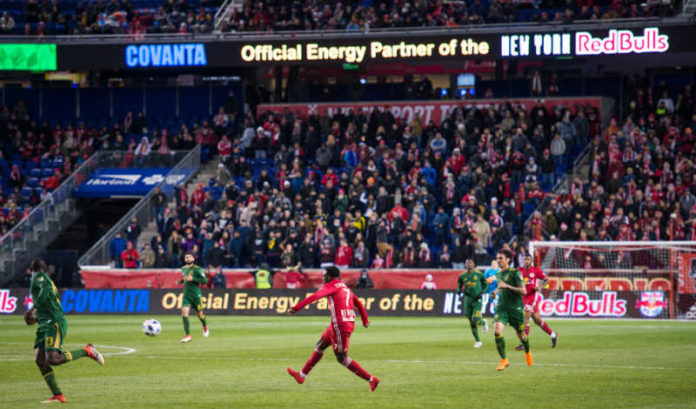 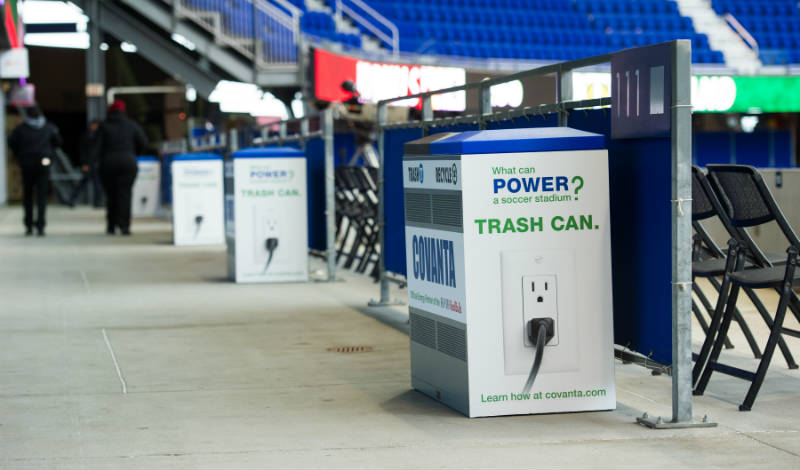 Covanta’s logo is on many of the trash and recycling containers at Red Bull Arena. – Covanta

The New York Red Bulls announced Wednesday their official energy partnership with Covanta, a $1.7 billion world leader in sustainable waste and energy solutions in Morristown, to power Red Bull Arena in Harrison from the company’s Essex Facility in Newark.

“Our club is thrilled to partner with Covanta, an environmentally conscious and socially aware company that also happens to be our neighbor here in northern New Jersey,” Marc de Grandpre, general manager of the Red Bulls, said. “With this partnership, Red Bull Arena will now be powered by 100 percent renewable energy.”

Having shifted from using primarily fossil fuel-generated electricity to using renewable energy at the end of last year, Red Bull Arena is expected to significantly reduce its carbon footprint, saving more than 5,000 tons of carbon dioxide from being released into the environment, Sami Kabbani, senior vice president of energy at Covanta, said.

“With less than two miles separating Covanta’s energy-from-waste facility in Newark from Red Bull Arena in Harrison, the partnership takes advantage of locally-produced renewable energy that directly benefits the surrounding communities and continues to keep trash out of landfills,” Kabbani said.

The company, which employs 3,700 worldwide, then directs the clean, renewable energy to the grid and to consumers such as the Red Bulls, which, having competed in Major League Soccer since 1996, now play in a 25,000-seat stadium in Harrison, constructed in 2010.

“As a team, we, too, are very focused on our goal and mission to become an environmentally conscious and socially aware company,” Amy Scheer, chief commercial officer of the Red Bulls, said. “We therefore look for partners who have the same mission and vision as us to make our community a more sustainable and better place to live. Any partner of ours must also make the community a focus of our partnership.”

Red Bull Arena not only has branded many of its trash and recycling receptacles with the Covanta logo, but also has named the company its official energy sponsor and presenting partner of the “Pinpoint” game in the “bullevard,” the club’s free fan attraction before every match outside the arena.

“This will help the message of renewable energy reach a younger audience,” Scheer said.

Kabbani said that, although Covanta’s prices are competitive with nonrenewable sources of electricity and that it takes “very little to no effort” to switch providers, it can be a challenge to encourage other businesses and corporations to follow suit.

“Each state has its own rules and regulations, which tends to make the process a bit onerous,” Kabbani said. “An additional challenge, which I also view as an opportunity, is that our company truly must understand the needs of the customer to provide a product at a price they feel good about.

“But, as more and more businesses continue to look for alternative sources of renewable energy like ours, we hope that our partnership with the New York Red Bulls will bring more attention to our industry and the fact that there are better ways to produce and obtain electricity.”

Scheer said the Red Bulls are proud to be a vehicle for that message.

“People underestimate the power of soccer, the power of the Red Bulls and the power of our fans,” she said. “Soccer fans especially are very conscious of which companies partner with and support their sport. That, in turn, often makes our fans great consumers of our partners, too.”