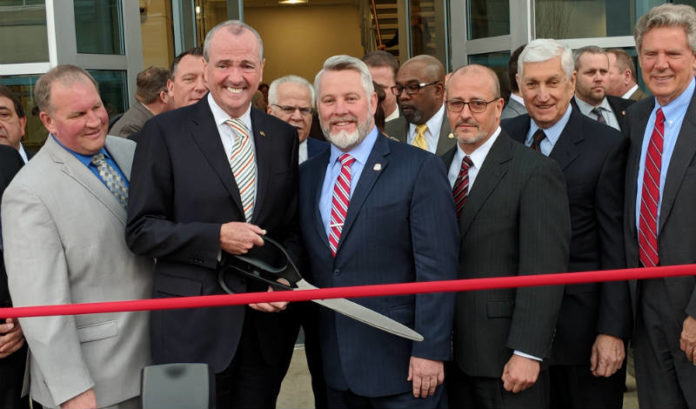 Northeast Regional Council of Carpenters Executive Secretary-Treasurer John Ballantyne called the facility “a jewel” and said it will be a difference maker in the lives of those will come through it and participate in apprenticeship programs.

“It’s a five-year program,” he said. “A young man or women can come into this organization not knowing anything about carpentry, learn the basics and move on to become a journeyman carpenter.

“Every aspect of the construction industry with regards to carpentry is taught here at this facility.”

Ballantyne said the facility represents the future of the organization and the state.

“This is a unique facility, because it’s a collaborative effort between our union partners and the industry as a whole to recognize the skill sets that are necessary to carry a young man or woman in that career path, but also to be the most efficient, productive members of the workforce,” he said.

“I’ve been saying it for a long time,” he told those in attendance. “New Jersey was built by union hands and, working together, we will see that union hands rebuild it for a stronger and fairer future. This facility is central to that effort.”

Murphy said his administration is eager to help.

“Equally important will be a commitment from us, at the state level, to workforce development, including apprenticeship programs,” he said.

Murphy said he learned the value of vocational apprenticeship programs during his time as ambassador to Germany. He said programs in that country were the “secret sauce” to their economic growth.

“There’s no question that for every dollar and every amount of energy you put in a training or apprenticeship program, you get multiples of it back,” he said. “Not just in the life of that man or woman, but in society more broadly.”

Murphy said facilities such as these play an important part in the future of the state.

“The New Jersey we all envision — strong infrastructure, buildings where are young people will learn and new businesses will grow, solutions to our housing issues — none of it will sprout up on its own,” he said. “It will take skilled hands to build and, right now, we don’t have enough of them to accomplish all that we want to, or, frankly, need to.”