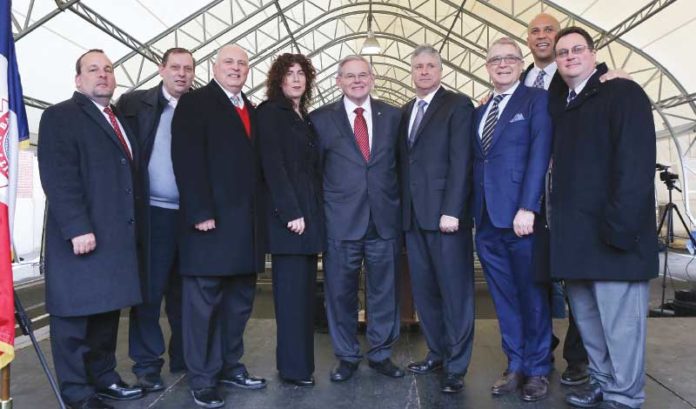 “The opportunity to develop 1.6 million square feet of state-of-the-art industrial warehousing, especially given the immediacy of e-commerce and the expansion of same-day delivery services, is a rare opportunity in an environment where land near the port is very scarce,” he said.

Lincoln Equities Group formally announced its acquisition of a 90-acre site on the Bayonne waterfront in a news conference Thursday, with plans to redevelop the former Military Ocean Terminal at Bayonne, known as MOTBY, into 1.6 million square feet of modern industrial built-to-suit warehouse space.

The sale, expected to close in May, will create more than 2,700 jobs for the state, generated by construction and future tenants.

Bayonne Mayor Jimmy Davis said nothing makes him happier than to bring those jobs to the city.

“The city has been negotiating with Ports America and Lincoln Equities for a little more than a year, and today is a culmination of those efforts,” he said.

The new facilities also are expected to increase and support trade at the Port of New York and New Jersey, U.S. Sen. Cory Booker (D-N.J.) said.

“What makes today so incredibly important is the understanding that we will create a cycle of economic growth that will not only stand to benefit areas like Bayonne but also will create thousands of jobs and economic activity to bolster the entire region,” Booker said. “This project is a testimony to how the federal and local governments can work together with industry to create tremendous opportunity.”

Built with the idea of accommodating large e-commerce companies, the site already has attracted tenants such as Costco and Starbucks and will include new residential developments and a commuter ferry terminal.

“We see tremendous potential in this underutilized waterfront site and look forward to transforming it into a location that can attract a large company,” Bergstein said.

The Military Ocean Terminal, which is located along the Hudson County waterfront and New York Harbor, was previously home to a Navy base starting in 1941 and later repurposed as an Army base in 1967. The site has remained dormant for more than a decade after the base closed in 1999.

“Highstar Capital and Ports America Group owned the site and decided to sell partially due to a lawsuit from residential developers who did not want to see fixed cranes on site,” Bergstein said. “This was a highly competitive bid and we were fortunate enough to be selected.”

Davis said he sees the sale as a direct result of the widening of the channel and the raising of the Bayonne Bridge.

“Now, companies want their warehouses closer to the ports, whereas years ago, many sent them down toward South Jersey,” he said. “Their return will result in an economic boom for this area.”

The redevelopment is expected to take three years, Bergstein said.

“Most of the buildings date back to World War II and will need to be demolished,” he said. “The elevation of the site also needs to be raised six feet to meet post-Sandy FEMA standards. That process will take about 18 months and will require 2 million tons of clean fill before we can start construction on the first buildings.”

The property, Bergstein said, will be developed into the next generation of industrial warehousing, with 36- to 50-foot ceiling heights and 50-foot column grids.

“This will help to accommodate the larger vessels and volume of goods now coming into the port,” he said.

While the project is expected to create millions of dollars in new tax revenue for Bayonne and massive economic development for the city and the region, U.S. Sen. Robert Menendez (D-N.J.) said the announcement of this project also is great news for the country.

“Our ports are a gateway to global commerce and engines of economic growth that create decent, good-paying jobs which allow our workers to support their families and the nation’s economy,” Menendez said. “A strong New Jersey economy helps fuel a strong American economy, with the Northeast corridor contributing $3.7 trillion to the nation’s gross domestic product each year.”

Bergstein said Lincoln Equities Group has been very pleased with the level of support his company has received from the city of Bayonne, the state of New Jersey and the federal government.

“From our first meeting with Mayor Davis and his staff, as well as with state and federal representatives, we have felt we had a partnership in the economic rebirth of this important peninsula in Bayonne,” he said.

“We look forward to working with Lincoln Equities Group as the firm transforms this area of Bayonne, creating jobs and fueling the city, county and state economics,” Davis said.