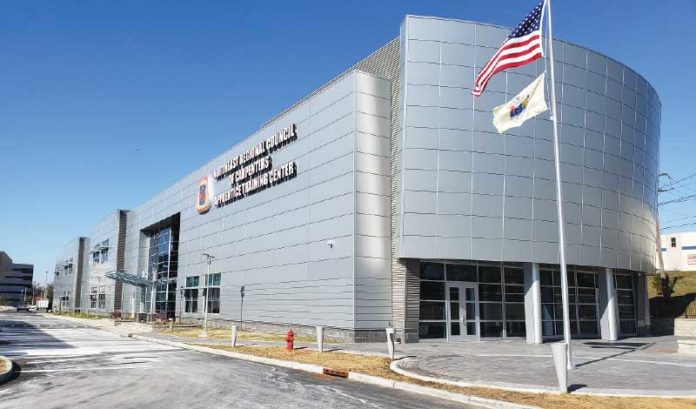 The speeches, coming from some of the top labor and political leaders in the state, were nice.

What organizational head wouldn’t want a member of the U.S. House and the sitting governor of his state praising his new facility and pledging to support it.

John Ballantyne, the executive secretary-treasurer of the Northeast Regional Council of Carpenters, said as much. But Ballantyne knows that, after the attendees go away, the real work starts at the facility.

Training a new generation of workers is not just a good thing for the future of the state, it’s a necessity.

This facility shows how the carpenters are taking the lead in the effort — and is just another reason why many feel they have become the most influential and important union in the building trades.

“It’s a five-year program,” Ballantyne said. “A young man or woman can come into this organization not knowing anything about carpentry, learn the basics and move on to become a journeyman carpenter.

“They can learn solid surfacing material, mill cabinet, dry wall interior systems, acoustical ceilings, doors, hardware, welding — we even do pile driving training. Every aspect of the construction industry with regards to carpentry is taught here at this facility.”

Unions are changing. In more ways than one.

Leaders such as Ballantyne and Greg Lalevee of the International Union of Operating Engineers talk openly about how unions want to play a bigger part in economic development, partnering with developers and municipalities to ensure projects come in on time and under budget.

And they talk about embracing a new type of worker.

Later this month, the carpenters will have a three-day conference, Sisters in the Brotherhood, in an effort to increase female participation.

“Women and minority participation is really going to save the labor movement,” Ballantyne said. “It’s going to be the backbone moving forward. That’s who we want to represent. We want to make sure that the members of all of those communities, including the inner cities, understand that there’s an opportunity for people to not just have a job but a career path.”

Murphy agreed. He has long stressed support for unions.

“I’ve been saying it for a long time,” he told the more than 200 in attendance. “New Jersey was built by union hands. And, working together, we will see that union hands rebuild it for a stronger and fairer future. This facility is central to that effort.”

Murphy said his administration is eager to help.

“Equally important will be a commitment from us, at the state level, to workforce development, including apprenticeship programs,” he said.

Those type of programs will take place at the training center, which not only has hands-on training for all the skill sets in carpentry but rooms with the latest technology to lead classroom instruction.

Ballantyne feels the carpenters now have everything in place to move forward.

“This is a unique facility, because it’s a collaborative effort between our union partners and the industry as a whole to recognize the skill sets that are necessary to carry a young man or woman in that career path, but also to be the most efficient, productive members of the workforce,” he said.