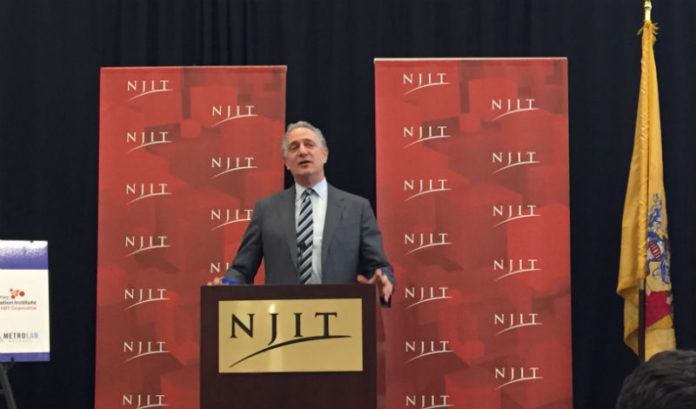 Residents and visitors of Newark likely will see the coming 45 LinkNWK kiosks as a cool feature of the city, one where they can get the latest news and information, make calls to anywhere in the country (for free) and even download music and movies — again, for free.

“The residents of New York save tens of millions of dollars on their data plans,” Dan Doctoroff, the chairman of Intersection, said at an introductory media conference Wednesday afternoon on the campus of NJIT.

But Doctoroff knows the value of the product — which is up and running in New York, Philadelphia and London — is much greater than that.

Doctoroff feels it can be a game-changer for any city.

“Link is something much more powerful,” he said. “It really is about the future.

“With Link, what we are doing together is fundamentally reinventing the whole idea of information in public space. Think of Link as a platform of communication with people in real time in public space and you can begin to imagine the possibilities.”

Joel Bloom, the president of New Jersey Institute of Technology, certainly can.

The platform, he said, can further the university’s mission of making Newark a smart city that can be emulated by all.

From the New Jersey Innovation Institute, under the direction of Don Sebastian, to the more than 90 companies at incubators on campus, to the faculty and the students, the Link platform offers endless possibilities, Bloom said.

“There are a lot of applications that are being considered in so many areas,” he said. “Things as simple as having cameras to see which have been plowed when it snows to security aspects to see what’s going on.

The concept works particularly well in Newark, which has a vast network of dark fiber already under its streets.

And while the Link network will help employees and visitors to the city, Newark Community Economic Development Corporation CEO and President Aisha Glover said the city is making sure all of its residents benefit, too.

“In addition to identifying areas in the downtown, we are targeting every ward of the city to make sure they are kiosks in their neighborhoods as well as having them along the commercial and retail corridors,” she said. “(We’ll have) two in each of the outer wards of the city.”

The first kiosk will be set up in the fourth quarter, Intersection Chief Operating Officer Chris Grosso said.

By the end of the first phase, 45 kiosks will be put up — at no cost to the city or its residents. Each will have a range of 100 to 150 yards, so they can be used by many simultaneously.

Doctoroff said Intersection will provide the startup costs, he estimated costs to be in the millions without being specific. The company business model is built on advertising to pay for the service.

And while Doctoroff certainly is involved in the project to make money, he said he is happy to be providing something that is helping bring back the country’s urban areas.

“I’m a believer in what I call the virtuous cycle of the successful city,” he said.

Doctoroff, who was born and lived briefly in Newark, said the city’s recent growth has special meaning to him.

“We are making a commitment and investing in Newark because we believe in the future of Newark,” he said.

“We see the potential here. And it’s not just potential, it’s reality.”