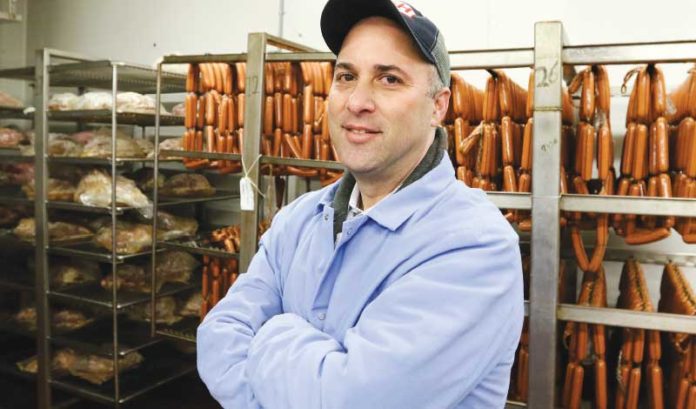 Seth Leavitt said he already has his work cut out for him this Passover.

“It’s a big part of our business,” he said. “So large, in fact, that we devote nearly a quarter of our year to Passover production.”

But this year, due to a recent investment of $400,000 in a new Multivac packaging machine from Germany, Leavitt said Abeles & Heymann will be able to double or triple its output.

“We used to package nearly 1,000 pounds of salami, for example, in roughly an hour and 20 minutes,” Leavitt said. “With this new machine, we can now package the same amount of salami in 20 minutes.”

The anticipated resulting growth of nearly 30 to 40 percent this year is certainly something to celebrate as Abeles & Heymann concludes its Passover production and moves on to furthering its continued goal of conquering new market segments.

“We’ve opened up a lot of opportunities for ourselves with the purchase of this new machine,” Leavitt said.

Including, he added, becoming a household name.

Abeles & Heymann was founded by Oscar Abeles and his nephew, Leopold Heymann, as a storefront in Washington Heights, New York, in 1954.

After the family relocated the business to a 2,500-square-foot facility in the Bronx, Leavitt and his then-partner, David Flamholz, purchased the company in 1997, working side-by-side with Heymann to maintain the founding family’s strict standards for quality and authenticity using old world recipes.

“We believe our product is and tastes better,” Leavitt said.

After Leavitt moved the business from New York to its current 18,000-square-foot state-of-the-art facility in Hillside in 2006, the company saw more than a tenfold increase in sales by having the capability to manufacture and sell to supermarket chains and major club stores.

Leavitt also frequently began attending trade shows, such as Kosher Fest at the Meadowlands Expo Center, where he met and created a partnership with Micha Rakaby, president of Hod Golan, more than six years ago.

“We saw more than 50 percent growth after partnering with Maadany Yehiam, the Israeli manufacturer of the Hod Golan line of poultry products, in 2012,” Leavitt said.

Maadany Yehiam was founded in 1969 as the manufacturing branch of the agricultural collective Kibbutz Yehiam, founded in 1946 in the Western Galilee.

With the ability to produce and sell both beef and poultry products, Abeles & Heymann has been able to employ nearly 30 and achieve annual revenues between $7 million and $10 million.

Still, while Abeles & Heymann products currently can be found in the Kosher departments of most major supermarkets, including ShopRite and Costco, Leavitt said he wants the company to become known for much more.

It has been Abeles & Heymann’s goal for more than a year now to break out of the Glatt Kosher market, Leavitt said.

“We’re still finding it a challenge to get off the Kosher shelves and into the sections that house brands such as Applegate Farms,” he said.

In fact, it used to be the only manufacturer of an uncured, reduced-fat, low-sodium, no-nitrates-added Kosher hot dog that used natural ingredients such as celery powder and cherries, Leavitt said.

“But Hebrew National just came out with a (similar) hot dog,” he said. “I believe they did that not only because they, too, see the benefits in reaching a market segment that requests healthier products, but also because they noticed us.

“We caught their attention, for better or worse, because we’ve been making no-nitrates-added hot dogs for about seven years now and the product line continues to grow.”

The company also spent time and money redesigning its packaging and labels to emphasize the health benefits of eating Kosher, Leavitt said.

“But one of our major stumbling blocks, still, is name-brand recognition, even though we are a 64-year-old company,” he said.

O’Brien previously spent most of his career as vice president of sales at The Manischewitz Co. in Newark, as the ethnic merchandising manager at ShopRite and as a store manager and corporate ethnic product manager for Pathmark Stores.

“He’s certainly made some in-roads for us in Kosher markets that we had not yet reached,” Leavitt said.

Even though Leavitt said Abeles & Heymann’s ultimate goal is to expand outside the Kosher section, it would never, by any means, abandon its core customers.

“We are a leader in Jewish communities in Bergen County, West Orange, Livingston, Lakewood and in Florida, California and Illinois,” Leavitt said. “But our salesmen are now focusing on out-of-state customers, because there is a lot of low-hanging fruit outside of the New York and New Jersey market.”

The consumers already familiar with Abeles & Heymann products, who grew up eating and choosing their deli meats, are now in their 40s and 60s, Leavitt said.

“There were items that we made 20 years ago, such as liverwurst, for example, that we discontinued,” Leavitt said. “And still, every so often, we will get an email or a phone call from a customer looking for that product.

“But there is this new consumer group, too, between the ages of 25 and 40, who are more social media savvy,” he added. “That is why we also have increased our presence on Instagram and Facebook, to be able to reach them.”

If there were any question of whether the Kosher market continues to grow as customs and traditions change among younger generations, Leavitt said the sales speak for themselves.

“Last year, we saw an 8 percent increase in sales,” he said. “We’ve been selling more product every year for the last 20 years and continue to increase sales every year.”

This year, Leavitt added, will be Abeles & Heymann’s biggest growth yet.

There were many orders in the past, Leavitt said, that the company simply was not able to fill.

“We just didn’t have the time to package the product,” he said.

Now, with the addition of the new   packaging machine and an increase in output, Leavitt said costs per pound also will decrease.

“We currently are more expensive than brands such as Hebrew National, which may prevent people from picking up our products if they are not familiar with our brand,” he said. “We believe we will be able to reduce our costs and pass those savings on to our current, and hopefully, potential customers.”

“We used to apply labels by hand, with one or two people being able to handle the volume,” he said.

No one, however, is being cut from the floor, Leavitt said.

“We will be redirecting labor to our boxing room because the packages will be coming off of the machine that much more quickly,” he said.