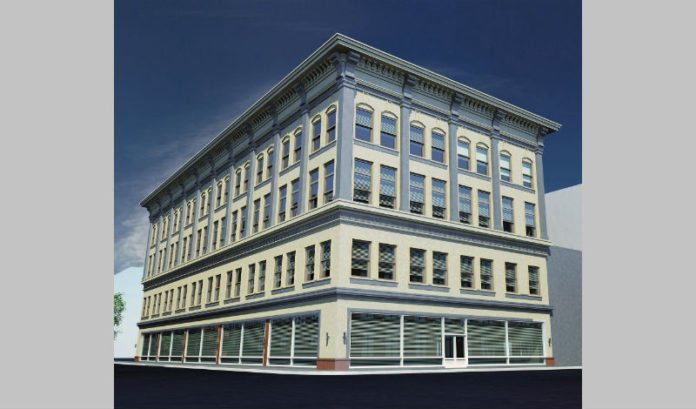 Construction has hit the middle mark at William Flats, a luxury multifamily rental property in Newark, according to Paramount Assets, the properties developer.

William Flats is located at 869 Broad St. between Teachers Village and the Prudential Center, in the heart of Newark’s Four Corners neighborhood.

Paramount Assets said it is transforming the former United Women’s Garment Workers’ Union headquarters property into 37 luxury apartments along with 12,000 square feet of retail space on the ground floor.

Paramount Assets’ Richard Dunn, senior vice president, said the company set out to create a multifamily property that complements Newark’s neighborhoods and symbolizes the continuation of the area’s revitalization.

“William Flats is a historically significant property that will be ideally suited to serve the lifestyle needs of anyone looking for outstanding mass transit access and a walkable neighborhood that offers shopping, culture and entertainment, recreation, and nightlife opportunities,” Dunn said.

Paramount Assets said it has preserved parts of the original building, including its façade, while incorporating modern conveniences into the properties studio, one- and two-bedroom units.

It will also feature a vertical garden, Dunn said.

“This environmentally friendly mini-garden will grow along a two-story wall with the help of a trellis,” Dunn said. “The entire courtyard, dotted with benches, will bring a bit of nature to William Flats residents — offering a peaceful getaway in the heart of a bustling urban downtown.”

The property is slated for completion in October, with leasing to start in August.

Paramount said it current has secured its first commercial tenant, and has signed a letter of intent with a national retailer.