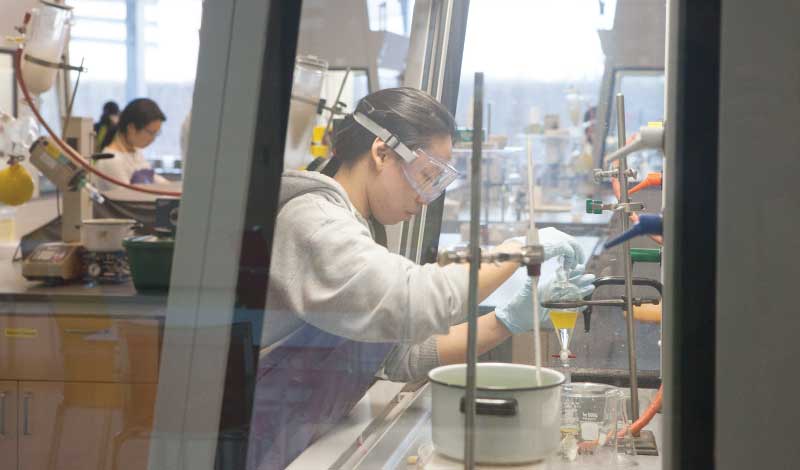 At Princeton, lab work is a key to research. – Princeton University

With more than $650 million in annual research expenditures, Rutgers University is outdoing itself.

But it isn’t doing it itself.

More than ever, even with its Garden State research engine never running stronger, Rutgers teams with other New Jersey universities to conduct research projects.

Christopher Molloy, senior vice president for research and economic development at Rutgers University, explained that schools across the state aren’t inclined to work alone, as once was the case.

“This is a real phenomenon: schools are starting to work together better,” Molloy said. “What we’ve seen is a change away from the competitive stances that universities long had with research activities.”

It helps that rather than having several institutions battling to win grant funding for studies over other institutions, Molloy said funding from state, federal or other agencies increasingly often supports the pooling of resources among research universities.

“A lot of the leadership at different state universities are becoming more attentive to this,” Molloy said. “Government has also steered them into thinking outside their own ivory towers — to start looking at multidisciplinary opportunities across different institutions.”

New Jersey research universities are taking on some of the heaviest hitting projects to date — research that could have implications on the future of pharmaceutical production, Big Data and drone technology.

Don Sebastian, president of New Jersey Innovation Institute, a New Jersey Institute of Technology corporation that focuses on the commercial aspects of the school’s findings, said the scale of research underway today makes it all the more important to work with other universities.

And so the story of recent research projects in the state has been one of constant collaborations between NJIT, Princeton, Rutgers and other universities.

“These are problems too big for any one university or for one company for that matter,” Sebastian said.

The banner initiative of local research universities right now is the work being done to improve pharmaceutical manufacturing.

Rutgers and NJII announced late last year that they would be pursuing the establishment of a center known as the New Jersey Continuous Manufacturing Institute.

Sebastian described the center as the culmination of a partnership that has evolved for many years to research efficient manufacturing solutions for the pharmaceutical industry.

“And this is a collaborative endeavor that we think will bring in new jobs as companies are formed around this technology, including companies that sell the equipment needed in this process,” Sebastian said.

“That would be an important shot in the arm for the state’s economy.”

The local research initiative is centered around continuous manufacturing, which is touted as a faster and more reliable manufacturing process for pharmaceuticals. It’s something the FDA has identified for its potential to entirely transform drug discovery and production.

“It all brings the possibility of doing in a room what used to take a baseball field to do,” Molloy said.

“I’m sure a lot of Jerseyans remember the Roche plant on Route 3. Pharmaceutical manufacturing needed that sort of big process equipment on large sites. But now we’re finding it doesn’t require large plots of land — especially where land is expensive — or anything that adds any insult to the environment.”

The local continuous manufacturing research began to formulate back in 2006, when Rutgers launched its Center for Structured Organic Particulate Systems. The $2 million production facility was built with funding from the National Science Foundation.

One of the largest projects ever funded by the National Science Foundation involves something Rutgers also is tackling with several other universities.

The multimillion-dollar Ocean Observatories Initiative will have experts monitor ocean sea life and geothermal activity based on computer systems designed by Rutgers.

And while the National Science Foundation’s prioritization of collaborative efforts has brought the state’s research universities into close quarters, it is not the only entity pushing this.

New Jersey’s legislature also has directed its universities to sit at the same table.

Under Gov. former Chris Christie, the state’s legislators passed a law recognizing the New Jersey Big Data Alliance, a consortium of nearly all the state’s top universities and their collective endeavors to confront challenges in dealing with large quantities of digital information.

At the same time that universities across the state have been compelled to work together on research into the promise of managing, transporting and analyzing “Big Data” research, universities in New Jersey also have been encouraged to collaborate on innovation in drone technologies.

The Garden State is home to some of the only sites FAA picked for drone research.

Rutgers and other campuses are at the forefront of prototyping and testing drones as well as teaching students about a future with unmanned aircraft-filled skies.

The state’s biggest research universities — Rutgers, NJIT and Princeton — are not the only ones owning this new expertise, but share an interest with universities such as Rowan, Stockton and Stevens Institute of Technology.

Shreekanth Mandayam, vice president for research at Rowan University and executive director of the school’s South Jersey Technology Park, said there’s no university small or large today that doesn’t have a willingness to collaborate in New Jersey innovation.

“We really have been sharing our resources across the spectrum, which is creating a healthy ecosystem for research here,” Mandayam said. “The fact is, no research university can exist nowadays without strong cooperation with others.”

Under some measures — such as revenue through patent licenses — New Jersey’s largest research school, Rutgers University, outclasses all but a few colleges nationwide.

Yet Christopher Molloy, a leader in the research arm of Rutgers University, said not only is the school “under-marketed” among research universities in the country, but the state itself is.

Molloy, however, believes Gov. Phil Murphy and the current legislators in New Jersey seem willing to “push the strengths of research institutions,” including supporting a movement to revitalize the state’s defunct research-centered Commission on Science & Technology.

“The new governor is helping a great deal,” he said. “I think it’s a breath of fresh air … and an opportunity for the state to reclaim the birthright that was ours as the innovation state.”

When a commercial airliner traveling from Moscow to Cuba ran out of fuel over the Atlantic and needed to make an emergency stop at Atlantic City International Airport earlier this year, a school once scarcely known outside of New Jersey was called for its expertise.

It was Rowan University that offered up the preeminent Russian scholar in the region to help translate for the plane’s 300 passengers for 10 hours as they stocked up on food and medicine.

Shreekanth Mandayam, a leader in the school’s research department, said the situation spoke to the increasing renown of the college, which last year received a Carnegie Classification of Institutions of Higher Education designation that puts it in the echelon of doctoral research universities.

“We’ve gone from a small school in a place no one knew about to, here we are, not just making ourselves known regionally but recognized for expertise on an international level,” he said. “It’s remarkable.”

And just as Rowan University, especially with its nascent research capabilities, is being taken very seriously today, the school’s leaders hope the South Jersey region shares the benefits.

“If you look at any of research institution across the country, they’re a hub of job creation — and so that’s a focus for us here,” Mandayam said. “With being a strong research presence here comes a responsibility to participate in the knowledge commons, engage with residents and offer opportunities.”

Contact Christopher Molloy of Rutgers University at: chris.molloy@rutgers.edu or 848-932-5663.