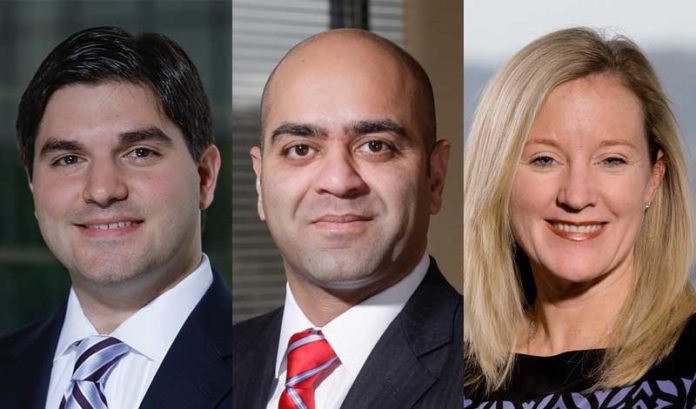 Riker Danzig announced it had formed a cannabis practice group last month for one simple reason: To let everyone know what only a select few knew.

The firm has been practicing in the cannabis area for some time. And, since it had been getting an increasing number of referrals for work, its leaders figured it was time to make a public announcement.

“We were already working in this space,” Jason Navarino said. “So, as things were picking up in this area, it made sense to let the world know that we’re here and we’re already doing this because we have the experience.”

Navarino, a partner in the corporate and tax groups, is one of three heads overseeing the group. He is joined by Zahid Quraishi, a partner in the white collar criminal defense and investigations groups, and Mary Kay Roberts, a partner who heads up government affairs out of Riker’s office in Trenton.

Having three leaders from three different areas is by design — and one of the reasons Riker feels its group has an advantage over others in the space.

“The cannabis law group is really being headed up by three separate practice groups working together for a host of reasons that make sense,” Quraishi said.

“There are different areas that we need to handle in this space. It’s not all about the controlled substance act or what’s a violation of law. There are corporate issues, business issues and (there are) obviously legislative issues that we’re dealing with.”

Navarino said the setup is the norm at Riker.

“That’s how we work at Riker,” he said. “We find it most effective to pull in the practitioners who have the right expertise, rather than each person trying to do everything themselves.

“We pull in the person who knows the criminal statute or bring (in) the expert who knows regulatory matters or the partner who has expertise in corporate tax matters. We find that, by working together, we’re able to deliver the best service.”

The group leaders said that approach may be especially important when dealing with cannabis, since so many potential parts of the industry have yet to be established.

“You go where your clients take you,” Navarino said. “We’re working with a client to establish a private investment fund to make investments in the cannabis space. We’ve got inquiries about entity formation and regulatory issues.

“I think there are certainly other exciting opportunities in the state (from logistics to pharma to intellectual property and trademark).”

And, of course, there are plenty of other issues to be worked out in the Legislature.

How will the decision to expand medicinal use play out? Will the state allow recreational use?

Those are just some of the reasons why Roberts is so integral to the practice group.

“To the extent where we have clients who want to have their voice heard in the Legislature or the Department of Health, as medicinal regulations get worked out or the agency responsible for regulations if recreational gets legalized, we can help provide clients a voice through our lobbying work,” Quraishi said.

These abilities go to why the group made the formal announcement.

“At the end of the day, it was just to let people know what we’re already doing,” Quraishi said. “We were getting clients who were just contacting us based on our experience or former relationships saying, we’re looking to get into this space.

“Now that we’ve marketed that we have a cannabis law group it, and we formed with what we believe are the three groups that are necessary in order to address any of the issues that might come up, we wanted to let clients we don’t have yet to know we’re here and we can handle the business.”

Volunteer Lawyers for Justice ‘floored’ by contribution from Amazon