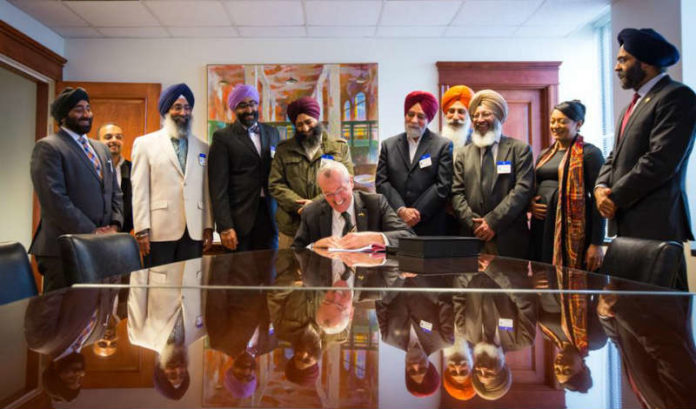 The designation of April as Sikh Awareness Month in New Jersey is just step one in a series of ongoing efforts the Sikh community in the state is taking to ensure the traditionally quiet community is no longer on the receiving end of hate crimes.

Especially since many Sikhs in the state are small business owners, and can be very visible to the public in places like gas stations.

Gov. Phil Murphy signed a bill into law designating April as Sikh Awareness and Appreciation Month on Monday — a move that seems to coincide with the increased political awareness of Sikhs in the state.

In just the last year, New Jersey has seen its first Sikh mayor, Ravinder Bhalla of Hoboken, and the first Sikh state attorney general in the entire country, Gurbir Grewal.

But the origins of the bill trace back to an intern for Assemblyman Lou Greenwald (D-Voorhees) in the summer of 2016 — before the historic rise of the political figures.

Karanveer Pannu, a Rutgers University student and Voorhees resident, was an intern in Greenwald’s office as part of a leadership program.

“When I interned with (Greenwald), he presented me with the opportunity to create five bill ideas, and one of them ended up being this one, because I saw other states passing them, like California, Delaware and Tennessee,” Pannu said.

Once the idea was approved by Greenwald’s legislative aid, Pannu was tasked with doing the research for the bill draft, including getting statistics on the prevalence of Sikhs in New Jersey.

Greenwald approved and began to engage the Sikh community in his district.

“They are a very active constituency group. I’ve gotten to know them as small business leaders as well as people of faith. They were kind enough to invite me out to their temple in October or November of last year … I just have gotten very close to the community,” Greenwald said.

“I sympathize in a time where I think there is too much attention nationally on what separates us, as opposed to what binds us. The plight that they face, the misunderstanding their community faces, after the horrific attacks of September 11 (when Sikhs were erroneously connected with that terrorism). This was something that was important to them and it became important to me.”

Amman Seehra, who is involved with the leadership program that landed Pannu in Greenwald’s office, and co-founder of the ONE Project said the bill passing both houses and being signed by Murphy was a win for the community.

A Sikh and a resident of New Jersey, Seehra understands the need for greater awareness in the state.

“There is a culture of trying to be humble and not talking about what you do in the community,” Seehra said. “The difference between seva (selfless service) and community service is that seva is done without ego and without taking ownership.”

But that is changing as the community, which has had a presence in the country for more than a century, is learning how to shape its story for consumption in the mainstream.

“Inherently, Sikhs don’t talk about the work that they do, and they are not creating their own message of what Sikhism is, and it’s just being derived by other sources and a lot of the times it’s wrong or negative. There is a more conscious push over the last five years to redefine what Sikhism means,” Seehra said.

Though the Sikh community has now received recognition at the state level, Seehra said the local and county level will have more impact.

“New Jersey is very diverse, but if you look at the Southern Poverty Law Center, it has the fourth-most hate groups in the country,” Seehra said. “There’s a big dichotomy of having diversity and having inclusion, and I don’t think we are there yet. Even from my own experiences. I grew up in Hamilton, and a lot of things I went through in school — not being able to play basketball (because of the turban), people not talking to me because I wore a turban — are not just related to my experience, but to every turbaned Sikh in America. Even when I ran for school board three years ago, I had a lot of my neighbors go out and canvass for me, and they couldn’t believe people wouldn’t vote for me because, they would say, ‘I can’t vote for someone with a name like that,’ or, ‘Because he’s Indian he’s going to make the school district harder and more focused on academics.’”

Currently, he and others are working with local and county governments to pass similar resolutions. To date, Middlesex County has passed a resolution, Mercer County, Robbinsville and Monroe Township resolutions are in the works, and Lawrenceville is just starting hearings.

This, Seehra hopes, will help stop the spread of misinformation that permeates into a business environment. Case in point: a businessman in Monroe Township trying to open up a banquet hall last year.

Some residents started spreading rumors that it was really a cover-up for a mosque that would be built inside, Seehra said.

“It exists in our communities today,” Seehra. “Small incidents of hate that people don’t see. People think we are living in a society where racism is the past, but it’s not, it’s our present. The needle doesn’t move until move it in a positive direction.”

The month of April is also significant for Sikhs who celebrate the spring festival Vaisakhi.

Grewal, who along with Seehra was at the bill signing with the governor, said it was an honor to attend.

“I am grateful to the Governor for recognizing not only the valuable contributions of the Sikh community to our state, but also the importance of diversity and inclusion in state government,” Grewal said. “When our government and institutions reflect what our country looks like, it will help increase tolerance and acceptance.”

Budget compromise still working its way through Legislature on Sunday; some...

Restaurant association desperate to resume indoor dining — or even hear...