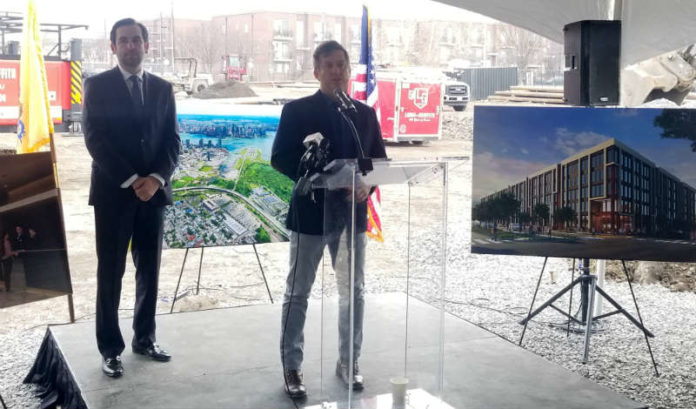 A 15-year-old plan for a mixed-use property adjacent to the Liberty Science Center is coming to fruition in the Lafayette neighborhood of Jersey City.

Located at 100 Monitor St., the five-story luxury rental building will occupy a now-vacant 2.7-acre site, and will include 309 rental units and 3,800 square feet of retail space.

The building will include a new 8,000-square-foot headquarters, rent-free, for the Jersey City Redevelopment Agency.

“We’ve been committed to Jersey City for more than two decades and view Lafayette as an emerging neighborhood with significant growth potential,” said David Barry, president of Ironstate Development Co.

Ironstate has developed the $84 million property in partnership with Brookfield Property Group and Landmark Developers.

“The neighborhood this finds itself in has a lot of character, a lot of historic character,” Barry said. “It’s a mix of industrial and residential.”

City officials said that, amid the city’s ongoing, quick pace of growth, the move into this neighborhood, away from the PATH stations, will help alleviate the burden on Port Authority transportation.

Instead, the attention will be turned to New Jersey Transit’s Hudson-Bergen Light Rail, and ease of access to Interstate 78 for drivers.

Mayor Steve Fulop said the new development is just the latest in the area.

“We recently designated a developer for a boutique hotel with a rooftop restaurant. This year, we are working hand-in-hand with the Governor’s Office to see Jersey Avenue cut through for better access to the (Liberty State) Park and this neighborhood,” he said.

Fulop also pointed to lots nearby on Monitor Street that are also being developed.

“We’ve had some pioneers who started two years ago … they will tell you that the success of this neighborhood has been outstanding. The rental rates or sale rates have been faster than any of their expectations,” he said.

Fulop added that the lot has been perceived as an eyesore but will be, once the building is complete, a catalyst for greater development.

The project will create over 600 construction jobs and take approximately 22 months to complete.