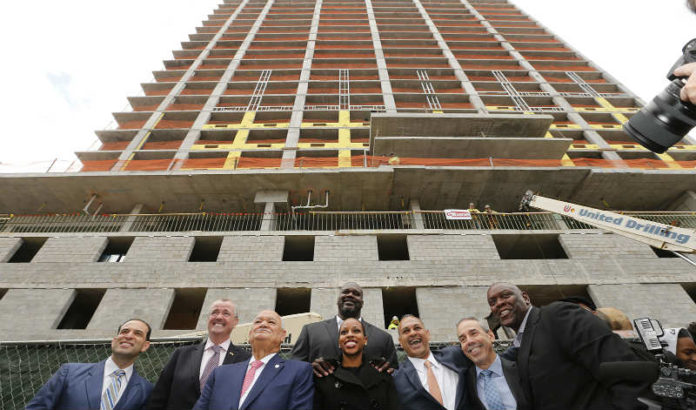 The project, built along the river in the heart of downtown Newark at 37-39 Rector St., is formally called One Rector Street.

But everyone in attendance at the topping off ceremony Tuesday afternoon simply called it “Shaq Towers.”

The project is the latest in Newark by Boraie Development and former NBA superstar Shaquille O’Neal. And the ceremony brought out a host of dignitaries, including O’Neal, Gov. Phil Murphy, Newark Mayor Ras Baraka and developers Wasseem and Omar Boraie.

Wasseem Boraie called it a great day for the city and a modern example of why public and private entities must work together to make progress in urban centers.

“It couldn’t have been done without the city of Newark,” Wasseem Boraie said. “It’s the way we partnered with the city that sets a new tone. Public-private is such an overused term. It usually means private guys do the work and the public pays for it. Under Mayor Baraka, he holds the private sector accountable.

“This project, with Goldman Sachs and our partners, we have to come to the table. And then the city, the state and the EDA, they came in later. And I think, basically, for the rest of what happens in New Jersey, it should really be called private-public, because that’s how you get projects done in this neighborhood now.”

Murphy said the project is yet another milestone and stepping stone for the city.

“This is a pretty special day for Newark and New Jersey, yet another piece of evidence that this city is on the rise, let there be no doubt about it,” he said. “And (Newark) is well off the mat. This is a city that has a trajectory that is undeniable.

“As I said many times as a candidate, in transition and now as governor, in so many respects, as our big urban centers go, first and foremost as Newark goes, so goes the great state of New Jersey.”

O’Neal took the stage last and stole the show.

For him, projects such as these are not so much public and private as they are personal.

“Born and raised here, love this city,” he told the crowd before telling a story.

“In 1992, me and my mother were visiting some relatives and my mother said to me, ‘I remember when this city used to be beautiful. Somebody needs to come by and invest in the city and make it beautiful again.’ And then she gave me that big elbow to the chest, like I’m that somebody.”

O’Neal thanked the city for its efforts, as well as Boraie Development, calling it, “the Kobe Bryant of development.”

“This is a long time coming,” he said. “I just love coming home seeing everybody.”

Construction of the building, under the direction of Gilbane Building Co., will be completed by the end of the year, with pre-leasing starting in October and November, Boraie said. He expects the building will be fully occupied by next summer.

The building is intended to be luxury at affordable prices, Boraie said, drawing from a group of professionals and current city residents looking for a place they can have access to all the city has to offer.

O’Neal told the crowd he may just join the folks here.

“A person just said, ‘We don’t see you around much,’” he told the crowd. “I just want you to know that when this building is done, when you look up, the whole top floor is going to be all me.”

Next for Boraie in Newark: 35-story project

Boraie Development and Shaquille O’Neal announced their next project for the city of Newark on Tuesday afternoon.

The 35-story mixed-use project will be in the heart of the city on McCarter Highway, in the lot surrounded by Ironside Newark (which will anchor Mulberry Commons) and the Gateway Center complex.

The building will have 350 units and represents another $150 million in investment into the city, O’Neal said.

Wasseem Boraie, vice president of Boraie Development, said the company has just started the project and hopes to be going strong in 2019.

Boraie, speaking at the topping-off ceremony for his One Rector Street multiuse project, said he just knows that the time is right to build in Newark.

“And that’s a credit to the mayor (Ras Baraka),” he said. “He’s the person bringing everything together. We’re just happy to be a part of it.”

1st phase of remediation at ‘Cove’ site in Jersey City is...