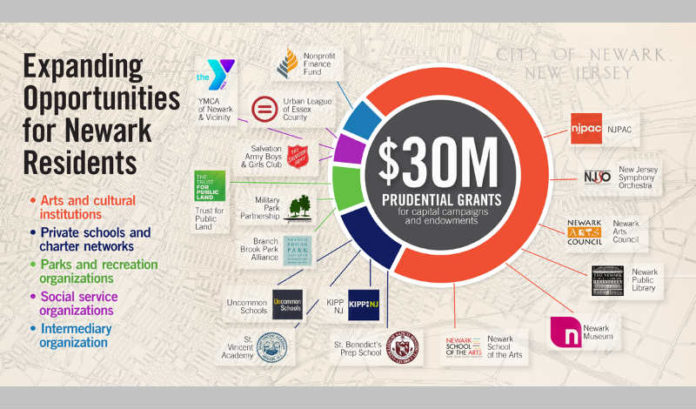 Prudential Financial Inc. is providing Newark nonprofits with $30 million in grants to support capital campaigns and endowments throughout the city’s five wards, it said recently.

The funds will go to 17 beneficiaries, including a community center in Newark’s Fairmount Park, a new synthetic turf field in the Central Ward and arts programs in Clinton Hill.

The following are 16 nonprofits receiving grants in the city:

A 17th grant will be awarded to the Nonprofit Finance Fund to extend the impact of its Newark Resilience Initiative, which helps nonprofit organizations become financially sustainable and improve their ability to withstand economic change.

The Newark Arts Council said it plans to use its grant to nurture local arts and educational creativity at the Fairmount site, as well as expanding its ArtStart program. Trust for Public Land said it plans to use the funds to complete the third phase of its renovation of the Jesse Allen Park in the Central Ward, which will include new synthetic turf.

Since 1976, Prudential has made more than $2.4 billion in impact investments, it said, and nearly $890 million in grants and corporate contributions to nonprofits.

The 17 nonprofits receiving grant monies build on Prudential’s $1 billion commitment to Newark the company has provided over the past decade.

In the last decade, Prudential has committed to Newark:

These contributions helped impact some of the biggest developments in the city, including the Prudential Tower, Military Park, the Hahne & Co. redevelopment, Georgia King Village, NJPAC, AeroFarms and Teachers Village.

Over the last 10 years, Newark has undergone major revitalization efforts to create a walkable city with access to quality jobs and education, Prudential said.

However, there are still challenges beyond the downtown corridor, it said.

According to a 2015 Nonprofit Financial Fund survey, nearly two-thirds of Newark nonprofits have less than three months of cash in reserve.

Reddy said the $30 million in grants recognizes the vital partnerships Prudential has with many community-based organizations.

“This support will strengthen their infrastructure and capacity to better serve Newark’s residents today and tomorrow,” she said.