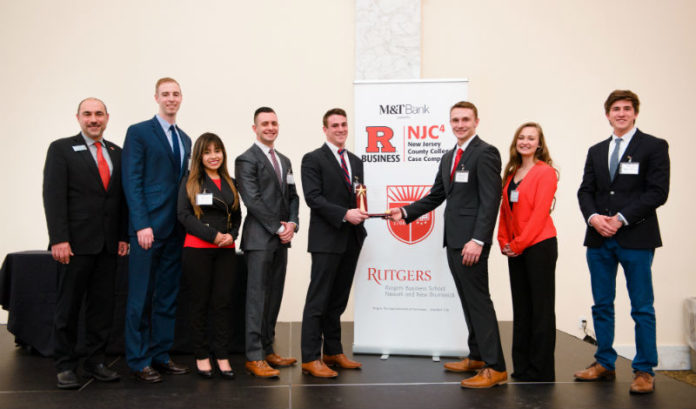 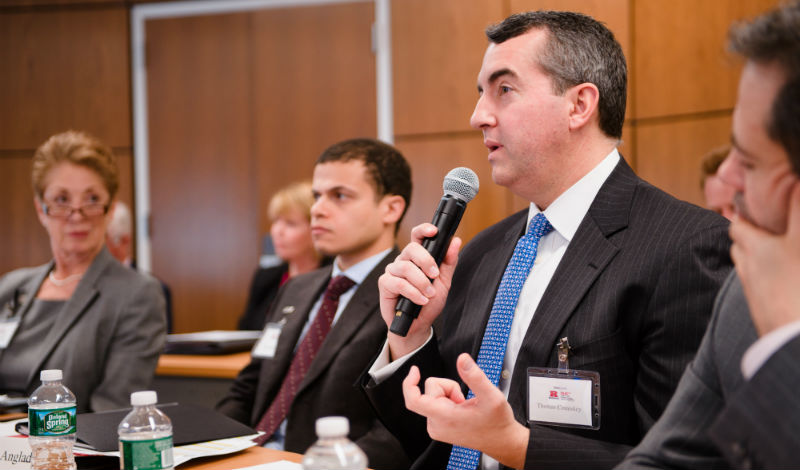 The questions came fast and furious. And, while they were soft in tone, they were tough in content.

“Who are the franchisees who are going to take this kind of risk?”

“Where is the technology spend in your forecast?”

“If you are having problems with your public image now, why are you waiting a year to start your public relations campaign?”

Seven teams of students from community colleges across the state had to present a five-year business plan for Keurig Green Mountain — and to do so under the assumptions that the company’s popular K-Cup package was a year away from losing its patent and that the company was under fire from environmentalists because its product was not easily recyclable.

The groups had been preparing since January, and many had outlasted others at their own schools to get to this point: a 20-minute presentation to six business leaders.

Then they had to face 10 to 15 minutes of questions.

Tom Comiskey, regional president of M&T Bank for New Jersey, said the event can be tough and stressful but is a win-win-win for the bank, Rutgers and the students participating.

It’s why M&T is not only a sponsor, he said, but also an adviser to the teams, assigning a bank employee to each school, helping them prepare for the competition.

“This ties in perfectly with our efforts to give back to the community,” he said. “To be able to help students get real-time experience for what they are going to face in the business world when they get out of school is a great feeling.

“And it’s incredible to watch the students present their business plans in a very clean and efficient manner — far superior than what you would expect from someone of their age.

“These are undergrads, 18- and 19-year-olds. These are not MBA candidates, they just seem like they are.”

The students, who got the case for the competition at the beginning of January, said the experience was worth it.

“We learned a lot,” Megan Connor, a second-year student at Mercer County Community College from Princeton, said. “We not only learned what a business case would look like, but how in depth we would have to get to prepare.”

Her colleague, Michael Whelan, a second-year student from Bordentown, said the team didn’t mind the tough questions. He said they prepared for them — and that it was all a part of preparation for entering the business world.

“The problem-solving techniques we learned — especially in a team setting — will help to translate to any job in the future,” he said.

Comiskey said that was the goal.

It was the reason teams were not only grilled about the financials and the marketing parts of their plans, but the basic feasibility of them. No one got a pass on anything.

“Help me understand this,” is the way many of the questions started.

“We believe, in order to make this experience worthwhile to the students, we have to really treat as if we are asking questions about a real business situation.”

The participants on the winning teams earned a cash award ($500 each for first place, $400 for second place and $300 for third).

In addition, they all earn a $1,000 scholarship, should they choose to continue their education at the Rutgers Business School.

Rutgers University officials said seven participants in the first two years of the competition have chosen to continue at Rutgers.

And Rutgers may not be the last stop for some involved.

Comiskey said the bank hired one of the students from last year’s competition as a summer intern. And he indicated there may be more down the road.

“I’ll be honest, I’m looking at these presentations and I’m making mental notes: Who would we want to hire one day?” he said.