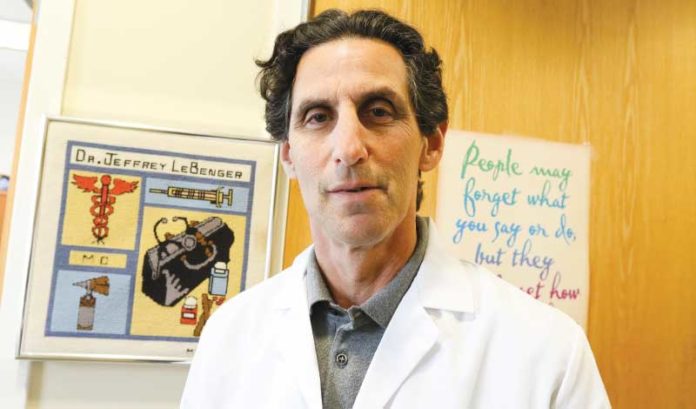 Summit Medical Group is on its way to surpassing 900 physicians in its multispecialty organization by the end of this year, keeping it in the lead as the state’s largest independent physician group.

Dr. Jeffrey LeBenger, chairman and CEO of SMG and CEO and president of Summit Health Management, believes the ongoing consolidation of physicians nationally will prepare the health care industry to save on overall spend.

Especially as hospitals change their strategies to focus more on lower-cost care.

“Pulling out of the hospital immediately is almost impossible, plus we don’t want to pull out everything, because we want them to have a margin and make a profit. Volume is what’s going to save the institutions. For us, it’s all in the outpatient venue. We move hospital stays into a subacute stay, decreasing that high-cost visit to a lower cost point. It’s much easier for us to do that. Hospitals find it almost impossible, because it will destroy the economics if they do that. But they are moving in that direction, which is great for the entire community.”

To that point, some of the physician consolidation in the state to-date has been to hospitals, which employ thousands of physicians now. Meanwhile, others seek looser affiliations with hospitals or physician management companies to help with the administrative costs — a key driver that has pressured doctors to consolidate.

“So, why do doctors look for moving to consolidation?” LeBenger asked. “Because of all the IT demands, all the costs in their practice, which goes up 5-7 percent a year, and they have to do all this government regulation on quality.

“They can’t make a living on the outside.”

LeBenger spoke with ROI-NJ about his experience with growing the practice and the expansion of Summit into a national brand.

ROI-NJ: How have you managed to continue to grow, with so many other options for doctors in the area?

Jeffrey LeBenger: We have about a 1 percent turnover rate, besides those who retire. That shows me, and I think what it shows our organization, is that we have a transparency of trust within the organization. It has to do with the leadership of the board and our clinical council. Doctors have an understanding that we are here for the patient, and we look out for the providers.

ROI: Tell me about the management company. You began it to help with interoperability and giving doctors a back-end support system. How is it coming along, and are you licensing the capabilities to non-Summit doctors as a source of revenue?

JL: We started with 250 providers, now we’re going to be 900 with a modest increase in the management model, because we overcompensated initially on our management company because we wanted to get it right. So, when we expanded into the country and went to Bend, Oregon, and to Phoenix, we have to increase our management services. But we already have our processes in place to scale to those markets.

ROI: How is it going out West?

JL: Bend is already doing well; they had some financial issues when we took them because of an Epic implantation. But now, they are doing great, they are in the black, and ecstatic because our culture is very similar to their culture. Now, Oregon, they are a little friendlier out in Oregon than in New Jersey, but the culture is similar.

As of now, we are not selling the service to individual physicians. Although we are one of the few licensed organized delivery systems, which is called Summit Select, which is our risk-bearing entity. So, we have the ability to create a network in New Jersey and we are looking into that.

ROI: What are your thoughts on the ongoing consolidation in the physician world?

JL: Consolidation has happened for a number of reasons. First, physicians, unfortunately, have always been the brunt of the payors, always. Their reimbursement, as an individual doctor or even a small group, has been awful. I don’t think it’s fair that, I know for instance … if you do a tonsillectomy, you have to talk to a parent, see the patient two to three times before surgery, you have the surgery, and you talk to the patient and the parent one time after that and multiple phone calls after — the average reimbursement for a tonsillectomy, which is a high-risk procedure, in New Jersey, in commercial and Medicare if you blend it, is going to be about $175. That’s nothing.

Think about going to a mechanic to change your oil in a car and do things in car, it’s no less than $200. This is a doctor who graduated from a residency program at age 30-31, probably owes about $200,000 in debt and made $25,000 or $30,000 during residency and is already behind the eight ball by 10 years, compared to the private sector, of making an income. So, unfortunately, they have to churn, their quality goes down, because these doctors — and I’m not saying it’s a bad living — can earn $120,000 or $140,000 for all that time they put in. So, what they look for is a large organization that can protect them salary-wise.

A doctor becomes a doctor because he’s altruistic and empathetic and did well in science and he wants to take care of patients. But there’s the economics, because you have to turn on the lights and fire up the gas — you have to do things in your organization — and you want to make a fair living.  No one is asking for an exceptional living.

ROI: Consolidation in the hospital industry has been going on for some time, and many say the larger entities are not affordable. Isn’t that a danger for Summit, too?

JL: The group is a behemoth. We are going to continue to grow in northern New Jersey. We only see about 10 percent of the population in northern New Jersey. There is room for us to grow. So, when other groups come together, it depends how. There is good and bad in every assimilation. For us, we come together because we standardize health care and quality for patients in area.

Yes, volume does matter, because when you increase your volume or (add) patients to the organization, then if you can create savings in that population, yes, there is an economic favor for that. For instance, we beat the market by greater than 8 percent. When we beat the market, we economically save on those dollars, but share that savings with the payor who goes back to the employer and lowers premium or allows them to readjust premium, so it doesn’t go as high.

ROI: What do you have to say to those who are of the opinion that Summit is plateauing?

JL: We see 600,000 unique patients a year. There are 6 million people living in northern New Jersey. So, that’s 10 percent of the population. There is much more room to grow. There’s a lot of consolidation in the area. There’s Hackensack Meridian, there’s RWJBarnabas, there’s Atlantic Health. So, I still think there is a vast market to grow out there, and that patients would like to come in and see our model of health care. It’s a different model when you are run by a hospital than an ambulatory setting.

ROI: It seems there is little participation from physicians in the political sphere. As a large entity, do you feel a need to stand up and be heard in Trenton?

JL: I’ve reached out multiple times for that. But the hospital market is much more dominant than us. We try to be apolitical, as a group. We try to be neutral to all parties. But I have reached out to the current administration to see how we could help demonstrate how to help save the health care dollar. We are here to help in any way we can.