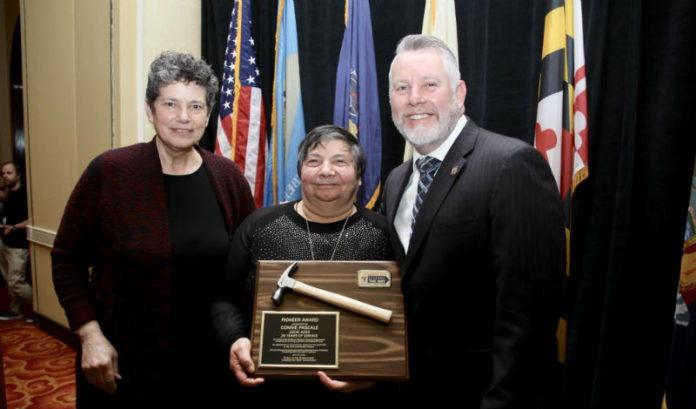 In an effort to increase female participation in the union, the Northeast Regional Council of Carpenters hosted its first Sisters in the Brotherhood “Leading the Way” conference from Friday to Sunday, bringing together more than 300 current and retired women carpenters, elected officials and local businesses and organizations to connect and honor 14 “Pioneer Sisters,” female union carpenters who have spent more than 20 years on the job paving the way for other aspiring tradeswomen.

“This historic conference was a wonderful opportunity for our sisters to network, learn from one another and honor Pioneer Sisters who paved the way in the construction industry,” John Ballantyne, executive secretary-treasurer of the NRCC, said. “The Pioneer Sisters honored this weekend are true trailblazers. They have helped set the path for women to enter our trade and we thank them for their contributions to our Union carpentry trade. We hope that this conference provided a platform for tradeswomen to learn, network and grow professionally.”

“Our Sisters in the Brotherhood program has seen great success in the recruitment and retention of skilled women who make enormous contributions to our union carpentry trade,” Susan Schultz, chair of the SIB program and NRCC representative, said. “This past weekend was a wonderful event and I’m so proud to have recognized the Pioneer Sisters who have shaped our union over the years for the better and have given other women the chance to do the same for future generations.”

According to Tony Bianchini, director of communications for the NRCC, the organization was tasked with creating a pilot program for SIB nearly five years ago to help raise the number of registered women apprentices.

“Our leader, John Ballantyne, strongly believes that our locals need to be made up of local people building local projects, regardless of gender, ethnicity, religion, etc.,” Bianchini said. “This conference was about thanking our Pioneer Sisters for their service and speaking with current women carpenters about being ambassadors and spreading the word that a career in carpentry is right for women.

“We say jobs don’t have a gender, and that is true. We want to get whomever is interested in a career in carpentry involved.”

In New Jersey, Bianchini added, the number of pre-apprenticed women carpenters has risen to nearly 9 percent since the beginning of the program.

“The pilot program we created with SIB was to ensure that women who were interested in carpentry received four to six weeks of physical and basic skills training to learn more about the industry and gauge their interest in moving into formal apprenticeship training,” Bianchini said.

The “Leading the Way” conference was held at the new 100,000-square-foot training center in Edison, which the NRCC opened this month to train younger generations in carpentry via a free, five-year program.

“This is a free education, especially for younger generations who are being pushed toward four-year colleges only to graduate with debt,” Bianchini said. “Here, you not only receive a five-year education with the union, but you also get paid during your education while learning both in the classroom and on the job and graduate with the ability to receive good wages, full health care benefits, a pension and more.

“We’re training our students to make sure that they have the skills necessary to safely and effectively build the infrastructure throughout our region before being able to retire with money at a good, healthy age.”

With the current median age of carpenters hovering in the low 50s, Bianchini said this conference was particularly designed to recruit younger women into the industry.

Workshop and panel topics therefore included: transitioning from corporate to construction; creating a career pathway from apprenticeship; leveraging technology; union activism; social media training; and more. It also included a vendor expo, a tour of the new training center and an awards ceremony for the 14 Pioneer Sisters.

Pascale, a former seamstress, said she joined the union in 1991 out of necessity, learning the trade from her husband after he grew too ill to work.

“Though I often was one of the only women on a job site, I learned that I liked to do the job,” she said.

(READ MORE from ROI-NJ on the new facility in Edison.)

The job helped her to better support her late husband and three sons with better health and retirement benefits, Pascale said.

“Most of the time, I would work eight hours, but often times, I was able to work overtime, with 25 hours being the most I had ever worked at once,” she said.

“I am proud to be a woman carpenter and am proud that I was able to do this job,” she said.

The NRCC represents nearly 38,000 men and women in New Jersey, New York, Pennsylvania, Delaware and Maryland, as one of the largest trade unions on the East Coast.

The mission of the NRCC’s Sisters in the Brotherhood program is to create a network of active, female union carpenters who promote the values of leadership, mentorship, strength and unity within the labor movement.

As part of the United Brotherhood of Carpenters and Joiners of America, one of North America’s largest building trade unions with more than 500,000 members, Sisters in the Brotherhood supports female members by providing assistance in obtaining craft training and leadership skills; by being advocates on women’s issues; and by mentoring new and potential members.