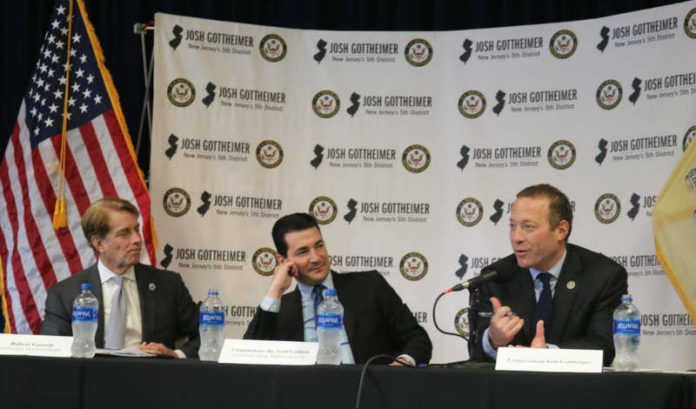 Food & Drug Administration Commissioner Scott Gottlieb led a roundtable with U.S. Rep. Josh Gottheimer on Monday at Hackensack University Medical Center that focused on the needs of the health provider and pharmaceutical industries.

The event included attendees from the likes of Teva, Eagle Pharmaceuticals, Bristol-Myers Squibb, Johnson & Johnson, Bayer, Allergan, Novartis, Stryker and Becton Dickinson, and organizations like BioNJ and the HealthCare Institute of New Jersey.

The roundtable was closed to the media, but, after Gottlieb left, reporters were allowed in to speak the remaining attendees.

Robert Garrett, co-CEO of Hackensack Meridian Health, said the roundtable was a good opportunity for industry leaders to hear firsthand from the commissioner.

“In particular, we talked about safe expediting of products and devices and drugs through the approval process. We touched on generic drugs and the FDA’s role and leadership in making sure consumers have adequate choices in access to generic drugs. We talked a little bit about the FDA’s initiatives with respect to tobacco use and some of the regulations they are working on in those areas,” he said.

In fact, when Garrett first met Gottlieb in Davos, Switzerland, last year, he recalls the topic being tobacco use.

“He was very direct. He talked about tobacco use as a real health risk,” Garrett said. “I think he was a real eye-opener for our colleagues in Europe and Asia, because they didn’t have that as even a health priority. I loved his directness. I think he represented the FDA well, he represented the United States very well at that forum.”

Another area of focus for Gottlieb, according to Garrett, is new technologies in treatment.

“(The FDA) was traditionally set up as an approval agency for drugs, but now there’s all these technologies and products and devices that are intrinsic in getting these technologies to market — and he’s aware of it,” Garrett said. “And Europe and Asia, their FDAs have really been on top of this, and this commissioner really gets that.”

This is, of course, of interest to Hackensack Meridian, which, through Dr. Andrew Pecora, has been focused on developing treatment systems in-house and supporting startups that could result in newer technologies.

But that means the health system could find itself in a similar situation as many of the drug companies that were sitting in the room Monday: selling products that are priced too high for consumers to afford, and payors unwilling to foot the bill.

On both fronts, Garrett said, Hackensack Meridian feels confident it can succeed.

“We have to improve clinical outcomes and reduce total cost of care,” he said. “If something dramatically improves clinical outcomes, even if it costs a lot, it may in total cost of care cost less. So, payors should pay for it. On the other hand, if something comes out and it doesn’t make outcomes that much better, and it costs a fortune, payors shouldn’t pay for it anymore. That’s going to be the art of this.”

So, the burden is on the companies to prove that a drug that costs hundreds of thousands of dollars will help offset double or triple that amount over a person’s lifetime.

Another factor in the pricing issue is the cost of the clinical trial process, a point that was addressed at the roundtable as well.

(READ MORE from ROI-NJ on the Hackensack roundtable.)

And time is one of the costliest factors.

On the topic of payors then reimbursing for the drugs, Paula Rinaldi, from Novartis Pharmaceuticals, said one of the biggest problems has been getting paid for these drugs.

Garrett told ROI-NJ he and Pecora have had discussions with Horizon Blue Cross Blue Shield of New Jersey and other payors and they appear interested in supporting a pilot program from any of the products that result from the health system’s startup arm.

“The one group that might have been missing today was insurers. I found Horizon, as an example, to be very open to doing pilots — whether it’s in bundles of care, whether in terms of transforming how health care is delivered or even in terms of being open to these new technologies,” Garrett said. “I can say that I think they appear very open to hearing about it and embracing these technologies. I think it has to be a partnership.”

Why domestic violence increases in January — and ways to help...

Horizon’s big move is credit to Conlin: This is part of...