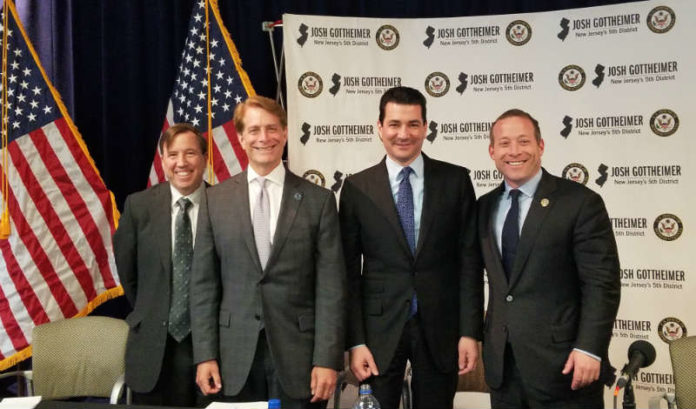 Despite the recent call for usage expansion from state Health Commissioner Shereef Elnahal, hospitals in the state find themselves caught in the middle of state versus federal regulations.

There are no rules that dictate how a hospital should handle medical marijuana — including storage or administration — for patients who are admitted.

The event included attendees from the provider and pharmaceutical sectors, with representatives from companies such as Teva, Eagle Pharmaceuticals, Bristol-Myers Squibb, Johnson & Johnson, Bayer, Allergan, Novartis, Stryker and Becton Dickinson, as well as officials from BioNJ and the HealthCare Institute of New Jersey.

Since marijuana is still a controlled substance according to federal regulations, and hospitals are recipients of federal funding through grants and Medicare, there is confusion over the legality of allowing patients to utilize medical marijuana on hospital property.

So, when a hospital admits patients who bring cannabis with them, a number of concerns arise, including that:

In addition, there is uncertainty about whether or not the staff can allow the patient to take a dose.

Elnahal told ROI-NJ on Monday that the situation is something he is aware of and that needs to be addressed.

“For other drugs, patients are sometimes allowed to bring their own bottles and prescriptions, and I’ve been on care teams where we let the patient take their own medication,” he said. “It’s not recommended, because it’s hard to reconcile that with the active medication list.

(READ MORE from ROI-NJ on the Hackensack roundtable.)

“You just have to document that you’re taking it, and not ask the nurse to give it. Which is a little bit disruptive. But what we might do is have a system like that.”

But that leads to another set of questions.

Can that be done via regulation or legislation in the state?

And if something is passed in the state, will it clash with the federal regulations?

If not, Elnahal said, he would have to reach out to the federal level to work on regulations at that level.

“It’s something we really have to address,” he said. “Because if more and more folks are going to be on it at all ages, and you’ll get folks that are frequently admitted to the hospital who take it, so it’s something we have to find a solution or policy for.”