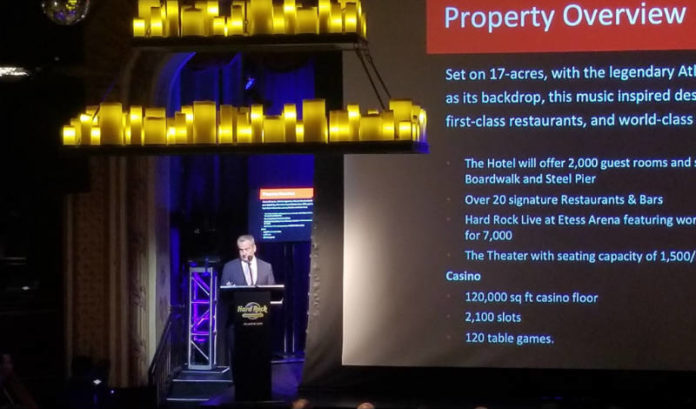 Hard Rock Hotel & Casino Atlantic City continues to be bullish about its opening in the resort town, with an opening day slated for June 28.

Hard Rock International Chairman Jim Allen announced details of the new building, which has replaced the shuttered Trump Taj Mahal on the Atlantic City Boardwalk, just across from the Steel Pier.

“You won’t see any minarets,” Allen said at a media event Wednesday in New York. “Everything has been redone.”

Inspiration was clearly drawn from the success of Borgata and Harrah’s Resort Atlantic City, both of which have maintained strong gaming revenue numbers over the years.

Allen pointed to the contemporary façade and stone flooring — a change from carpeting that has been a staple in Atlantic City casinos over the years.

But the two marina casinos are also a key factor in Hard Rock’s anticipation of the success — over time — of its newest location.

Allen said the fact that both have seen growth in revenue over the years is a clear indication of the potential for Hard Rock.

Jack Morris, CEO and president of Edgewood Properties, told ROI-NJ that, despite the consolidation in 2014 in Atlantic City, gaming revenue continues to increase for some casinos, and that tells a story.

“I think if you look at the numbers, as Jim pointed out, they anticipated that, at this time, there would be under $2 billion of casino revenue, and it’s now $2.7 billion,” Morris said. “So, clearly, whoever is coming up with the statistics (is) wrong. And it grew 22.5 percent without (Hard Rock), so that tells a story within itself.”

Adding the brand — and three Jersey boys developing the project — is also a key to working with the community on ensuring success at the local and state level.

“You have Jim Allen, the Jingolis and myself — that’s never happened before,” Morris said. “People are rooting for you, because people root for the underdogs. We came in when nobody else wanted to come in and we took a risk, and you combined all those together and you have a huge success.”

In addition, the entrance of the Hard Rock brand into Atlantic City has set a new bar for the industry.

“I think we started an arms race in Atlantic City both in entertainment, the property and also your employees — how you treat them and how you pay them,” Morris said. “That’s going to be a very important part of the city.”

Joe Jingoli, CEO of Joseph Jingoli & Son, said the newness of the Atlantic City location will draw from the crowds that want the Hard Rock experience, but may be familiar with their local offering.

“People now have had an opportunity to visit those properties, and I think those properties have leveled off,” Jingoli said. “People will now see what we are building in Atlantic City. There’s going to be no contest.”

The team fielded a number of questions during the media event about the reputation of Atlantic City and the potential to succeed in a town that has been through an extended recession, forcing it to turn embrace nongaming sources as a business growth strategy.

Allen addressed the failures of shuttered casinos such as Revel and stressed Hard Rock’s ability to stay fully capitalized and invest in the property.

The strategy for Hard Rock in Atlantic City is a combination of slow and steady, and engaging the local community, Allen said.

“We don’t want to create an environment that we have to do Borgata numbers on Day One,” he said. “We think the ramp-up of this business of the first three years is the right strategic approach.

“If we are only focused on driving revenue, we will lose some of the core values we have been talking about here today. But, certainly, the facility needs to generate a minimum of $300 to $350 million in revenue.”

(READ MORE from ROI-NJ on who’s playing the Hard Rock this year.)

As for engaging the community, Allen said that, beyond committing to hire locally, Hard Rock is relying on residents to help identify problems, and it will not be afraid to call the police if it sees drug dealers hanging around the corner.

In addition, Allen said, Atlantic City’s Boardwalk is very safe, thanks to a surveillance system of cameras that has been installed in recent years, and the weekends are often fully booked. Both are things that are not often touted about the city, he said.

“We want to do that collectively with the mayor, the city council, with the government and obviously with the chief of police and public servants,” Allen said.

The 7,000-capacity Etess Arena already has 50 shows booked, starting July 1, and plans to ramp up to 300 shows per year, according to Allen.

There will also be a beach bar in the summer, but it will only be a Phase 1, Allen said. And there will be outdoor eating and seating following the recent passing of a city ordinance.

“We have found that making sure you have the amenities for the individual segments of the marketplace — whether you are a $100 slot customer or a $10 billion table games customer, or if you’re an international customer, whether it be from Asia or wherever that may be — we’ve truly designed an entertainment and beverage and an actual gaming space with the amenities that are respectful to their cultures,” Allen said.

“Hard Rock is not just about rock ’n’ roll. We go through all genres of music on an annual basis, and that is something that is very important to us. It’s not just about get in, get a buffet, spend $50 on the slot machine and go home. That’s not who we are.”