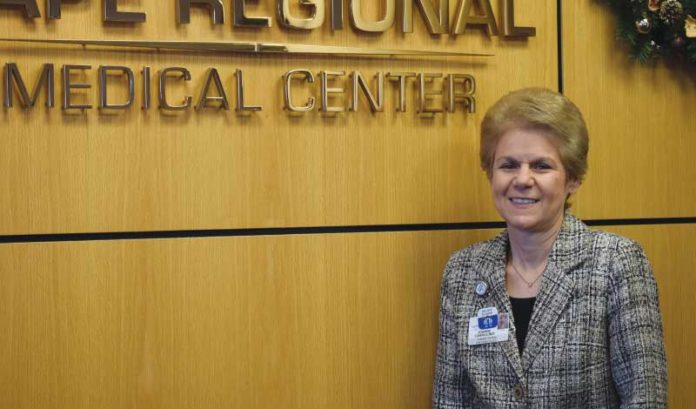 For some, the health care landscape is changing at an unprecedented rate.

For Cape Regional Health System, adapting to sudden changes is part of the routine.

As hospital consolidation within the state is reaching its peak, with few moves left for larger players, the remaining independent hospitals are working on strategies to ensure a strong financial future.

While Cape Regional, which consists of more than 30 locations, including one hospital — Cape Regional Medical Center — has followed the trend of creating strategic partnerships in certain service areas, it faces a unique annual challenge.

Located in the heart of summer beach homeowners and seasonal businesses in South Jersey, Cape Regional serves a regular year-round population of 70,000. But for 10 weeks every year, it serves at least 700,000, according to CEO Joanne Carrocino.

“It’s a challenge, but we have it down pat where we flex up with about 100 staff every summer,” she said. “Many come back here year after year because they want to spend the summer at the Shore.”

Despite this ebb and flow of volume, the system is thriving — and growing. The system opened two urgent care centers just last year and continues to have a comfortable profit margin, Carrocino said.

The key to success has been multi-fold, but since taking over in 2004, Carrocino has focused on partnerships and providing care outside the hospital.

“The whole shift has been to outpatient,” she said.

It’s part of the ongoing trend in health care — delivering care outside the walls of the hospital and focusing on greater preventative and primary care.

“In order to survive in this day and age in health care, you have to shift to ambulatory care,” Carrocino said. “We continue to grow and expand, to continue to serve this community. And continue to be focused on wellness prevention while serving the needs of our inpatient care. That’s been the secret of our success.”

As for being independent?

“We like being an independent hospital,” Carrocino said. “We like serving our community. We like that our board is 100 percent from Cape May County — well, one is from Atlantic County.”

Carrocino shared some of her experiences in almost 15 years at the helm, and her outlook for Cape Regional.

ROI-NJ: Where do the regular summer staff come from?

Joanne Carrocino: We bring in nurses, nurse aids and ER techs. We train the ER techs ourselves, and many will come back year after year. Many are nursing students or medical students, and its just phenomenal exposure in health care. They aren’t taking care of patients, they are assisting.

ROI: Has the need to adapt to consistently drastic changes in volume at the hospital helped you adapt to the changes in the industry?

JC: You need to stay flexible. Long-term planning used to be three to five years, it’s a year now — the most. Because it’s changing so rapidly. It could change tomorrow. You have got to be nimble and flexible. And that’s what’s nice about being part of an independent hospital. We report directly to the board, a board that lives in our community and knows our community, and we have to remain very nimble and flexible and take advantage of opportunities as they arise. We don’t have months to study things.

ROI: What changes have you made to weather the downward pressure on the industry?

JC: It certainly has been a challenge. We are growing the outpatient side as the inpatient side is shrinking, and procedures we used to do inpatient are now outpatient. Its growth of specialties, diabetes center and our urgent care — because some of those diagnoses are no longer reimbursed (in the hospital) — and the ER. The volume in the summer went up so much, we had to, rather than building a very expensive addition to the hospital, we saw urgent care coming around the corner and went in that direction. We now have three. So, we are really trying to shift to a lower cost setting. We continue to transition and evolve to stay competitive in this environment.

ROI: It’s surprising you have as much competition, considering you’re the only game in town. How have you handled this competition, and what has it been like?

JC: AtlantiCare built a $20 million ambulatory care center right across the street. They tried to buy up a lot of our physician practices. Cooper is another one, Virtua is big now. In our market, you see a lot of the Philadelphia advertising here, the (Jefferson Health’s) and Penn’s, and Foxchase also. Every system in New Jersey and Pennsylvania has asked us to merge with them. They see a great opportunity in us because of our low debt, and its run well. If the board decided to merge with someone, that we didn’t want to or couldn’t stay independent, we would have at least a dozen health systems to choose from.

ROI: Why is there advertising from Philadelphia?

JC: There is no longer Channel 40 (former NBC affiliate in Atlantic County which went off air in 2014). We are in the Philadelphia market, so it makes it challenging.

ROI: And you have partnered with Penn Medicine, so you do have some link to it. On your own, Cape doesn’t have the brand recognition that some other independents in the state do, does the Penn affiliation help?

JC: It does. I think a lot of people that have vacationed here have followed our transformation over the years — we were under another name before — and have recognized we are thriving and doing well. And if we are still independent in this environment then we have to be doing something right.

ROI: So why haven’t you built any additions to the hospital, since that is the trend among other independents and larger systems?

JC: We have run the hospital very conservatively. We have not spent a lot of money on bricks and mortar here at the hospital because we saw the future as outpatient. Access to capital is a key driving to forcing hospitals to join systems, we’ve managed very conservatively and kept our debt low. We have built several outpatient facilities. When you see a new hospital tower go up, it’s typically $150 million to $200 million. We haven’t done that. We renovated all rooms in the hospital — we spent maybe $2 million renovating every patient room.

ROI: How have you found the funding to invest in the expansion without going out to the bond market?

JC: We have a great foundation. This is truly a community hospital, and we have some very generous people in our community. Whether it’s the grateful patient giving us $25 every year, or the patient that eventually leaves us in her estate. We opened a state-of-the-art women’s center, the Jane Osborne center. Jane was a very grateful patient that was treated here three times over 20 years for breast cancer. When she died of natural causes at the age of 87, she left us in her estate, and left us $2.7 million. We have great benefactors like the Brodesser family. We have the Brodesser cancer center. So, fundraising is very important to keep that debt low. We are on a strict diet of capital. It’s the bricks and mortar that kill hospitals, hospitals are expensive. We’ve grown from two to 31 locations (in 13 years). We don’t own all of them, but those buildings are much more cost effective.

ROI: And you’ve still been able to grow the revenue?

JC: Yes, very nicely over the years. I’ve worked for big systems before. I know how they operate. They are very bottom-line driven. Many distressed hospitals have joined systems. The finances are a challenge but as long as we can break even, make a small profit, as long as we can serve the community, we will continue to be independent. We do talk to other players, we’re not in a bubble here. Eighty-five percent of the hospitals in New Jersey are part of big systems. Others remaining are big hospitals. We’re the little engine that could down here, we are definitely bucking the trend.