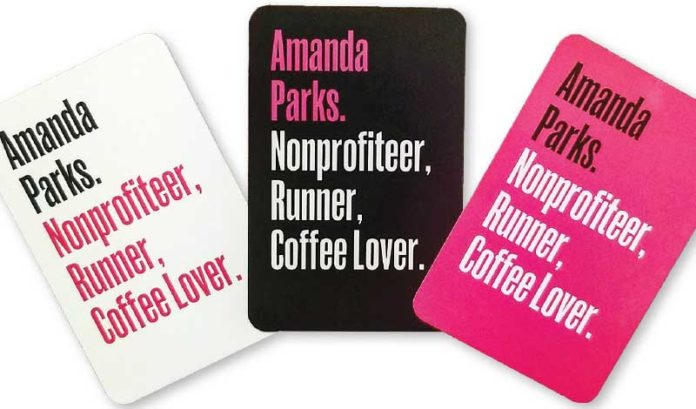 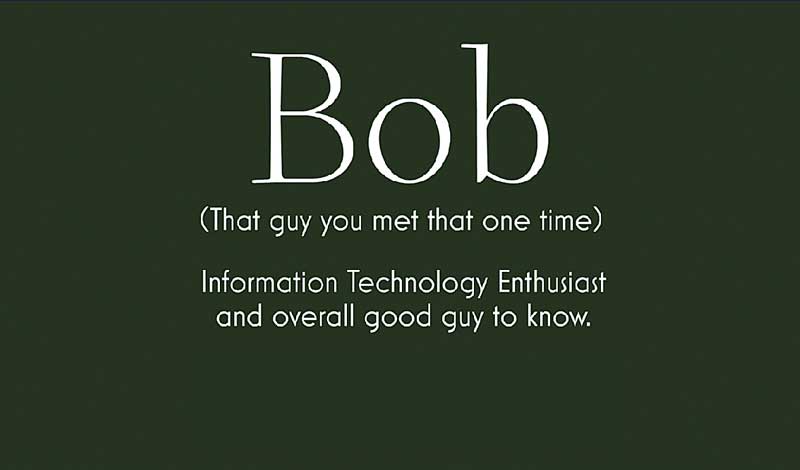 Mallory Visser, Parks’ fellow board member at the Young Nonprofit Professionals Network of New Jersey, included a quote on the back of hers:

“Thine in the Bonds of Womanhood.”

Both Parks and Visser said their clever, minimalist business cards are meant to express more of who they are rather than what they do.

“The information is just vague enough for those whom I meet to remember who I am, but also encourages them to call and continue the conversation,” Visser said.

“I find that I get more of a reaction and more follow-up from the people that I meet simply because these cards, which stand out against the standard, make people stop and think for a second,” Parks said.

This trend, ROI-NJ speculates, may be the beginning of the end for traditional business cards and the introduction of innovative calling cards for those working to live rather than living to work.

Upon graduating in 2014 from The College of New Jersey with a bachelor’s degree in sociology, Parks began working as a community development manager for the American Cancer Society.

“I always have been drawn to volunteering and have thrived working within the creative and mission-driven nonprofit sector,” she said.

Parks said she meets with and manages volunteers and sponsors spanning from Mercer County to Cape May County for fundraising events such as Relay for Life and Making Strides Against Breast Cancer. She also said she volunteers with She’s the First, raising awareness about global gender inequalities on college campuses, while also serving as board co-chair for YNPN-NJ.

She now works as a program associate for the Morris Family Justice Center, a domestic violence agency in Morris County, facilitating intakes and making sure that the children’s program hits all its annual objectives.

“I always have been interested in how the brain and body processes trauma, especially having grown up in northern New Jersey in the wake of the terrorist attacks on September 11th,” Visser said. “Then, as I grew up, I began focusing my work on women’s issues, such as violence against women.

“I now try to focus any volunteer work or career opportunities around the betterment of women and children.”

Both Parks and Visser have company-issued business cards for their full-time jobs and with YNPN-NJ.

“But I was going to networking events and conferences that didn’t really require me to wear either hat,” Parks said. “I wanted to leave people who I had met with an explanation of who I am.

“I always am looking for new volunteer opportunities and causes to support and I wanted to be able to give them a card that identified myself in the best ways.”

Parks said she therefore created and purchased her own business cards in November on Moo.com, a Rhode Island-based printer of business cards, stationary and promotional materials popular amongst younger generations for its innovative designs, shapes and materials.

Parks included her phone number and email address, her Twitter handle, and her personal website. Then she got creative and personal.

“I work in the nonprofit sector; I am a board co-chair for a nonprofit organization; and two of my favorite things that keep me sane through all of that are running and coffee,” she said. “I love seeking out new coffee shops, seeing how they brew different beans, and I also am part of a running group in South Jersey, Run856, that is based out of The Running Company in Haddonfield.

“Nonprofiteer. Runner. Coffee Lover. Those words describe me to a tee.”

Visser said she wanted the cards she also purchased from Moo.com to represent ‘everything’ she does in her jam-packed schedule.

“I needed cards that could speak to several facets of my life and multiple organizations,” she said. “I also couldn’t create ten different business cards on a nonprofit budget, so I needed them to hit the things I most often talk about when I network.”

For Visser, that included her phone number and email address, as well as two website links for organizations in which she is involved.

“Project HEAL is a nationwide organization that helps those suffering with eating disorders pay for treatment, and YNPN-NJ helps me network statewide,” she said.

Then, of course, there’s the quote: “Thine in the Bonds of Womanhood.”

“This quote also speaks to my involvement in political advocacy without being overwhelming,” she said. “Those who take my business card can understand where I am coming from and my point of view without me having to print my political affiliation.”

That’s not to say that young professionals should be afraid to be themselves, Visser added.

If a personal Twitter account is something one is proud of and often uses to communicate their points of view, Visser said she would encourage that person to include the handle on their business card.

“Don’t be afraid to include it simply because someone of a different generation might frown upon that,” she said. “Advocate for yourself and your professional development.”

Parks said she was at first a bit hesitant to mix her personal and professional worlds.

“But I think that is because a lot of times we think we must be different people in professional settings,” she said. “I soon realized that people often want to collaborate and connect with me because of the personal aspects that, I think, leave more lasting and memorable impressions.”

Visser said it is important to remember that professionals are not simply “ten different phone numbers.”

“I believe that my cards say, ‘This is me. If you need me, in whatever capacity, this is how you can reach me,’” she said. “And that’s that.”

The nationwide Young Nonprofit Professionals Network was created, Amanda Parks said, to provide professional development and networking opportunities for the next generation of nonprofit leaders.

“Young professionals who work in the nonprofit sector typically have different challenges when navigating their careers, many of which often can be eased by connecting with likeminded people,” Parks, board co-chair of YNPN-New Jersey, said.

This is especially important given that professionals are now looking to get more out of their day jobs than they once might have, Parks added.

“In speaking with my parents and other members of older generations, they might have liked their jobs, but worked more to provide for their families and a paycheck,” Parks said. “Yes, young professionals often have student loans that they need to pay off, but many of us still are not going to settle for a job that we don’t necessarily like or are not driven by.

“Even if the pay is less or the commute is longer, we want to do something every day that we enjoy while also having the balance in our personal lives. Your job should not be your entire life.”

Mallory Visser, a board member of YNPN-NJ since 2015, said that is why the organization is not only open to those under 30.

Devils are right on the money with sports gambling partnerships

Sandy-destroyed pier in Seaside gets reconstruction financing from Procida