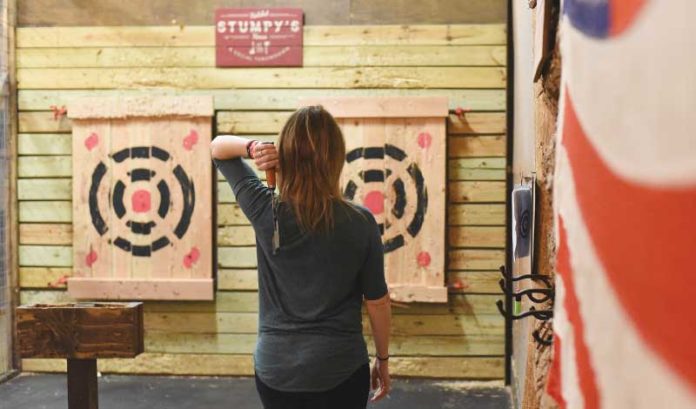 Kelly Josberger said she constantly is proud and surprised that an idea between friends at a backyard barbeque has since expanded into a business beyond her wildest dreams.

“I never thought that, in the two years after we opened Stumpy’s Hatchet House, that we would have a super-hot franchise and a place that people can go to be happy and learn something new,” Josberger said. “It has been incredibly satisfying.”

Stumpy’s Hatchet House in Eatontown, now a multimillion-dollar business, is expanding rapidly across the United States, including two new franchise locations in Fairfield and Green Brook.

Co-owners Kelly Josberger, Stuart Josberger, Trish Oliphant and Mark Oliphant said they had no idea this would happen at the start.

A couple of years ago, the Ocean County residents said they had returned from sailing one summer night when they decided to have a barbeque.

“Stuart was chopping wood for the chimenea when he and Mark started throwing the axe against a tree stump,” Josberger said. “It looked like fun, so Trish and I decided to join in.”

That encouraged Mark Oliphant, then a retired union carpenter, to build a target on a tripod, which in turn attracted attention from — and future game nights with — the neighbors.

“We thought, hey, maybe this would be a fun thing to do,” Josberger, then an elementary school principal, said.

Though Stuart Josberger was working as a school network administrator and Trish Oliphant was working for Ralph Lauren, the four friends decided to combine their savings and their diverse skills to open the first indoor hatchet-throwing facility in the country in April 2016.

The idea was to transform a drafty industrial space in an office park in Eatontown into something more reminiscent of a pine-scented cabin in Vermont — complete with eight throwing pits surrounded by fencing.

“When we first opened, people sometimes looked at us like we had two heads when we told them what Stumpy’s was,” Trish Oliphant said.

That is, until those people were invited to throw pound-and-a-quarter hatchets at targets made of multiple 2-by-4 wooden planks 12 feet in front of them.

The idea remained true to their vision. They could have installed a kitchen, but instead decided to partner with and promote local restaurants that deliver; they could have built a bar, but instead bought an ice machine and metal ice buckets to encourage clients to bring their own booze.

“We wanted to concentrate 100 percent on hatchet-throwing and the service we provide to our guests,” Oliphant said.

The simplicity of the concept, Josberger said, helped Stumpy’s hit $1 million in gross sales after being in business for just one year.

The concept was so successful, in fact, that the co-owners began the franchising process after being open for only six months.

“The word got out on Stumpy’s,” Oliphant said. “Now, we receive more than five inquiries a day and double that on weekends.

“People all around the country are wanting to open a Stumpy’s franchise location.”

Locations in San Antonio; Greenville, North Carolina; Fairfield; and Green Brook are expected to open with the next couple of months.

Franchisees in Bucks County, Pennsylvania; Tampa, Florida; and Austin, Texas, are in the process of securing the right location.

And others in Delaware, New York, Louisiana, Massachusetts and Pennsylvania are expected to close on a franchise by the end of this month.

“We’re hoping to grow as a company with input from our franchisees,” Oliphant said. “We take suggestions from the very first day that they sign on.”

“We’ve also been very selective in choosing our franchisees, because we want them to have the right vibe,” Oliphant said. “Opening a Stumpy’s Hatchet House is a 10-year commitment, which can be much like a marriage, and some marriages just don’t work out. We certainly don’t want to have to divorce our franchisees, so we are picky about who we pick.

“We want our franchisees to be like good friends who we want to hang out with who also have a passion for the new sport of hatchet-throwing.”

While Stumpy’s Hatchet House is on target to open 15 new locations this year, the brand created competition for itself by simply developing the concept.

“New Jersey certainly does have a lot of people who like to throw hatchets,” Oliphant said.

“But the competition, as much as I did not like it before, has really helped our business to grow by getting the word out about hatchet-throwing,” Oliphant said.

“We focus more on the celebratory and collaborative nature of hatchet-throwing, where people can come to hang out with their friends or team-build with their colleagues.”

Stumpy’s Hatchet House, complete with branded candles, large leather sofas, giant wooden Jenga pieces and free Wi-Fi, is meant to be a comfortable place for friends to order in a pizza and have a beer while having fun throwing hatchets, Oliphant said.

“One of the biggest challenges we have is getting people to leave after their two-hour time slot in the pits is over,” she added. “It’s just a great hangout spot.”

One that, even after two years in business, continues to exponentially grow.

“We are still experiencing a serious growth spurt,” Josberger said. “In our first quarter alone, we are up about 75 percent in revenue from this time last year.”

Summer reservations are already starting to book up, she added, with the Eatontown location alone serving nearly 600 people each week.

“We want to become a household name for adult indoor recreation,” Josberger said. “If someone is thinking about doing something on the weekend, instead of going to the movies or bowling, we want people to say, ‘Let’s go to Stumpy’s.’ ”

Trish Oliphant said her husband, Mark Oliphant, has created a new patent-pending target system to erase gaps in the schedule at Stumpy’s Hatchet House in Eatontown.

“That means we are now able to serve more people,” she said.

The co-owners had to screw 2-by-4 wooden planks into a frame after guests left a pit, which was time-consuming and noisy.

“We felt a real need to create a target system that would allow us to change out the boards more quickly between groups,” Oliphant said. “Now, we can change out boards that need to be replaced more quickly and easily, even during gameplay.”

Kelly Josberger said that has helped Stumpy’s increase its revenues quite a bit.

“The pits can now be changed over within a matter of minutes while the next group is in safety training instead of needing that half-hour in between groups for maintenance,” she said.

Co-owners Kelly Josberger and Trish Oliphant said they wanted to make sure Stumpy’s Hatchet House would appeal to both men and women when they opened the first indoor hatchet-throwing facility in Eatontown with their husbands, Stuart Josberger and Mark Oliphant.

So far, Trish Oliphant said, the concept has been successful in doing that.

“Our clientele is very much evenly split,” she said. “It is definitely not just a place where a bunch of guys come to drink and throw hatchets.”

In fact, the Eatontown location recently welcomed “The Real Housewives of New Jersey” to film and participate in the sport of hatchet-throwing.

“They were awesome,” Oliphant said. “We have also had not one but two baby showers here — and we featured on social media a 94-year-old woman who hit the bullseye.”

“We also had a Singles’ Night last week, in which about 50 people attended, and have monthly Industry Nights, which cater to professionals in the service industry, including bartenders, waitresses and restaurant workers, who cannot get here during the hours we are typically open,” Josberger said.

In fact, both Josberger and Oliphant said, they have seen it all: mariachi bands at a bachelor party; bagpipers on Saint Patrick’s Day; multigenerational birthday parties for both 30- and 60-year-olds; engagements on Valentine’s Day; and even “Let It Go” parties for those going through tough life experiences such as breakups.

Stumpy’s Hatchet House has even created winter and spring leagues that come in on Sundays to compete against more than a dozen teams at the price of $180 for a team of two for five weeks.

And, for companies that want to encourage their professionals to let off steam, the entire facility can be rented for less than $1,000 per hour.

“Our team-building events are very successful because they put everybody on an equal playing field,” Josberger said. “The majority of people who come in here have never thrown a hatchet and are therefore out of their comfort zone. We say that a company that throws together grows together.”

Still, what has contributed most to Stumpy’s Hatchet House’s success, Oliphant said, are the customers who the owners now know on a first-name basis.

“They come in once a month, always bringing in other people, especially from out of town,” she said. “Repeat business has become a much larger percentage of our revenue than we could ever imagine.”