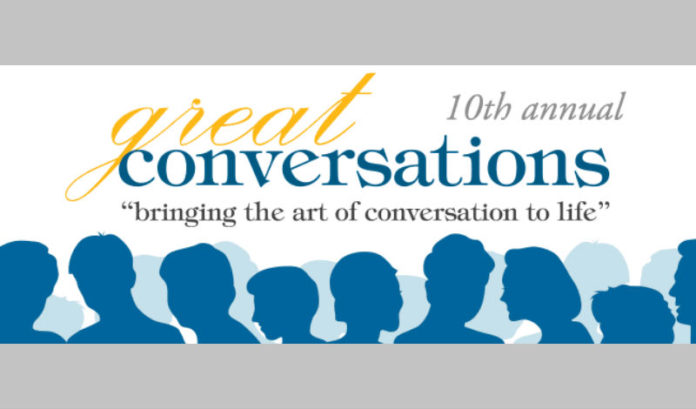 I’ll admit, when I first got the invite to be a part of “Great Conversations” — the annual fundraiser for Morris Arts — I had two reactions:

As the editor of ROI-NJ, I get dozens of invites for events each week.

None has been as creative and interesting as this one, which takes place Thursday, April 26, at the Madison Hotel in Morristown.

The concept is simple.

Instead of attending a gala to support an organization that does fine work in the community (and anyone in greater Morris County understands the efforts of Morris Arts), you can attend the area’s best dinner party and have a (wait for it) great conversation with an interesting figure in the arts, media, tech, health care, public service or business scene.

There will be a cocktail hour starting at 6 p.m., followed by table seating at 7:15.

Among this year’s conversationalists are a New York Times bestselling author, a robotics expert, a jazz saxophonist, Stanley Cup champion, a Medal of Honor recipient, a world-famous climate scientist, a celebrated chef and other similarly fascinating and accomplished individuals.

Such as one of the people who helped co-create Public Enemy (Bill Stephney);

Or one of the leaders of New Jersey tech scene and creator of the Propelify event (Aaron Price);

Or the woman who makes it her business to promote the success of other women entrepreneurs (Linda Wellbrock);

Or the person who picks all of the art for Novartis in North and South America (Joanne Del Rio);

You get the point.

There are only a few days left to register.

So, sign up fast at this link … or you might get stuck at a table with me.

Why case for offshore wind is now stronger than ever