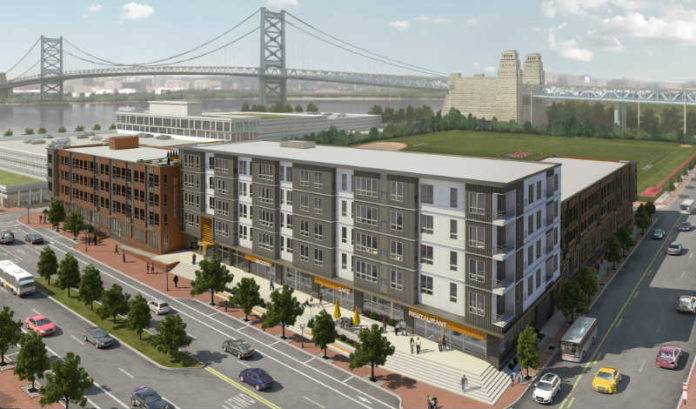 “Ten years ago — even five years ago — almost no one believed in Camden’s potential, and now look where we are today,” Mayor Frank Moran said. “The city has seen a remarkable turnaround — from a dramatic drop in crime, to historic gains in our schools, to billions of dollars in new investment, including today’s announcement. Together, we are making Camden a real destination to live, work and play.”

“The investment of private capital is critical to Camden’s future, because it helps create jobs for city residents and newcomers alike,” Nash said. “These new market rate apartments are a major step forward in Camden’s progress and a clear sign its future is brighter than it has been in decades.”

CP Residential, the owner of the building, is a partnership between The Michaels Organization, NFI and Conner Strong & Buckelew — all of which have announced they will move their headquarters to an office tower currently being constructed near 11 Cooper. M&T Bank is the sole lender for the project.

“Camden is back to being the economic engine of South Jersey and returning to the pantheon of creativity and innovation that it was 50 years ago,” Cruz-Perez said. “This development is critical to that ongoing evolution to fill a vacuum of market-rate housing with amenities that new employees and young professionals will be looking for here in the city.”

John O’Donnell, president of The Michaels Organization, said: “Our residents will have great access to transportation, entertainment, shopping and the employment and educational opportunities of Camden’s renowned ‘Eds and Meds’ community. We could not be more proud to be part of Camden’s revival.”

Tim Lizura, president of the New Jersey Economic Development Authority, talked about the momentum the project is brining.

“We couldn’t be more excited to see the end result,” Lizura said. “Together, 11 Cooper and the many other waterfront developments will provide the kind of economic boost that Camden has been awaiting.”

Apartments will begin to lease in October, with delivery expected by spring 2019. Of the 156 units, 20 percent will be affordable housing for residents earning 80 percent or less of the area’s median income.

The building is being billed as an efficient building, and includes amenities such as a residential lobby with 24/7 concierge services, a business center, bike storage, a fitness center, and club room with adjacent roof-top terrace, on-site parking for more than 190 cars.

The building will also include 5,000 square feet of street-level retail space.

Report: Deteriorating relationship between Jersey City, Kushner Cos. has One Journal...