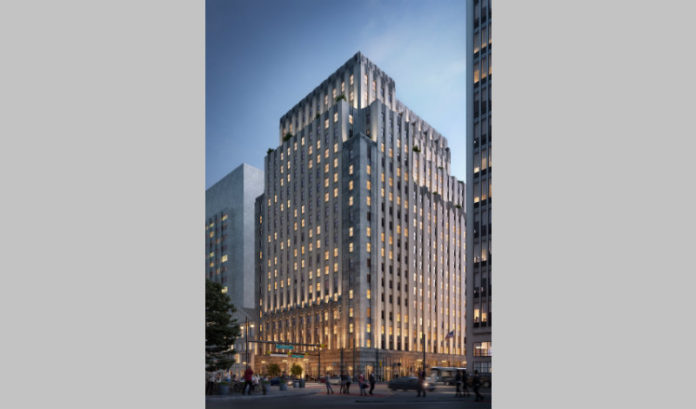 Some of the country’s largest financial firms are teaming up to invest in Newark and make it a 24/7 city, as evidenced Monday at the groundbreaking of 540 Broad St.

“When we know where third base is, we will be well on our way.”

He said the company was making “a real dent into the goal that Newark has for itself for a 24/7 community.”

The 540 Broad St. site is the former New Jersey Bell building. It will include 265 residences — 20 percent of which will be affordable, for families earning 40 to 50 percent of the area median income — but no parking, and will include more than 80,000 square feet of Class A office and retail space from the bottom floor to the fifth floor, including Verizon’s regional offices, which will remain on the fourth floor. Floors six to 21 will be all residential.

The Art Deco building was built in 1929 by Ralph Thomas Walker for the New Jersey Bell Telephone Co. and features a majestic lobby and brick-and-sandstone exterior.

Mayor Ras Baraka called the rehabilitation of the building a milestone for the city.

“The rehabilitation of 540 Broad St. is a milestone in our strategy to reinvent a downtown where nobody once lived as a mixed-use neighborhood incorporating affordable and market rate housing as well as a thriving office and retail hub,” he said.

The project is being supported by Citi, Goldman Sachs and, unsurprisingly, Prudential Financial.

Ommeed Sathe, head of impact investments at Prudential, said the company has been intentional about its investments in the city.

“Not only in our own headquarters, but in the community around us,” he said. “For us, what’s really important is adding to the residential density of downtown. We are so bullish on the future of Newark. But one of the things that is challenging is downtown has historically been almost an entirely office and retail destination, and there is very little in the way of actual residential ability. And if you look at the way the world is going and what people expect out of downtowns, they want them to be 24/7 places. To allow that to happen we really need to get residential product on the market.”

And it helps that whatever has been brought onto the market is fully occupied.

The additional residential offerings are a benefit to Prudential and Goldman as well, since their workforce can live and work in the area.

Margaret Anadu, head of the Goldman Sachs Urban Investment Group, said the company considers Newark part of the regional economy for its locations in Manhattan and Jersey City.

Goldman has made investments in other parts of Newark, including on community-based projects like parks and community centers, but the apartments are the first of their kind for the company.

“Our New York headquarters are right in Lower Manhattan, and we have another significant building in Jersey City, and, even with those two buildings, Newark is part of that regional economy,” she said. “One of the things people talk about Newark a lot is it’s 20 minutes to Manhattan. There could certainly be people who work at Goldman, either at our New York office or Jersey City office, right from this building and it would be incredibly convenient and affordable. That’s an exciting thing, not just for Goldman, but all the businesses in this broader regional economy.”

And the goal is to attract even more businesses and their workforce to Newark.

“It’s really symbolic of what Newark is doing here. It’s taking its own assets, using what it already has — the beautiful buildings, the parks, the access to transportation — and really putting the pieces together,” Anadu said.

L+M is already talking to other interested parties that may soon join the market, Cortell said.

“This is an extraordinary opportunity to continue what we started at Hahne’s (the Hahne & Co. building) and do so in a significant, meaningful way,” he said. “That mixed bag comes together again to do something of a similar scale. Something bold that is visible from the skyline that will satisfy the same slew of uses. We’re not predisposed to doing mixed-use in the manner we are doing here, but we find ourselves on the heels of Hahne’s doing a similar reprise. Hahne’s has made us bullish about residential demand, as 100 percent occupancy has been a pattern over there.”

One of the benefits of the Bell building is the 1920s architecture, which includes concrete slabs. That means residents on each floor are shielded from excessive noise from their upstairs neighbors.

Deputy Mayor Carmelo Garcia said the preservation of the building is a key to its uniqueness.

“You’re going to have, definitely for the Class A side, a Manhattan corporation that is going to relocate their headquarters and employees to Newark, because we have the live, play, work model and I think right now that’s what everyone is looking at. And the affordability,” he said.

That last part is especially important as the spillout from New York City, which is now creeping into Jersey City and spiking prices of residential units, bleeds over into Newark.

John Heppolette, co-head of Citi Community Capital, said the company was thrilled to be part of the team of a complex redevelopment.

“When completed, this project will bring mixed-income housing and commercial and retail space to a community that has been underserved,” he said.

The project is being funded through a mix of public and private sources.

The New Jersey Housing and Mortgage Finance Agency provided $15 million in tax-exempt bonds. Citi Community Capital provided about $70 million in debt construction financing and about $14 million in equity from the sale of Historic Tax Credits through the National Trust Community Investment Corporation. The sale of low-income housing tax credits from Goldman Sachs UIG, as well as financing from Prudential Financial and sponsor equity also helped fund the project. Additionally, an allocation of $14 million in New Market Tax Credits, made available by Goldman Sachs UIG and NJ Community Capital, will facilitate the leasing of the nonresidential units.

Kushner completes purchase of ocean block next to Pier Village, will...