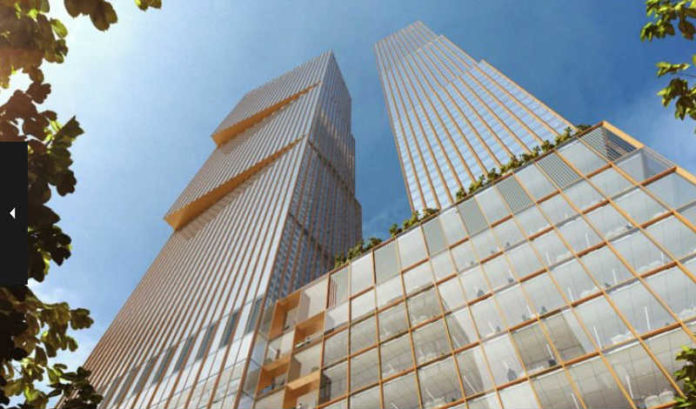 The One Journal Square project, a transformative pair of 66-story residential towers in the large dirt lots across from the Jersey City PATH station, has been the subject of repeated and contentious emails between developer Charlie Kushner, head of the Kushner Cos., and Jersey City Mayor Steve Fulop, the Associated Press reported Monday night.

The disagreements between the two mean the project, which has faced delays and remodels since it was first announced in 2015, may never get started, the AP reported.

When the project was approved, Kushner Cos. was run by Jared Kushner, the son-in-law of President Donald Trump, who has recused himself of company business since moving to Washington, D.C.

Jared’s father, Charlie, who founded the company, told the Associated Press last night that his son’s connection to the president turned Jersey City officials against the project.

“It is crystal-clear that (Mayor Steve) Fulop is now playing politics,” Kushner Cos. said in a statement to the Associated Press.

The city told the Associated Press the company has missed a key deadline to begin construction and defaulted on a payment it owed to the municipal government last year.

“It should be obvious to everyone that the Kushner’s claim that the mayor needed to ‘play politics’ to win votes has no merit,” city spokeswoman Hannah Peterson said in an email. “This is a false argument that is being used to explain why things didn’t go their way.”

The project has been the subject of controversy for nearly a year.

In May of 2017, the Washington Post reported representatives of Kushner Cos. were soliciting funding for the project from Chinese investors under the EB-5 visa program.

While such funding is legal and used on a regular basis for projects of this magnitude, some felt the Kushner family was leveraging its connection to Trump to raise funding.

Kushner Cos. also dropped its request for a 30-year tax abatement from the city.

Despite this, a scaled-back version of the project was approved last September and representatives from Kushner Cos. said it was “shovel-ready” for 2018 in January.

The Associated Press said relations between the parties were deteriorating behind the scenes. In February, representatives of Kushner Cos and KABR Group (a partner in the project) said the city cut off discussions on the project and that Kushner Cos. and KABR were considering legal action.

The Associated Press said the city sent a letter back blaming the delays on the two developers for changing their original plans and said the partners had failed to make a $40,000 payment to the city.